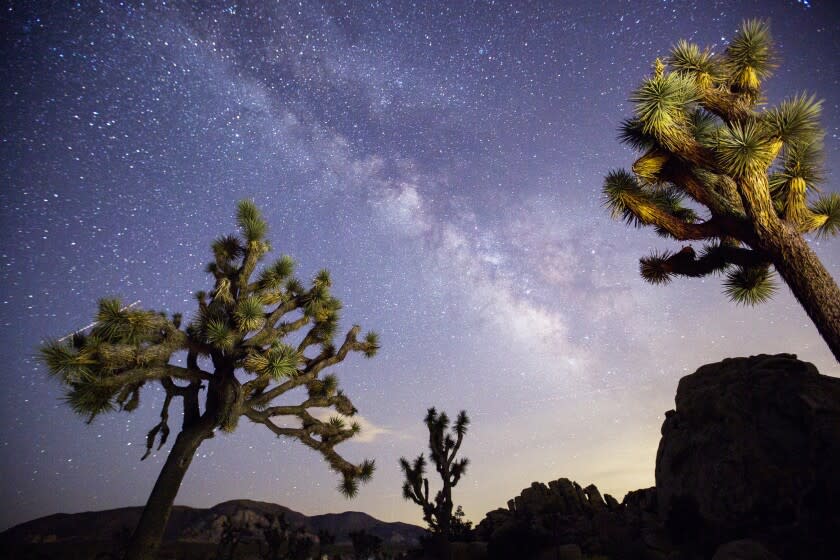 After eight hours of tense debate, the California Fish and Game Commission found itself in a 2-2 stalemate on Thursday over whether to declare the Western Joshua tree an endangered species, forcing discussions on the volatile issue to continue until further notice. ‘in November.

Staff biologists had already recommended not to list the species after concluding that claims in a petition filed by environmentalists about the effects of climate change on the living symbols of the Southern California desert were premature.

They questioned the reliability of computer models suggesting that the species is in decline throughout its range. They said this is because although there has been a decline in the western Joshua tree population in some parts of its historic range, in other areas the species number by millions.

But the petition filed by the Center for Biological Diversity has sharply divided commissioners, two of whom resisted the staffers’ recommendation and instead sided with conservationists who fear that in the absence of special state protections, the species will lose 90% of its range by 2100.

Among the dissenters was Samantha Murray, chair of the commission, who worries that the Western Joshua Tree “may already be in significant decline or functionally extinct in some southern parts of its historic range.”

“So for me, there’s not a lot of uncertainty about the future of the western Joshua trees,” she said.

Unable to move forward on the issue, the panel voted unanimously to reopen the discussion at its November meeting, leaving temporary protections offered to applicants in place until definitive action is taken. .

He also asked Chuck Bonham, Director of the State Department of Fish and Wildlife, to prepare a report on the viability of developing a range-wide conservation plan for species, which would include input from stakeholders including conservationists, lawmakers, tribal leaders, property owners, renewable energy companies, labor organizations and the construction industry.

But critics saw the panel’s failure to act on the petition filed more than a year and a half ago as a failure of the state’s environmental legislation process.

“It’s extremely disappointing when, time and time again, senior California officials talk about being leaders on climate change,” said Brendan Cummings, director of conservation for the Center for Biological Diversity and co-author of the petition. , “but when tasked with making a decision that would help solve the problem, they back down. It was this behavior that created the climate crisis we face today.

Voting against listing the species would leave the fate of local jurisdictions over thousands of acres of desert real estate.

Nearly half of the Western Joshua tree’s range is on private land which includes the fast growing communities of Palmdale, Lancaster, Hesperia, Victorville and yucca valley.

Many residents and decision-makers in these communities describe the petition as overbroad because species scientists know that Yucca brevifolia is already protected in many city and county native plant ordinances, and within 800,000 acres Joshua Tree National Park. Listing the species, they added, would hinder job creation and development.

The Western Joshua tree is one of two genetically distinct species found in California. It has a boomerang-shaped range that extends west from Joshua Tree National Park to the northern slopes of the San Bernardino and San Gabriel Mountains, then north along the eastern flanks of the Sierra Nevada, then east to the edges of Death Valley National Park.

The eastern Joshua tree’s range in California is centered in the Mojave National Preserve and eastward into Nevada. Up to 1 million Eastern Joshua trees were incinerated by the 2020 Dome Fire on the reservation.

The fate of the western species, which reaches about 40 feet in height and lives about 200 years, is the most uncertain.

But drought, hotter and drier summers, bushfires and development are taking a heavy toll on the trees and the species they support. Some stands have not reproduced baby trees for decades.

According to scientists, the western Joshua tree’s low reproductive rate may prevent it from expanding fast enough into cooler, wetter habitat. The tree’s ability to move is about a few hundred meters per generation.

In a separate case, the commissioners agreed to return the Temblor legless lizard a candidate for listing as endangered – a move that provided the sand-swimming reptile with legal protection for at least a year.

Oil spills and other chemical pollutants plague the shrunken Legless Lizard Estate in the southern San Joaquin Valley, which is covered by about 31 oil fields. according to a listing application submitted by the Center for Biological Diversity.

“It warms my heart,” said Shaye Wolf, director of climate science for the center, “that these rare and fascinating lizards will be able to burrow, hunt and breed safely, protected from the oil drilling that poisons the home in which they have evolved over millennia.”