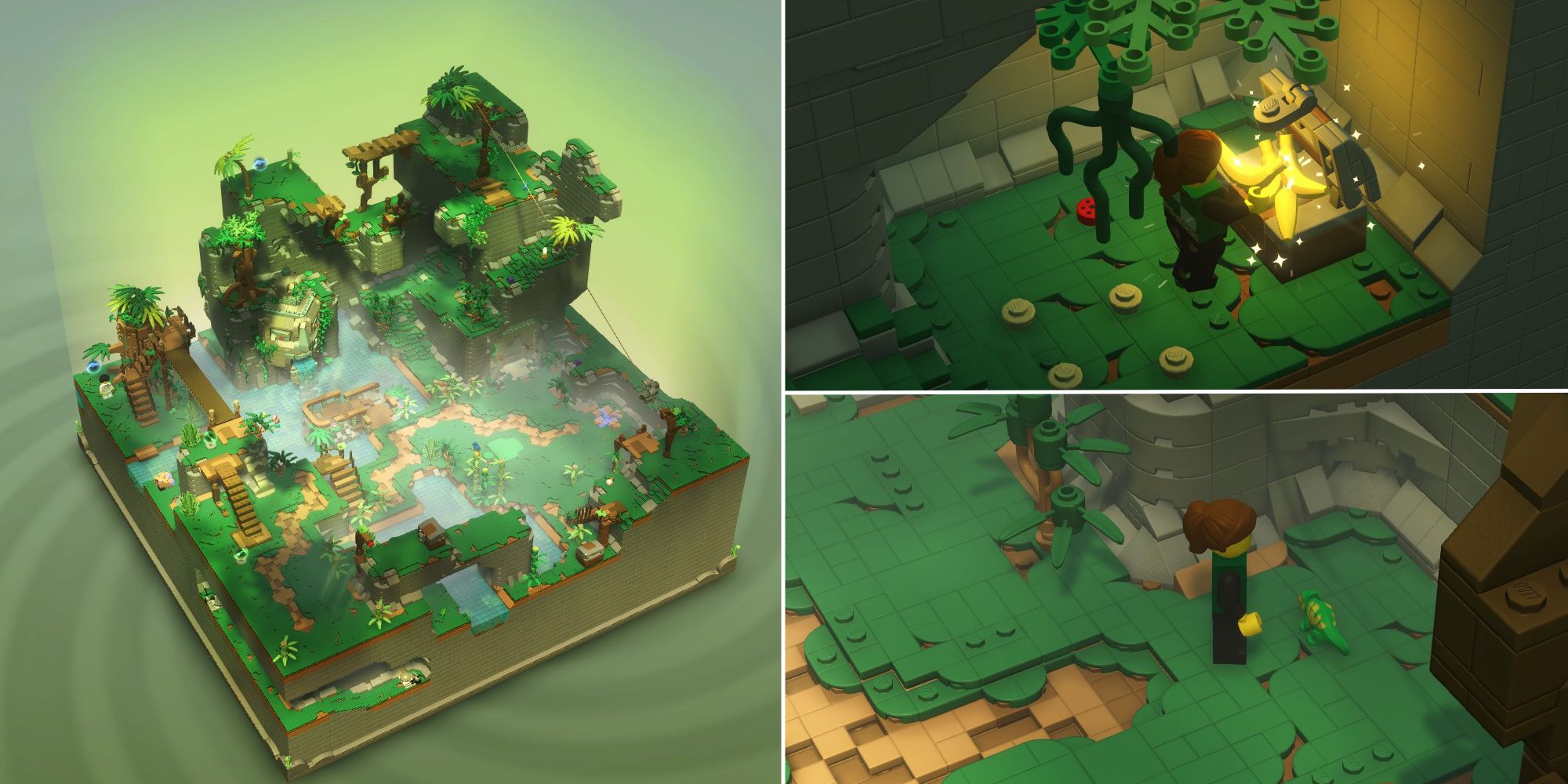 The worlds you will visit LEGO Brick Tales are filled with collectibles, from hidden animals to treasure chests! Most require one or more of the skills you’ll learn along your journey, so you can expect to see several items you’ll need to return to once you have the proper abilities. Since the Jungle is the first world, you will return here often as new paths open up.

This guide lists all the chests and hidden animals in the jungle, grouped by type. If you’re missing any, read on to find these latest elusive collectibles!

To the left of the first monkey statue is a blue bird waiting to be picked up. Once you cross the river after learning Smash, you can collect it.

Before building the zipline, be sure to pick up the bird near the edge of the cliff!

Once you’ve learned all five skills, go to the top of the mountain and use the ladder to go back down into the cave. Follow the path to the next room and up the stairs to your left. Hit the bamboo blocking your path, then use Dimension to reveal a Hover Rail. The rail will take you to the top of the chamber, where you will find a bird.

In the room at the top of the caves, look around the corner for a teleporter (it’s the same one used to retrieve a rabbit; see below). At the end of the rabbit platform, use Dimension reveal a Hover rail which will take you to the bird at the top of the chamber.

To the left of the platform where you first meet the Archaeologist, look in the bushes for an easy-to-capture chameleon!

Exploring the Monkey Temple will open a door to the top of the mountain. From this entrance, follow the path south until you come to a blue arrow leading to the next room. On the other side, you’ll find a set of bamboo stalks that can be destroyed using Smash. Beyond is a chameleon to save.

After completing the Medieval World, return to the Explorers Base Camp. On the right side is a large pile of dirt – wash it with the Water skill to reveal the chameleon below.

Once you have completed the town, go to the very beginning of the jungle. Use the dimension skill to reveal a teleporter on the right. Using it will take you to two more teleporters; Use the right buffer to reach the chameleon by the river.

At the very beginning of the Jungle world, you will see a ladybug to your right. You can’t access it until you learn the Smash skill. Be sure to pick it up when you come back this way later!

After using the gyrocopter to reach the reporter on top of the mountain, go down the hill on the right side. You will find a ladybug behind some bamboo stalks that you can break.

Once you have learned the Water skill in the Medieval World, return to the Explorers Base Camp and enter the Monkey Temple. In the second room, look for a pile of dirt just to the left of the entrance. Wash it off to reveal a ladybug.

After completing the town, return to the scaffolding you built to cross the jungle cliffs on your way to the top of the mountain. Look for a teleporter that you can activate with the Electricity skill. Follow the path at the other end of the teleporter to find a ladybug.

After learning Smash at the Skill Temple, look at the riverside near the platform where you first met the Archaeologist. Smash your way through the bamboo to reveal a Hermit Crab.

When you reach the explorer base camp, there is a staircase to the south. You can pick up a hermit crab at the top. You can also collect the crab after ziplining down the mountain.

After building the monkey statue to enter the caves, you’ll need to use Smash to get through a bunch of bamboo on the second floor. The main prize here is a chest, but if you look closely you will see a narrow passage leading behind the cave which was hidden by the bamboo. Follow it to find a Hermit Crab against the edge of the map.

Once you learn the Hover skill in the Caribbean, travel to the bottom of the zipline at the Explorers Base Camp. To the right you will see a Hover Rail. Climb it to reach the Hermit Crab on the ledge above.

After building the gyrocopter, be sure to check behind the reporter’s tree at the top of the mountain. You will be rewarded with a bunny for your troubles!

Once you learn the Water skill in the medieval world, go to the area just before Boo’s shop where you built the scaffolding to climb the cliffs. To the left you will see a pile of dirt. Wash it to release the bunny underneath.

When you learn the Electricity skill, go to the starting area of ​​the jungle. Cross the first bridge you built and drop down to ground level. On the other side of the creek is a pile of earth which you can wash from afar with the Water skill. Once the teleporter below is finished, return to the starting point of the world. Reveal a teleporter to the right using Dimension, then use it to reach a fork in the road.

Use the left teleporter to reach the pad you just washed. You will be rewarded with a bunny for your trouble!

When you’ve completed the city world and learned the Electricity skill, return to the mountain cave, entering through the ladder at the top of the mountain or via the monkey temple. In the corner, you’ll find a teleportation pad, which leads to a previously unreachable rabbit.

The first chest you can access in the jungle can be opened after completing the Temple of Skills. Just before the ladder leading to the exit, there is a bridge that can be crossed to the left. Be sure to collect your reward before continuing your adventure!

After receiving the archaeologist’s whip, back to the very beginning of the scene. You’ll be able to climb up to a chest above that you couldn’t reach before.

Once you’ve built the monkey statue to enter the cave beyond, you’ll see a chest as you explore. Use Smash to destroy bamboo stalks blocking your path.

Look under the stairs south of the Explorers Base Camp. Hit the bamboo stalk blocking your path and open the chest behind it. Then go up the stairs to access another chest.

Up the stairs south of base camp, walk along the edge of the map. At the end of this course, you will find a hidden treasure!

North of the Explorers Base Camp, there is a hill you can climb after using Smash to cross the bamboo blocking the way. At the top, look to your right to find a chest under an overhang.

At the top of the mountain, which you can reach after building the gyrocopter, go down on the right side and look under the cliff. The chest is hard to see with the base camera angle, so use the smoke from the crashed plane as a guide.

You can rotate the camera from the pause menu to inspect your surroundings in detail!

Accessible after completing the desert

Once you have the dimensional skill, go to the first chamber of the caves, entering where you built the monkey statue. On the second floor, take the narrow passage behind the chest on the main path. In the corner, use Dimension to reveal a valve. Turn it to open a door elsewhere in the caves.

Return to the first floor and go under the natural bridge in the middle of the room. You will need use Smash while your character is obscured by the bridge to cross hidden bamboo stalks. Enter through the newly opened door to find a new chest.

When you learned the dimensional skill in the desert, come back to the jungle and go to the area where you built the gyrocopter. Use the whip to reach the cave entrance, but instead of entering, look in the left corner. You will find a seemingly empty area. Use Dimension to reveal a chest.

Accessible after completing the city

After completing the city, go to the jungle and enter the caves through the main entrance, by the monkey statues. Look immediately to your right and you will see a pile of dirt that may be washed away with the Water skill. Below is a teleporter, which activates once it is cleared. Climb the ladder behind you and use the electricity to reach the teleporter. Spin the wheel you find to lower the barrier to the right, then return to the main area to grab the chest that was behind it.

Then go back to where you built scaffolding to get over the cliffs. Near where the puzzle started you will find a teleporter. Take it and follow the path using the whip and the Smash skill to clear the way. At the end of the trail is a chest.

Accessible after completing the Caribbean

After completing all five worlds, back to the top of the mountain. Stand near the cave entrance and use Dimension to reveal a Hover Rail. The rail will lead you to a chest hidden under the main path.

When you collected every chameleon in the game, bring the twenty to the biologist to the right of the twin monkey statues. He will give you the last jungle treasure chest as a reward.

Next: LEGO Bricktales: All the Caribbean Puzzle Solutions

Let’s take a trip through the savannah on Kilimanjaro Safaris at Animal Kingdom!