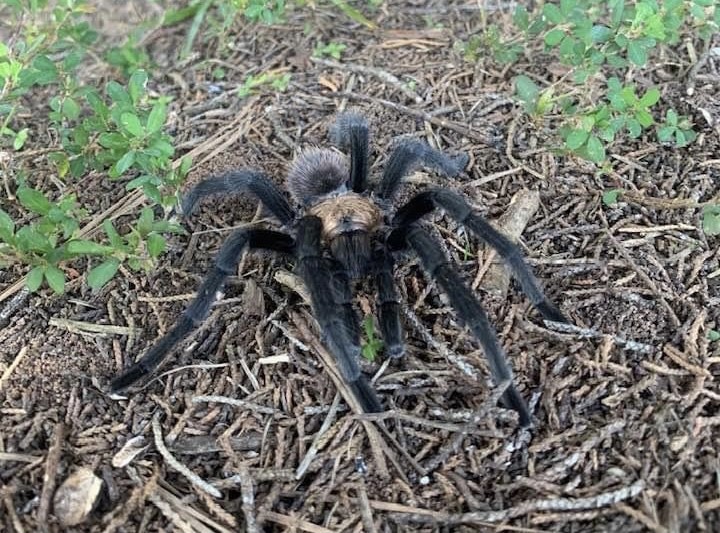 SHREVEPORT, La. (KTAL/KMSS) — Did you know that there are tarantulas native to northwest Louisiana? Or that they don’t weave webs to trap their prey as seen in horror movies?

Imagine living the life of a lone hunter, using a tripwire to catch your food, and being so misunderstood by people that they often scream and run away when they see you.

Such is the life of the tarantula species native to the region, Aphonopelma hentzi.

The dark brown and black tarantula is also occasionally seen in Mississippi, but reportedly does not sing as well as Aphonopelma johnnycashia species of American tarantula that was recently discovered in the foothills around Folsom State Prison in Northern California and named after country singer Johnny Cash.

Tarantulas native to Louisiana, Texas, and Arkansas are good natured and non-venomous to humans as they are considered “new world” tarantulas. Their bites seriously harm humans only in case of allergic reactions.

Female tarantulas native to the NWLA can lay up to 1,000 eggs in a web they form like a hammock, but they do not weave webs otherwise. And the females live up to 40 years, while the males live around 10 years, possibly because the females eat the males after mating.

Aphonopelma hentzi have tiny claws on the end of their legs that allow them to climb and cling to walls and ceilings, but they prefer to be underground. They will create doorways with their spider silk and use the substance to cover parts of their burrows to hide from predators.

Our native tarantula hunts at night, sensing the vibrations of prey through clawed feet and body hair, always ready to pounce once prey movement is detected. Once Aphonopelma hentzi grabs its prey with strong front legs, it bites to inject venom and paralyze the tasty treat before using fangs to kill the prey and inject digestive enzymes that will turn the dinner into a chewy liquid.

You should, however, be terrified of our native tarantula if you are a grasshopper, cicada, beetle or caterpillar, woodlouse or small bird, lizard or toad, frog or small rodent, bat or little snake.

Aphonopelma hentzi does not hunt humans, so there is no need to fear our native tarantula.

Poisonous plant in Louisiana can kill livestock and pets

What are our native tarantulas afraid of?

The park has been in Shreveport for 46 years and is part of Caddo Parish Parks and Recreation. WBJMNP has hiking trails, live animals, a small exhibit hall, a puppet theater, puzzles, games, a room with native Louisiana snakes, and the ever-lovely Aphonopelma hentzi.

“We have almost five miles of hiking trails, and we have a birds of prey aviary outside with eagles, hawks and owls, and we have a whitetail deer on display. And you have self-guided nature exploration with free downloadable educational mobile games for families that you can download, and it has missions for you,” said Rusty Scarborough, park manager for WBJMNP. They call it augmented reality and location-based challenges, and it gets people active outside and well, the challenge these days is to get people active and away from their digital devices, but we’re trying to use their digital devices to make them active.”

Projects to update the natural park are also underway.

“We will demolish our existing structure and rebuild a 13,000 square foot, $9 million museum,” Scarborough said.

On the November 8 ballot, there will be a mile of debt service, six bond proposalwhich is a renewal of an existing mileage.