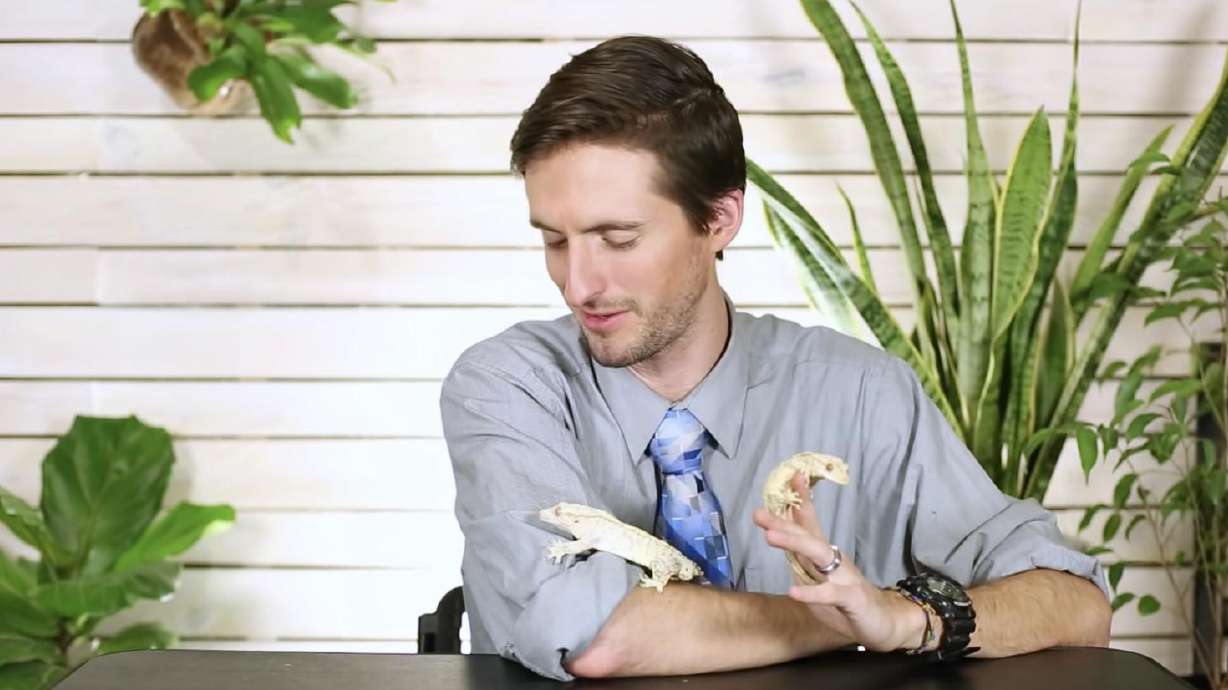 SPRINGVILLE – Few, if any, animals inspire more fear than spiders, bats and snakes.

But Clint Laidlaw is on a mission to educate the public and evaporate the fear of at least two of the three.

The interactive experience at Clint’s Reptile Room – full of arachnids, boa constrictors and more – is housed in a historic 19th century building on Main Street in Springville, complete with original brickwork, mural and stained glass.

Laidlaw has undergraduate degrees in zoology and biological sciences and a doctorate in biology, and he has taught at both Brigham Young University and Utah Valley University. And thankfully, her love of reptiles has translated well into the classroom, as reptiles offer a unique ability to teach hands-on in a way that most other wildlife cannot.

As a child, Laidlaw loved animal documentaries and taught himself, but even throughout his college years he disliked traditional school.

“It was always amazing to me that my college professors could take something I love so much, go home and study in my spare time – and get all the enjoyment out of it,” did he declare.

Laidlaw recalls a single hands-on classroom experiment with animals at university, involving a hibernating mammal. Early in his teaching career, however, a few crested geckos and ball pythons enabled Laidlaw to do for his students what his teachers failed to do for him.

“In education, most of the time we teach people the answers to questions no one asks,” the reptile enthusiast said. “As soon as you bring in a real live animal, they want to know everything.

“If you bring the right animal, it will ask you all the questions you hoped to answer.”

As Laidlaw was finishing up his doctorate – and barely getting by, financially speaking – his young nephew asked if he could bring some reptiles to the nephew’s birthday party. He did, and the guests and family in attendance were treated to a presentation that left everyone telling him he should keep doing it for a living. “Clint’s Reptile Parties” was born, and educational presentations in local school classrooms soon followed.

Fast forward two years and a regular weekly “guy lunch” with two tech entrepreneurs, who are lifelong friends – eventually led to the three brainstorming ideas for a business they could start together. Laidlaw quickly told them that he wouldn’t have much to offer in business, but one of his friends proclaimed that the animal lover would actually be the key to everything: they wanted to start a YouTube channel on the reptiles.

The wife of one of the men, who is a professional photographer, joined in 2017, the Clint’s Reptiles Chain hatched. Today, the channel has over 460,000 subscribers and has allowed Laidlaw to focus full-time on his reptilian endeavors. His teacher’s uniform consisting of a shirt and tie, and “well, hello!” kick off each video, have become his trademark.

The channel is probably best known for introducing hobbyists to a variety of reptiles that make great pets and dissuading some of those that may not.

Laidlaw also takes viewers into the field, where he puts his biology degrees to work. This summer, he and a few colleagues spent two weeks in the Amazon rainforest in Peru – videos of these adventures have already been shared on his channel, including two members of their party submit to painful Bullet Ant stings – for science.

While developing the YouTube channel, Laidlaw was still taking reptiles into classrooms for presentations all over Utah. As the workload increased, he taught others to be in classrooms he didn’t have time to handle. He and his wife, Leisha Laidlaw, began discussing an idea for an interactive education and training center that would allow them to reach as many people as possible, including parents of school children who seemed to enjoy the presentations.

In December 2019, they moved into Clint’s Reptile Room.

Everyone’s life would be very different soon after.

In May 2020, the hall was officially open and housed most of the animals, but had not yet welcomed any audiences.

“Do I close it now or wait until the money is completely used up and then close it?” Laidlaw remembers thinking. “These seemed like the only two options at the time.”

The COVID-19 pandemic had only just begun and no one knew how long its crippling effect would last.

One of his YouTube channel partners suggested hosting venue tours virtually, with online payments, and it saved the business. The YouTube channel attracts hundreds of thousands of visitors from all over the world, as do the virtual tours of the halls.

Clint’s Reptile Room is open to the public on Monday and Friday evenings, and parties and events can be scheduled by appointment. The room does not look like a typical reptile zoo. A sofa and a large table with benches allow people who are a little nervous to get started right away, to settle down and assimilate at their own pace. The open floor space means tortoises and turtles, as well as a large tegu lizard, can interact with and be fed by guests.

Laidlaw makes a point of noticing anyone who may be nervous and quietly focuses a little more attention on them, because it’s impossible for anyone to lose the fear of an animal they know nothing about, or only know about. myths. These guests are usually active participants when the evening ends, he said. Above all, Laidlaw strives to educate all who visit, rather than just entertain them – the focus is on the animals themselves.

If you bring the right animal, it will ask you all the questions you hoped to answer.

The YouTube channel and, more importantly, Laidlaw’s love of breeds, helps expand interest and knowledge of reptiles in Utah. There are now two reptile shows each year in the state, and several nationally known and respected captive reptile breeders are located in the state.

“Reptiles are not only fantastic pets, but they work more with people’s lifestyles than most animals that people (generally) think of as pets,” he said. “Snakes and other reptiles aren’t for everyone, but I think they are for more people than even dogs.”

And. he would know. He has a dog and dozens of reptiles.