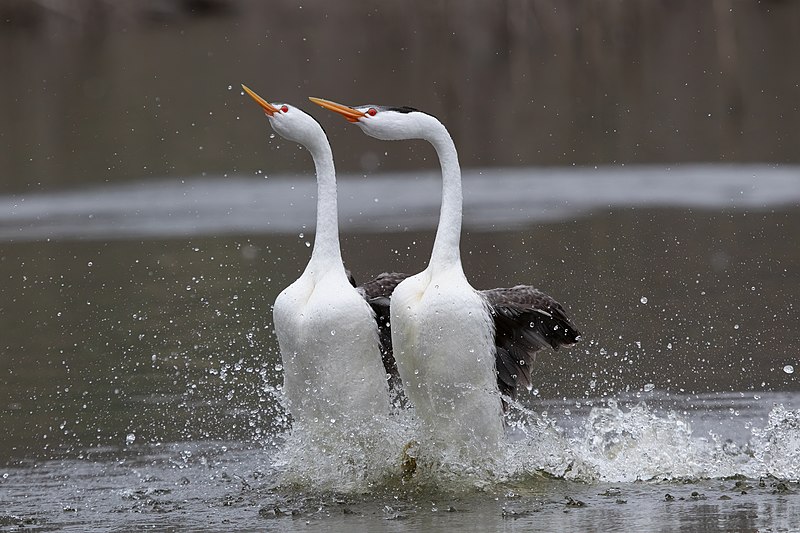 Using their large feet and quick stride, Western and Clark grebes can run up to 20 meters across water, making them the only bird and heaviest animal on Earth capable of doing so.

If you exclude Jesus Christ, whose biblical feat of walking on water is literally considered a New Testament miracle, only a handful of creatures are known to be able to walk or run on water. They are mostly small insects, but there is also a small basilisk nicknamed the Jesus Christ Lizard for very obvious reasons, but the largest of these are both bird species – the Western Grebe and Clark’s Grebe. They can run on water for up to 7 seconds and for distances of around 20 minutes as part of an impressive mating ritual.

Unlike spiders and gnats which rely on their extremely light frames to adhere to the surface of the water, western and Clark’s grebes rely on other unique advantages to run on water. These birds typically weigh between one and a half and four pounds, making them considerably heavier than other water-walking animals. In fact, they are the heaviest animals capable of this remarkable feat.

For years, the ability of Western and Clark’s grebes to stay afloat for considerable distances as they run across water has eluded experts. Then, in 2015, a team of American scientists analyzed images recorded using high-speed cameras to try to understand how the birds moved their legs. They discovered that the grebes relied on their large feet and extremely quick steps to perform their little miracle.

Specimens of both of these bird species use their broad, lobed feet to strike the surface of the water, which generates about half the force needed to counter their weight. The way they lift their feet out of the water – sideways – also helps reduce friction. But that alone is not enough. Grebes are also able to move their feet at a very high speed, taking up to 20 steps per second.

Interestingly, Western and Clark grebes only perform their water run, also known as “rushing”, during their mating rituals, which means scientists can’t just take specimens into a laboratory and have them reproduce the ritual. Because ruching has so far only been analyzed in the wild, using video footage, a mystery still remains around how grebes use their feet underwater.

Although 7 seconds of running on water might not seem like very long, it’s actually extremely impressive for a bird as large and heavy as the grebe, and some scientists refer to their ability as a kind of “magic”. .

Once considered the same species, Western and Clark grebes are nearly identical, and the unique characteristics of each are so subtle that only experienced birders can tell them apart.