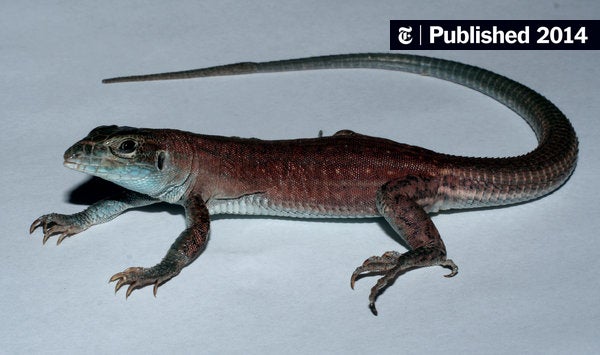 Four of the new hybrids were females. To the delight of scientists, females could clone themselves – and offspring could produce their own clones. Today, scientists have a colony of 200 of these lizards.

Eventually, scientists became convinced that they had produced a new species. They pitched the idea to Charles J. Cole, a herpetologist at the American Museum of Natural History who has been studying whiptail lizards since the 1960s.

“As soon as they told me what they had done, I knew it was a species,” Dr Cole said. The lizard’s body was clearly distinct from its parent species, and the fact that the species emerged in a lab doesn’t seem relevant to Dr. Cole.

“It’s not a manipulation of the Frankenstein genome,” he said. “They’re caged lizards doing their thing.”

Dr. Cole agreed to help Dr. Baumann and his colleagues formally describe the new species. Dr. Cole has carefully cataloged the many features, both striking and subtle, that set the new lizard apart from other known species of whiptail. They named it Aspidoscelis neavesi in honor of Dr. Neaves.

“These lizards should have their own species,” said Laurence M. Hardy, a biologist at Louisiana State University Shreveport, who was not involved in the study. He said they met the formal requirements.

But David Hillis, an evolutionary biologist at the University of Texas, questioned whether a line of hybrid whip-tailed lizards should be considered a true species. “It’s widely practiced, but often questioned,” he said.

Traditionally, scientists have looked at how animals reproduce to decide if they really represent a species or just a subspecies. Animals within an actual species produce offspring primarily with each other. As a result, their genes mix into a single gene pool.

This new species of lizard evolved in a laboratory | Smart News