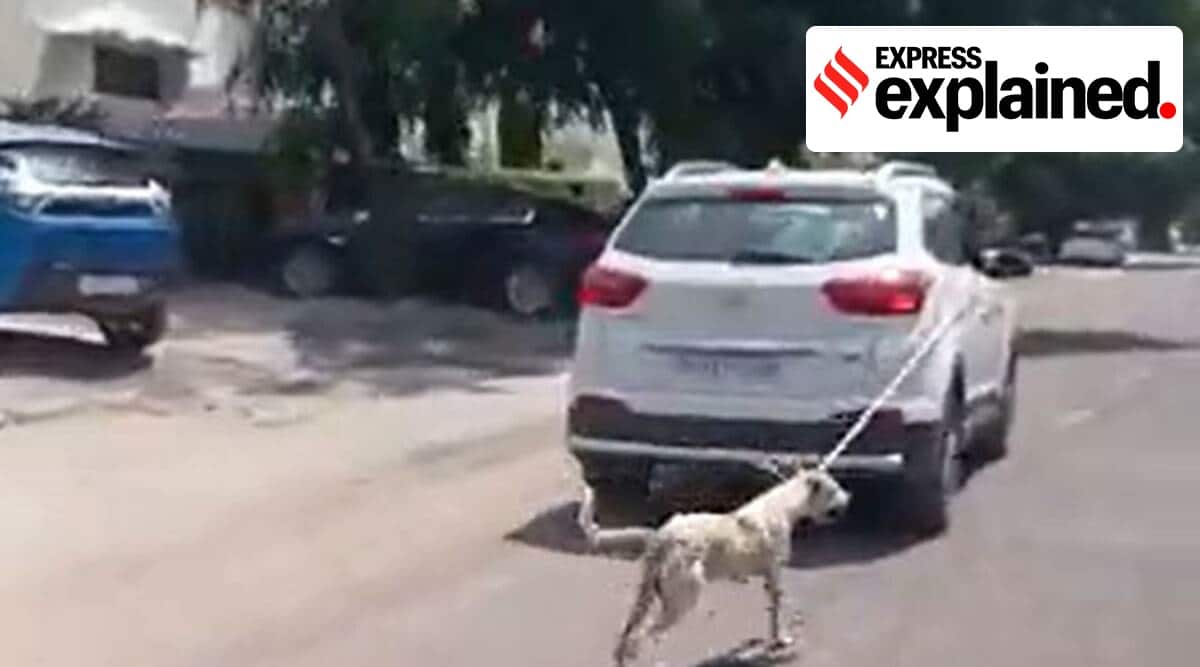 Last week, a doctor from Jodhpur in Rajasthan allegedly tied a dog to his car and dragged him through town. The dog has a fractured leg and suffered bruises. The doctor, Rajneesh Galwa, is facing charges under Section 428 (mischief by killing or maiming an animal) of the Indian Penal Code and Section 11 (cruel treatment of animals) of the Wildlife Act 1960. prevention of cruelty to animals (PCA).

If found guilty under the PCA Act and found guilty of a first offence, Dr. Galwa can be punished with a fine of Rs 10 to Rs 50. is not his first such crime in the last three years, the maximum penalty would be a fine between Rs 25 and Rs 100, a prison term of three months, or both.

Several cases of animal cruelty have come to light recently, and although they have caused outrage on social media, the penalty for offenders has not been reviewed since 1960. The Jodhpur case has once again highlighted the need for sentencing review, and the debate surrounding it.

What does the Prevention of Cruelty to Animals Act 1960 say?

The law defines cruelty to animals –– including acts of overburdening or overexerting animals, failing to provide food, water and shelter, mutilating or killing an animal, etc a fine which may not be less than ten rupees but which may go up to fifty rupees, and in the event of a repeat offense committed within three years of the preceding offence, a fine which may not be less than twenty- five rupees but up to one hundred rupees or with imprisonment up to three months, or both.

The law has been criticized for being “speciesist” (in very simple terms, the assumption that humans are a superior species deserving more rights), for its quantum of punishment being negligible, for not defining the “cruelty” of adequately and for inflicting a flat sentence without any gradation of the crimes.

Who requested amendments and on what grounds?

Along with animal welfare organizations, several politicians have called for a change in the law.

In 2014, the Supreme Court in ‘Animal Welfare Board of India vs A Nagaraja & Others’ said that “Parliament is expected to make an appropriate amendment to the PCA Act to provide an effective deterrent” and that “for violation of section 11, adequate sentences and penalties must be imposed”.

In 2021 Kendrapara MP Anubhav Mohanty also proposed a bill, expand the definition of cruelty to include events where “animals are subjected to cruelty either during sport or the activity itself”, and anyone who “skips, roasts or kills out of superstition or extracts parts of living animals by a procedure which causes pain and suffering, for the purpose of obtaining hides, oils or other animal products; dynamites streams, rivers or other bodies of water for the purpose of fishing or harming animals aquatic animals; or electrifies a fence, without the authority of the law, causing pain and suffering to animals.

In 2020, a group of MPs across party lines wrote to the then Livestock Minister, Giriraj Singh, urging that the penalty provided for in the 1960 Act be increased.

In April 2021, the Center proposed changes where the penalty is up to “Rs 75,000 per animal or three times the cost of the animal as determined by the jurisdictional veterinarian, whichever is greater, and a term of imprisonment of three years up to five years or two”.

In October 2021, the government announced that it would introduce legislation to amend the CPA Act. Union Livestock Minister Parshottam Rupala told PTI, “We are ready with the Amendment Bill. We are in the process of getting cabinet approval.

However, the law has not yet been amended.

How common are acts of atrocities against animals?

While the everyday acts of stoning or beating animals are widespread and commonplace, the crime sometimes takes on grotesque and perverse forms.

In April this year, four people were arrested for committing unnatural sexual acts on a monitor lizard in Maharashtra.

In July 2021, the High Court of Kerala took notice suo motu after a dog was beaten to death by three people at Adimalathura beach in Thiruvananthapuram.

In 2020, the death of a pregnant elephant who bit off a fruit filled with explosives sparked national outrage. In February of the same year, three men were arrested in Ludhiana for allegedly beating a stray dog ​​with iron bars, throwing it off a roof and then dragging it down the road tied to an auto-rickshaw.

So who is against the proposed changes in the CPA Act?

Some experts have pointed out that simply increasing the amount of punishment may not be enough to end cruelty to animals, and some already marginalized communities like the “Madaris” (who play with animals) and the ” saperas” (snake charmers) could be disproportionately affected.

Others have argued that focusing on the individual act of ‘cruelty’ – such as farmers putting up electric fences around their fields – is an incomplete approach, and action is needed to alleviate the larger problems of disappearance. animal habitats and climate change exacerbating humans. – animal conflict.