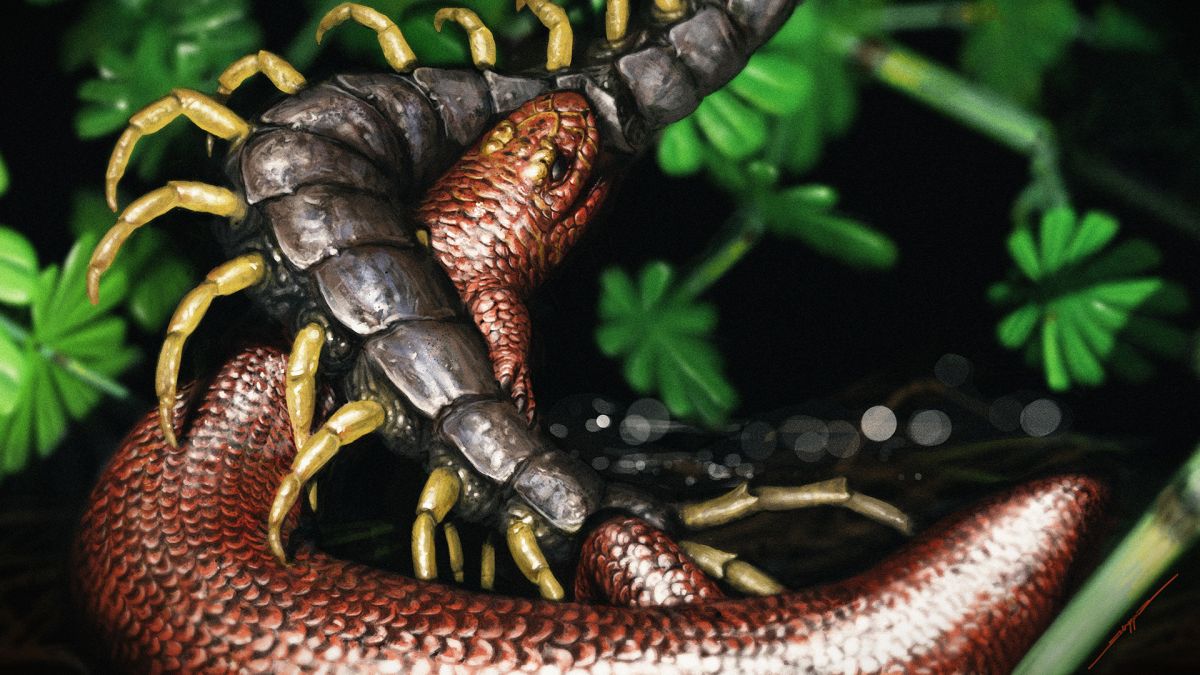 A long, curvy-bodied reptile that lived around 310 million years ago has been named after a legendary giant snake in Viking mythology that once fought Thor, the Norse god of thunder.

But while the Vikings‘the mythical “Serpent of the World”, named Jörmungandr, was large enough to wrap its body around the entire Earth, the ancient reptile Joërmungandr bolti (YOR’-mun-gund BOL’-tee) is only a few inches long.

This creature is a microsaur (“small lizard“), a first group of reptiles that were among the first vertebrates (vertebral column animals) to evolve on earth. J. bolti had a slender, elongated body with short limbs and a blunt skull, and the fossil was so well preserved that it retained specialized scale impressions that resemble dirt-repelling scales in modern reptiles. Together, these characteristics suggest the tiny microsaur dug an underground tunnel and slipped like a snake, researchers have reported in a new study.

Related: Wipe out: the most mysterious extinctions in history

The microsaur fossil was in the collection of the Field Museum in Chicago and came from Mazon Creek in Illinois, where deposits have preserved numerous fossils of complete or near-complete organisms dating from the Carboniferous period (about 359-299 million years ago). Microsaurs represent some of the oldest fossils of amniotes, vertebrates that develop embryos in fluid-filled eggs with multiple layers of membrane, according to the University of California Museum of Paleontology in Berkeley.

J. bolti (“bolti” is a nod to the late paleontologist John R. Bolt, Emeritus Curator of Amphibians and Fossil Reptiles at the Field Museum) is a microsaur from a group called Recumbirostra, which has existed for about 40 to 50 million years, “from the mid-Carboniferous to early Permian [299 million to 251 million years ago]”said lead author of the study, Arjan Mann, postdoctoral researcher in paleobiology at the Smithsonian National Museum of Natural History in Washington, DC.

Mann conducted research on microsaurs while pursuing a doctorate in the Department of Earth Sciences at Carleton University in Ottawa, Canada. He had previously described two species of microsaurs, naming the genera Devilish (“devil digger”) and Infernovenator (“Hell hunter”), according to a statement 2019.

Mann told Live Science that most of the fossils in this group of microsaurs come from the Permian, so J. bolti gave scientists a rare glimpse of an ancient microsaur. Its body, which measured only 1.9 inches (5 centimeters) from nose to tip of tail, was “streamlined, cylindrical, and relatively smooth,” with stocky limbs and tapered tailbones that hinted at its short tail. and rounded, “similar to the morphology of the tails of some modern geckos and skinks, which use their tails to store fat,” the study authors wrote.

Oval, ridged scales covered the body, and the sturdy skull had fused bones, which could help the microsaur withstand the pressures of digging, Mann said.

“We think it was something like a head-first burrower; the head would dig into the ground to dig holes like modern reptiles do,” Mann said. J. Bolti ‘its elongated shape would have allowed the microsaur to squirm and twist on the ground like a snake, and “its scales seem to have patterns similar to what we see in modern burrowers.” [digging] reptile scales, which may have been used to get rid of dirt. “

If microsaurs are indeed early amniotes, J. boltiThe snake-like shape of (and the elongated body shapes of other microsaurs) offer a new perspective on how quickly animal bodies diversified once they crawled on land from the ocean. Most of the early amniotes look like small lizards, and the current interpretation of the fossil record suggests that the transition to more diverse forms has been slow. However, J. bolti and other long-bodied microsaurs suggest otherwise, Mann said.

“This means that the evolution of amniotes was explosive radiation, where as soon as they are on earth, they diversify into all of these different body forms,” Mann said. “It’s a very different narrative than what we think now. We might have had almost comparable diversity to what we’re seeing today, very quickly.”

The results were published on July 21 in the journal Royal Society Open Science.