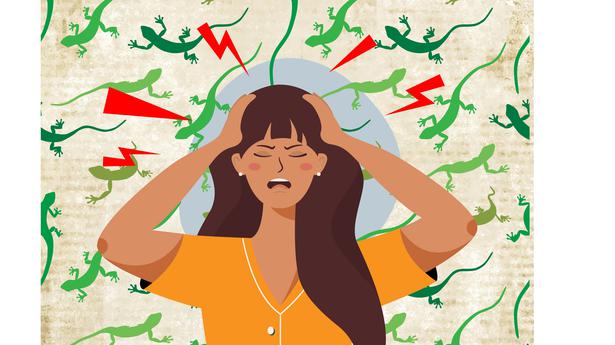 Satire | You can’t win against a reptile

“We moved to my in-laws for the night. I could imagine the lizards in our living room giving each other high-fives as we trotted along’

“We moved to my in-laws for the night. I could imagine the lizards in our living room giving each other high-fives as we trotted along’

I know I said “to be continued” at the end of my previous column. But tomorrow is Independence Day, and I feel patriotically compelled to tell you about things like freedom, independence, and how India threw away the yolk of colonialism (my grandfather gave up eggs altogether) . Besides, I don’t want to talk about lizards again. The very subject makes me feel uneasy and depressed. If I should feel uncomfortable and depressed anyway, I might as well talk about the state of the nation, our economy, politics, justice, electoral ties, collapsing institutions, etc. . Well, wait, that’s actually more depressing. Let’s stick with the lizards.

Where were we? Yes, the Nomo-Liza electronic lizard repellent. It kept me awake at night and the lizards loved it. So I ordered the spray, Poda-Saniyan. The friend who recommended it told me it was the lizard equivalent of the chemical weapons Assad used in Syria, only better — it was eco-friendly because it was plant-based.

I checked the label for usage instructions. It said, “Spray on surfaces where lizards roam. Poda-Saniyan will not kill the lizards but repel them”. Not being a lizard myself, I didn’t know the kind of places they like to hang out. After consulting Google, I sprayed Poda-Saniyan at all entry and exit points of the house. I also sprayed it behind the bookcase, on the windowsill, under the sink, behind the shoe rack.

That night I came home from work and was about to ring the doorbell when it hit me – the smell. It was the kind of rancidity you get when you mix rotten eggs with eucalyptus oil, add a cup of freshly produced cow dung, and boil the mixture in a tub of mouthwash.

This chronicle is a satirical vision of life and society

No effect on lizards


The woman opened the door with a mask.

“It’s the lizard repellent,” I said. “I sprayed a little here and there before I left for work.”

“A little? Or did you empty an entire cistern of it?”

“Just a few drops,” I say. “We humans are so much bigger than a lizard. If we find its scent so irresistible, imagine its effect on lizards!

“I have some people from work coming tomorrow,” his wife said, her eyes scanning the door for intruders.

“Relax,” I said. “Google says the smell goes away in 24 hours unless you spray it again.”

The next day, coming home from work, I smelled Poda-Saniyan in the parking lot. Had the whole Society, inspired by me, begun to use it? If so, they better recognize my contribution at the next general meeting.

As I walked up the stairs and reached our apartment, the smell was like a wall that I had to knock down and walk through. The woman opened the door holding a handkerchief to her nose, which was already under two masks. But even through three layers of face pads, I could feel his fury. She had considered canceling it but moved it to a restaurant – a decision which had caused her considerable stress as she had to solve a complicated logistical puzzle under time pressure so that all of her guests could make it despite the Last minute location change.


I raised my hands like Al Pacino. “I didn’t spray after yesterday, I swear not.”

“I know,” she snapped. “But that horrible spray was your idea!”

“But how come the smell is stronger today than yesterday?”

The woman sighed. I knew then that it was Kattabomman. He was fascinated by Poda-Saniyan. I remembered his excitement as he followed me, pointing to lizard hiding places, as I went from room to room with the spray. Apparently, late in the afternoon, while his mother was away and his nanny was sleeping, he had spotted a lizard under the couch. And like a mundhiri kottai, he had picked up Poda-Saniyan and followed the lizard into the house, brandishing the spray like an AK-47. He kept “firing” until the 500ml canister ran out of ammunition.

“Has the lizard left the house? I asked.

Kate shook her head. “He ran into the bedroom. He climbed onto the bed.

“Don’t tell me you sprayed the bed?”

Katta’s face – juxtaposed with Wife’s expression – said it all.

“What?! You’re leaving me because I bought lizard repellent?”

“I’m spending the night at Dad’s,” she said. “You bring Katta with you.”

We moved to my in-laws for the night. I could imagine the lizards in our living room slapping each other’s hands as we drove. They now had the whole house to themselves. Moral of the story: you can’t win against a reptile.

The author of this satire, is social affairs editor, The Hindu.