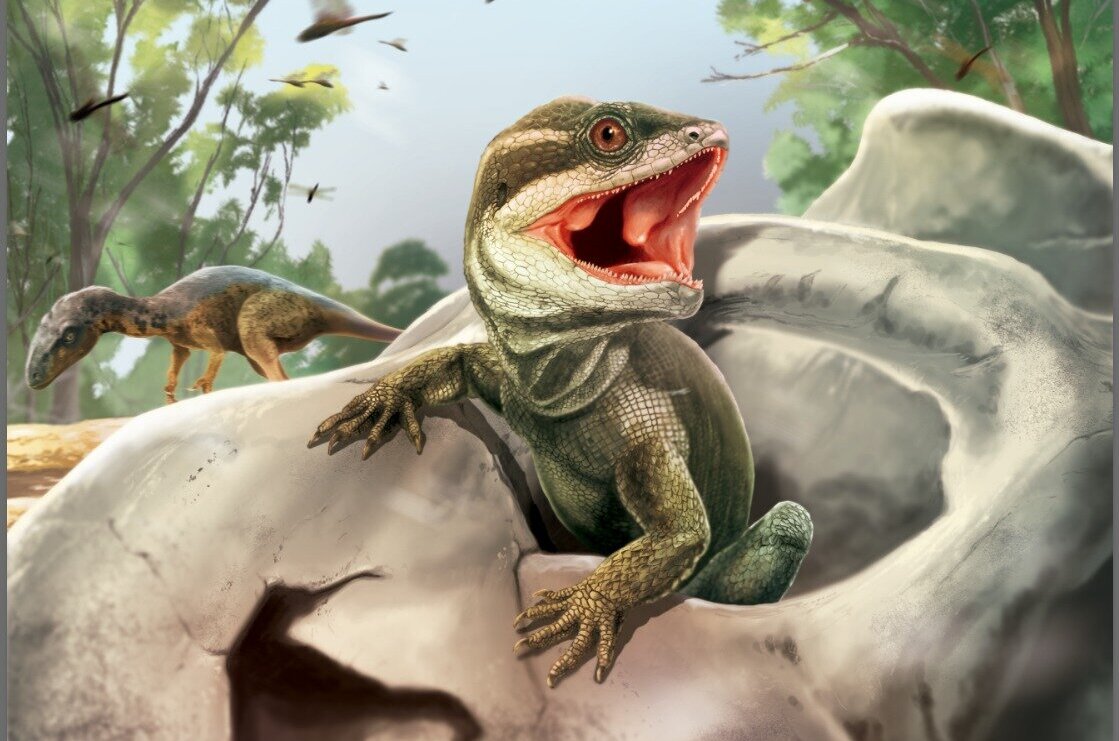 Lizards and snakes are a key part of most terrestrial ecosystems on the planet today. Along with the charismatic New Zealand tuatara (a “living fossil” represented by a single living species), the squamates (all lizards and snakes) make up the Lepidosauria, the largest group of terrestrial vertebrates on the planet with around 11,000 species, and by far the largest modern group of reptiles. Both squamates and tuataras have extremely long evolutionary histories. Their lineages are older than dinosaurs, having originated and diverging from each other around 260 million years ago. However, the first phase of the evolution of Lepidosaurs, 260 to 150 million years ago, is marked by highly fragmented fossils that do not provide much useful data to understand their early evolution, leaving the origins of this group of very diverse animals in mystery for decades.

In a study published Aug. 25 in Nature an international team of researchers describes a new species which represents the most primitive member of the Lepidosaurus, Taytalura alcoberi, found in Upper Triassic deposits in Argentina. Discovered by the main author, Dr Ricardo N. Martínez, Universidad Nacional de San Juan, Argentina, and curator at the Instituto y Museo de Ciencias Naturales, Taytalura is the first ancient lepidosaur fossil preserved in three dimensions. This has allowed scientists to deduce with great confidence its location in the evolutionary reptile tree and helps bridge the gap in our knowledge of the origin and early evolution of Lepidosaurs.

Martínez and his co-author, Dr Sebastián Apesteguía, Universidad Maimónides, Buenos Aires, Argentina, performed high-resolution CT scans of Taytalura which confirmed that it was something related to the ancient lizards. They then contacted co-author Dr Tiago R. Simões, a postdoctoral fellow in the Department of Organic and Evolutionary Biology at Harvard University, to help them identify and analyze the fossil. Simões specializes in the study of these creatures and in 2018 published the largest dataset in existence to understand the evolution of major groups of reptiles (living and extinct) in Nature.

“I knew the age and locality of the fossil and could tell by looking at some of its external features that it was closely related to lizards, but it looked more primitive than a real lizard and that is something quite special, ”said Simões.

The researchers then contacted co-author Dr Gabriela Sobral, Department of Paleontology, Staatliches Museum für Naturkunde Stuttgart, Germany, to process the CT data. Sobral, a CT data processor, created a mosaic of colors for each bone in the skull, allowing the team to understand the fossil’s anatomy in highly detailed resolution at a scale of just a few micrometers, or roughly the same thickness as a human hair. .

With the data from Sobral, Simões was able to apply an evolutionary Bayesian analysis to determine the correct placement of the fossil in the reptile dataset. Simões had recently applied the Bayesian method – which was adapted from methods originally developed in epidemiology to study how viruses like COVID-19 evolve – to accurately estimate the time and rates of anatomical evolution during ascent. tetrapods. The statistical analysis confirmed their suspicions that Taytalura was in fact the most primitive member of the line that eventually gave birth to all lizards and snakes. “It’s not even a lizard in the evolutionary tree,” Simões said, “but it’s the next thing over there, between the real lizards and tuataras, and all the other reptiles.”

“This beautifully preserved 3D fossil is truly an important find. It is the most complete fossil representing the early stages of Lepidosaur evolution that we have so far. All other known fossils are too incomplete, which is why makes it difficult to classify them for sure, but the comprehensive and articulate nature of Taytalura makes her relationships much more secure, ”Sobral said.

Simões agreed, “Taytalura is a major point in the reptile tree of life that was previously missing. Because these fossils are so small that they are very difficult to keep in the fossil record. And the candidate fossils that we have are very fragmented and poorly preserved, so they don’t provide as much useful data for analysis. “

Taytalura The skull reveals that the early Lepidosaurus looked much more like the tuataras than the squamates, and therefore, that the squamates represent a major deviation from this ancestral pattern. In addition, it has a unique dentition, different from the teeth found in any group of living or extinct Lepidosaurs. “What our analyzes tell us, besides some other anatomical features that we could see there, in the skull in particular, is that this type of sphenodontian body, at least for the skull, is the ancestral model of the lepidoosaurs. ancestral pattern seems to be more similar to tuataras, ”said Simões.

“Taytalura retains a composition of characteristics that we did not expect to find in such an ancient fossil. For example, it shows some features that we thought were exclusive to the tuatara group. On the other hand, it has made us wonder how certain characteristics of lizards really are “primitive”, and it will cause scientists to reconsider several points of the evolution of this group, “said Sobral.

“The almost perfectly preserved Taytalura The skull shows us the details of the origin of a very successful group of animals, comprising over 10,000 species of snakes, lizards and tuataras, “Martínez said.” But it also highlights the importance paleontological site of the Ischigualasto Formation paleontological site, known to preserve some of the most primitive dinosaurs known in the world. The extraordinary quality of the fossil record at this site has allowed something as fragile and tiny as this specimen to be preserved for 231 million years. “

“Unlike almost all Triassic Lepidosaur fossils found in Europe, this is the first primitive Lepidosaur found in South America, suggesting that Lepidosaurs may have migrated through very remote geographic regions early in their history. scalable, ”Simões agreed.

“We are used to accepting that the Mesozoic era was a time of gigantic reptiles, huge proto-mammals and huge trees, and so we commonly look for fossils that are visible at human height just by walking,” he said. declared Apesteguía. “However, most of the components of the ancient ecosystem were small, as they are today. There was a universe of fauna slipping through larger paws, claws, or hooves. Taytalura teaches us that we were missing important information by not only looking for larger animals, but also by believing that the origin of the lizards only occurred in the northern hemisphere, as the evidence seemed to confirm so far. “

While Taytalura is primitive, it is not the oldest Lepidosaurus. The fossil is 231 million years old, but there are also fossils of real lizards dating from 11 million years earlier. The team plans to then explore older sites in hopes of finding similar or different species of the same lineage that branch out just before the origin of true lizards.