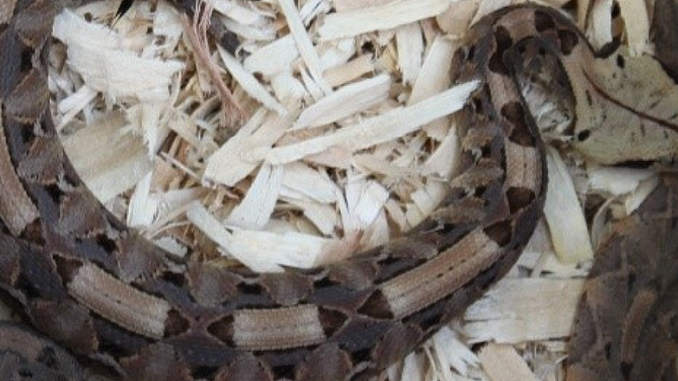 A federal judge in Valdosta sentenced Ashtyn Michael Rance, 35, to 33 months in prison on each count to run concurrently, a $4,300 fine and three years of post-release supervision. The judge also prohibited Rance from owning or selling wildlife during the watch period. Rance pleaded guilty on November 18, 2021 to violations of the Lacey Act and unlawful possession of firearms.

In pleading guilty, Rance admitted that on May 10, 2018, he shipped 15 Gaboon vipers from Valdosta to Florida. The snakes were worth around $900 and were destined for a buyer in China. He falsely labeled the package as containing harmless reptiles and ball pythons.

Rance had legally imported 100 Gaboon vipers and other venomous snakes from Africa to Atlanta. He received a special permit to transport the snakes out of Georgia, but then returned to Valdosta with 16 of the vipers.

Justice Department authorities said they intercepted the package containing the vipers “to minimize the risk of being bitten or escaping.”

Gaboon viper, Bitis gabonica, is native to central sub-Saharan Africa, from Congo to South Africa and from Ghana to Tanzania. Its venom can cause shock, unconsciousness or death in humans.

It is the largest member of the genus Bitis, and it has the longest fangs of any poisonous snake – up to two inches (5 cm) in length – and the highest venom yield of any snake.

Additionally, in pleading guilty, Rance admitted that on February 22, 2018, he shipped three Eastern Box Turtles and 16 Spotted Turtles from Valdosta to a customer in Florida, in a package falsely labeled as containing tropical fish and common lizards. He was paid $3,300 for the turtles and knew they were then trafficked to China.

spotted turtle, Clemmys guttata, is a semi-aquatic turtle native to the eastern United States and the Great Lakes region. The eastern box turtle, terrapene carolina carolina, is endemic to forested regions of the East Coast and Midwest. Collectors enjoy both species in the domestic and overseas pet trade market, where they are resold for thousands of dollars.

Rance owned and sold the reptiles in violation of Georgian laws. The federal Lacey Act is the nation’s oldest wildlife trafficking law and prohibits the transportation of wildlife in interstate commerce if the wildlife is illegal under state laws. It is also a violation of the Lacey Law to falsely label a package containing wild animals.

Additionally, Rance admitted to possessing a Bushmaster Carbine .223 caliber rifle and a Mossberg 12 gauge shotgun at his Valdosta residence which he, as a convicted felon, was prohibited from possessing.

The U.S. Fish and Wildlife Service Law Enforcement Office in Vero Beach, Florida, the Federal Department of Alcohol, Tobacco, and Firearms and the Georgia Department of Natural Resources led the investigation. as part of the Southern Surge Task Force’s Operation Middleman. The operation concerned the trafficking of reptiles from the United States to China.

The featured image: A Gaboon viper that Rance had packed for shipment. These deadly snakes have the longest fangs in the world. (Photo courtesy of the United States Department of Justice)