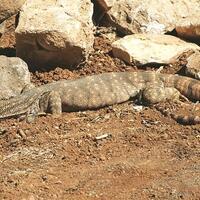 Rare and Huge Species of Lizards Found Alive in Şanlıurfa

A desert monitor lizard, which is a species of monitor lizards and in danger of extinction, was found in the southeastern province of Şanlıurfa.

The desert monitor lizard (varanus griseus), known as the huge lizard, was seen on the Turkey-Syria border as part of a project called “Reptile Species Detection”, initiated by the Scientific Research Commission of Harran University and Scientific and Technological Research Council of Turkey (TUBITAK).

Harran University Biology Department Associate Zülfü Yıldız said after five days of observing the land, they saw the animal sunbathing in an area near Syria.

He said the huge lizard was very shy and harmless, adding: “The animal ran away as soon as it saw us. But with some techniques we captured it and took its pictures. We will record some of its characteristics and then bring them back to nature.

Yıldız said the desert monitor is a rare and special species.

“He had not been seen between 1960 and 2002. In 2002, we found the remains of one killed by villagers. Last year we had two samples killed by villagers in Şanlıurfa and Şırnak. It is a rare animal and in danger of extinction. It’s hard to find and observe,” he said.

The desert monitor lives throughout North Africa and South Asia.