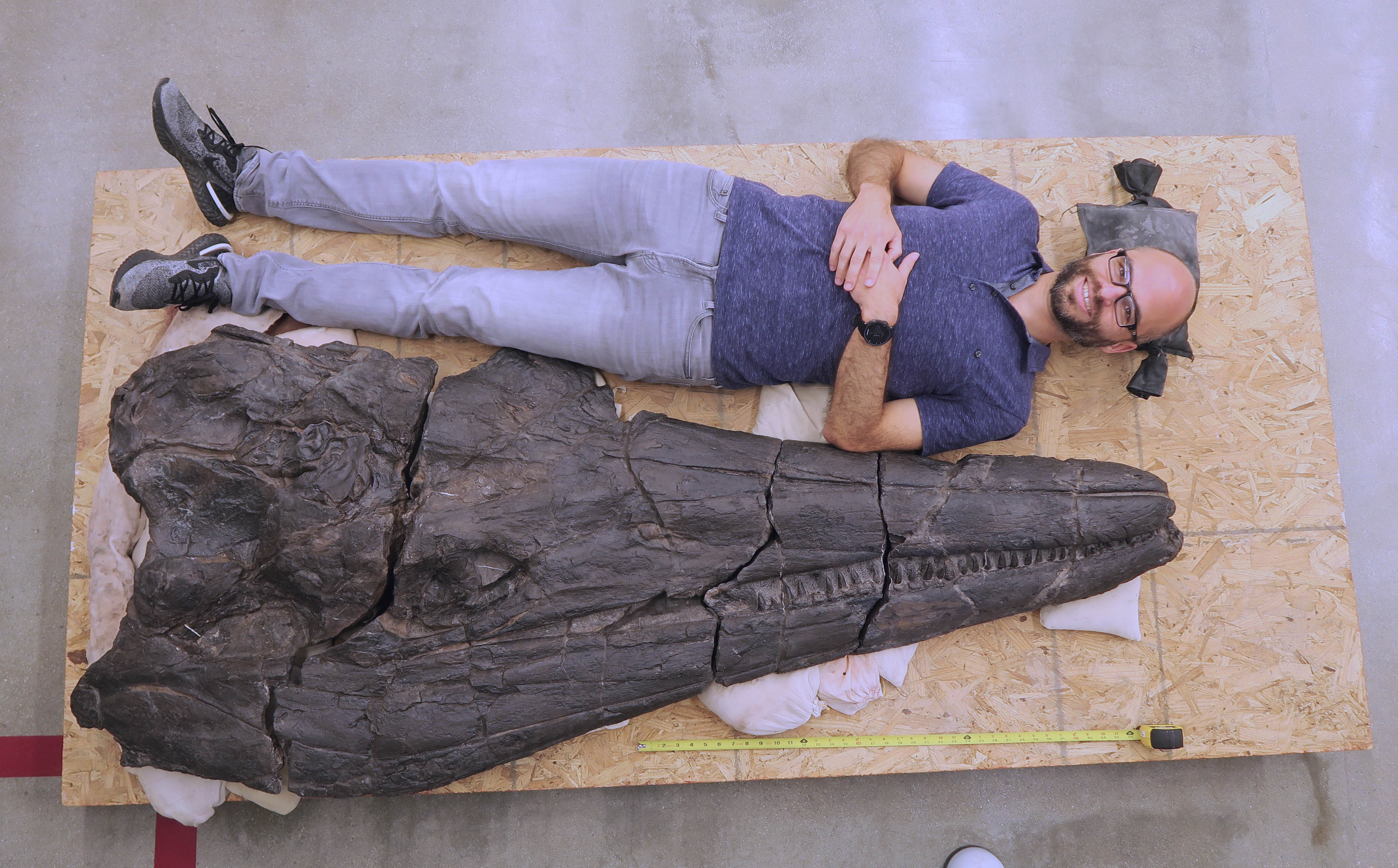 Deep in desert Fossil Hill, Nevada, Lars Schmitz was part of a team that discovered a gigantic new species of marine ichthyosaur – a group of fish-shaped marine reptiles — from the beginning of the Triassic, about 220 to 250 million years ago.

Schmitz, Assistant Professor biology at the scientific department WM Keck, has been involved in the excavation process of this giant since 2003.

In 2015the fossil was eventually “airlifted off the mountain with helicopters…and brought to Los Angeles in a beer truck,” Schmitz told TSL.

This phase of the project was funded by the WM Keck Science Center, Schmitz’s alma mater, the University of Bonn and the Great Basin Brewery. The fossil is currently on display at the Los Angeles County Museum of Natural History.

A paper co-authored by Schmitz was published in December, describing the findings related to the ichthyosaur.

Weighing 45 tons, with a skull six and a half feet long and a body 55 feet long, the rapid development of gigantism in this species is strikingly different from the modern giants of our oceans, such as whales, Schmitz says.

In one interview with the New York TimesSchmitz said the research team had only one question after discovering the fossil: “How did it get so big?” While modern whales took about 45 million years to grow to massive size, this ichthyosaur did so in three million.

Schmitz hypothesizes that the rapid development of large size in ichthyosaurs is partly the result of the short food webs caused by the Permian extinction. He explains that shorter food chains are better at supporting apex predators.

Additionally, Schmitz said, research on the giant ichthyosaur can benefit modern marine conservation by providing a deeper understanding of marine evolution, especially since the massive creature evolved rapidly after a mass extinction.

“So when we look at the conservation of modern giants, changes to the food web can have massive consequences for the overall health of the ecosystem,” Schmitz said.

He hopes that research can contribute to efforts to stabilize the effects of climate change on wildlife. Schmitz puts a positive spin on the mass extinction events by pointing out that “life bounced back every time.”

“We are currently causing massive climate change. If we let it return to a steady, stable state, it should bounce back over geologic time,” Schmitz said.

Schmitz refers to C.youngorum as a “lizardfish” – the one that dominated the oceans of the Triassic era after the mass extinction at the end of the Permian era.

Schmitz also received press coverage in 2021 for his role in analyzing a much smaller creature – Shuvuuia deserted – which were only two feet long. S. deserti were theropods (three-toed, bipedal carnivores) that lived about 75–81 million years ago during the Late Cretaceous in present-day Mongolia.

the study, which was published in May and co-authored by Schmitz, was the first time extreme specializations for hearing and vision were documented in a fossil. According to a co-author article, the team’s findings describe the “most compelling evidence yet for nocturnal dinosaurs.” By studying the sensory abilities of these dinosaurs, they said, scientists can learn more about nocturnal animals.

by Schmitz Laboratory based in Keck is currently working closely with the Los Angeles County Museum of Natural History to continue to conduct comparative morphology research.

“My long-term goal is to help [with] facilitating the synthesis of phylogenetic comparative biology and quantitative paleobiology”, website said. “A unification of these two distinct disciplines should reconcile many of the conflicting findings and lead to a better understanding of evolutionary patterns and processes.”

Have You Seen This Puppy Stolen From A Durham Animal Shelter?

A Guide to Animal Locations – GameSpew