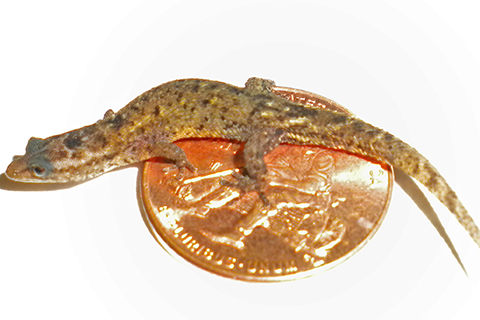 Until this week, there were six previously recognized species of geckolettes (or dwarf geckos, genus Spherodactyl), endemic to Puerto Rico. However, this number has just been updated.

The West Indies are a unique living evolutionary laboratory where islands are positioned next to each other, allowing species to move from island to island. Yet these islands are also isolated enough to produce and support endemic animals and plants. Species diversity on the Caribbean islands is primarily the result of colonization events by dispersal over water followed by isolation and adaptation to local island conditions.

This is the case with the geckolettes of the Caribbean, Central America and South America. These lizards are tiny (20–35mm) and hard to see – normally hiding in leaf litter, under rocks, logs or even trash. They have significant advantages over other potential settlers that have enabled them to become pioneers in new lands; for example, they have eggs that are resistant to the effects of dehydration and temporary immersion in seawater.

Geckolettes diversified after the initial colonization of the West Indies during the low sea level period of the early Oligocene (38–22 million years ago), which meant increased connectivity of islands with the ‘South America. Today, almost every island is thought to have developed a specific group of geckolettes which gradually inhabited the dry forests.

For some time, scientists suspected that the number of species described in Puerto Rico was incomplete, but did not have sufficient tools to revise it. However, with recent advances in DNA sequencing and bioinformatics analysis, it has become possible to see beyond the obvious. Researchers have figured out how to use molecular sequence data to determine how and when animals arrived in their current habitats, when different species originated, and what migration routes they took to cross the sea from island to island.

In their first paper almost 10 years ago, Díaz-Lameiro and Oleksyk used mitochondrial DNA sequences to reconstruct the evolutionary history of the colonization of Puerto Rico and the small islands of Mona, Monito and Desecheo in the west, in the Mona Passage which connects the Atlantic to the Caribbean Sea. While Mona and Monito are directly adjacent to each other, they have two different species of geckolettes. Desecheo Island is 30 miles from Mona and Mona is 40 miles from the main island of Puerto Rico. It turns out that the Desecheo gecko (S. levinsi) is most closely related to the Mona gecko (S. monensis) then they were to the other six species. This supported the hypothesis that these species dispersed over water in the direction of sea currents.

When Díaz-Lameiro and Oleksyk, along with other co-authors, wrote a paper in 2013 examining molecular sequence data, they also reported the existence of a distinct geckolette lineage from the karst areas of northwestern Puerto Rico. . The sequences of these animals, collected in the municipality of Rincón, consistently formed an exclusive evolutionary lineage and were morphologically distinct from other described species. Later, another article reported a similar result but from the northern part of the island, towards Bosque Estatal de Rio Abajo. It was molecular proof of the existence of new species of lizards never discovered before.

However, to formally recognize a new species, a special report had to be published that would reconcile all previous knowledge, combine morphological and genetic data to demonstrate differences with other species, and officially announce a new species. The new paper, published in Ichthyology and Herpetology, is the first description of a new species of Puerto Rican geckolet in nearly a century, highlighting the need to study biological diversity even in well-studied areas.

“We live in extraordinary times,” Oleksyk said. “Many living species around us are rapidly disappearing, sometimes even before being discovered and described. When they leave, we lose a piece of the puzzle which is life on Earth. Every time a species goes extinct, the world around us crumbles, and there’s no way to recover what’s lost, or understand what happened. That’s why we need to document the diversity of life as much as possible, before another species has perished. The more species we know, the better we can understand how to sustain the wonderful diversity of life on our planet.

The common name of this new species, the karst gecko — latin nameSphaerodactylus verdeluzicola — is a dedication to an old Puerto Rican song, “Verde Luz”, written by Antonio Cabán Vale de Moca in western Puerto Rico. Additionally, Rincón Beach, where the species was first discovered, is a famous spot to watch the final “green flash” of a beautiful sunset over the waters of Mona Passage. This optical phenomenon occurs at dusk as the sun dips below the horizon above the water, and light is scattered through the Earth’s atmosphere like a prism, causing a sudden change to bright green. It is said that once you have seen a “green flash” you will never be wrong in matters of heart again.

“Most Puerto Ricans not only know the song, but can sing the lyrics by heart,” Diaz-Lameiro said. “It is commonly used in commercials, baseball games and public events. It is also taught in schools, and some consider it a second national anthem.

The first verse of the song describes the natural wonders of the island, which correlate with the habitat of the gecko. Beginning and ending with the phrase ‘Green luz de monte y mar‘ (Mountains and Sea Green Light), which poetically refers to the beauty of the mountains and sea in Puerto Rico. The name is meant to be allegorical in reference to the places where the geckolette was found: hidden in the thick litter, found only on a beach in Rincon, and the karst mountains of Rio Abajo.