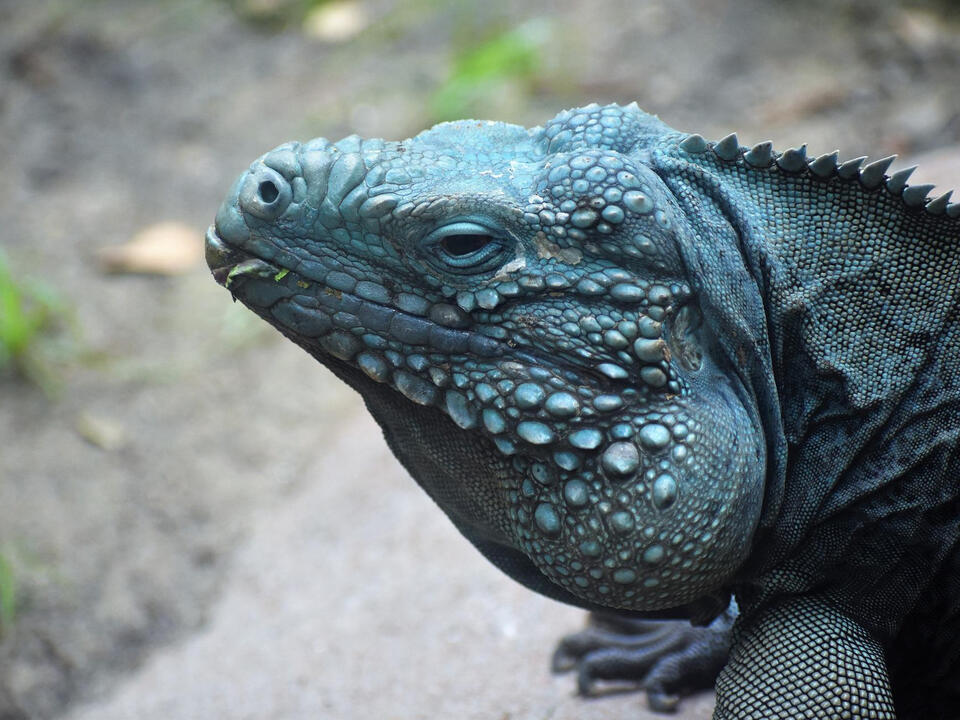 “Igor sits on a rock, soaking up a ray of sunlight streaming through a skylight above his enclosure at the ABQ BioPark Zoo – the scales covering his plump body taking on an iridescent bluish hue. He is one of three blue iguanas at the zoo and part of an endangered species of lizard native to the Caribbean island of Grand Cayman that nearly became extinct.” —Rick Nathanson

Fortunately, Igor and his friends are well taken care of, and the Albuquerque BioPark Zoo intends to increase the number of blue iguanas.

“Igor’s habitat is meant to mimic his natural environment. ‘We have overhead misters here to provide humidity and keep it more like their natural environment,’ says Phil Mayhew, one of the four reptile keepers zoo and Igor’s main caregiver.” —Rick Nathanson

Phil is quite dedicated: he just got back from a trip to the Cayman Islands to learn more about the blue iguana!

“Among the largest lizard species in the Western Hemisphere, a mature male blue iguana can be 5 feet long from the tip of the nose to the tip of the tail and weigh 20 to 25 pounds. Females are somewhat smaller Nine-year-old Igor is a bit smaller, tipping the scales at around 9 pounds. He was paired with 12-year-old Lola, who recently laid 14 eggs but broke three in the nest.” —Rick Nathanson

The other 11 were placed in an incubator, but, according to Mayhew, no one knows if there are any embryos growing inside.

“There’s a chance these eggs are infertile.” —Phil Mayhew

I’m glad the Albuquerque BioPark Zoo is doing everything it can to increase the number of blue iguanas on the planet. This world most definitely needs fewer endangered species, and Igor seems to be quite content with how things sound.

Species of amphibians and reptiles threatened by drought years