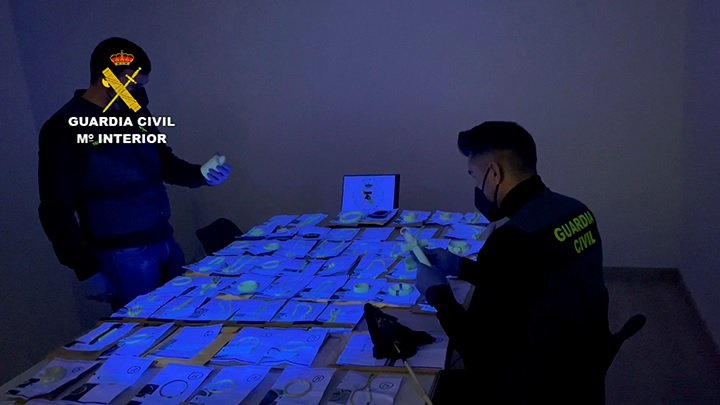 The Guardia Civil has arrested nine people involved in the sale of protected species, all covered by the international CITES agreement. The individuals were all arrested for animal abuse and cash trafficking.

Officers were able to rescue animals sent in parcels and confiscate more than 100 ivory items and numerous snake and lizard skins. All items were for illegal sale locally.

The nine who were under investigation are from Álava, Guipúzcoa, Vizcaya and the Autonomous Community of Cantabria.

What species were sold?

According to SEPRONA agents, the gang was selling elaborate pieces of ivory and python skins on the internet. The public prosecutor’s office in collaboration with DHL parcels intercepted parcels containing lizards and even a royal python. Animals were sent in shoeboxes, with most arriving dehydrated, injured and sometimes dead. None of the packages met the standards required for the transport of animals.

All recovered animals were sent to Karpin Abentura Recovery Center.

Specimens of the African elephant (Loxodonta africana) and its parts, as well as products of this species, and those from snakes such as those found (Phitonidae), are included in Appendices I and II of the Convention on international trade in endangered species of wild fauna and flora, CITES, (Washington, March 3, 1973) and Annex A of Council Regulation (EC) No. 338/97 of December 9, 1996 on the protection of species of wild fauna and flora through trade and marketing thereof is prohibited .

Illegal trafficking and poaching of wildlife is one of the biggest threats to biodiversity in the world. The European Union has approved the European Action Plan to combat illegal trafficking and international poaching of these wild species, adapted in Spain to apply the appropriate measures (PLAN TIFIES), in response to the call made by the UN to combat this problem. This has been a major challenge in the field of nature conservation around the world, which aims to help put an end to this type of illegal activity.

The Civil Guard warns that the protection of fauna species listed in the CITES (International Convention on Wildlife Trafficking) appendices affects any living or dead specimen, as well as its parts or products. If the origin of the specimens is not known at the time of acquisition, or of the pieces that may have undergone any type of transformation, we must take into account that they could have the highest possible degree of protection. For this reason, it is noted that acts of possession, advertisement, trade or destruction of protected wildlife species must be documented regularly. Likewise, it is recalled that the shipment of live animals must be carried out by certified companies, providing the mandatory documentation that must accompany the animal (health card, CITES certificate, health guide or any other document proving its legal origin) .

The survey is part of the Spanish Action Plan against Illegal Trafficking and International Poaching of Wildlife (Plan TIFIES) and the LIFE GUARDIANES DE LA NATURALEZA project.

The nine people arrested will appear in court this week, charged under the Protected Species Act and with animal abuse.

Thanks for taking the time to read this article, don’t forget to come back and check the Euro Weekly News website for all your up to date local and international news and remember, you can also follow us on Facebook and instagram.