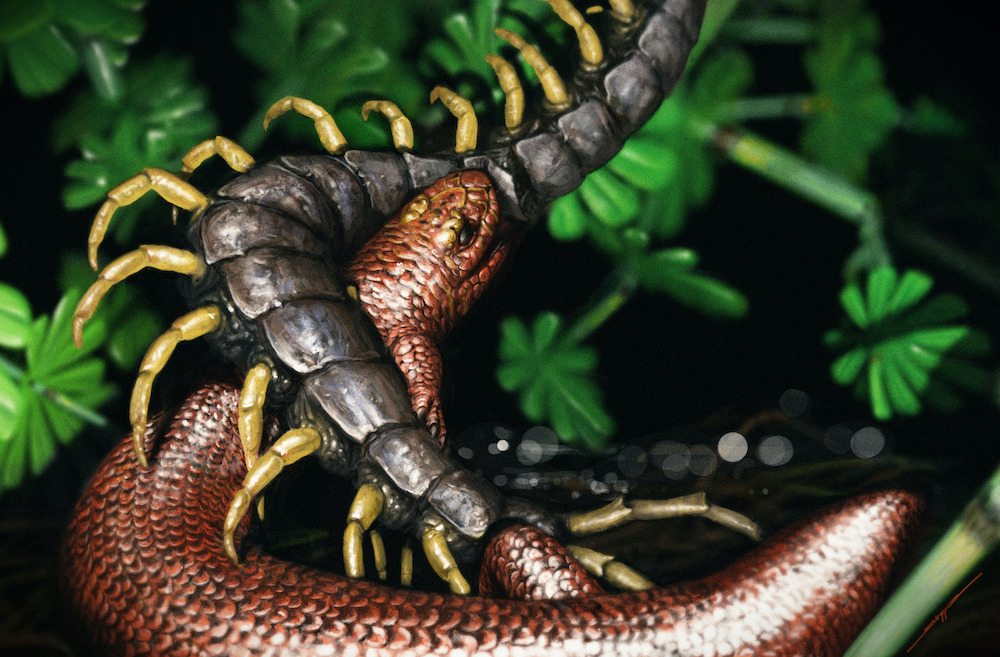 The recently discovered fossil of an animal that walked both above and possibly under the Earth has been named after a sea serpent which, according to Norse mythology, will invoke the end of the world and the rebirth that it brings. result.

This is an appropriate title given that Joërmungandr bolti arrived at the dawn of the reptile’s evolution. “If you saw this thing in real life, you’d say it’s a reptile,” says Arjan Mann, paleontologist and postdoctoral fellow at the Smithsonian National Museum of Natural History. Mann led the to study published in July in Royal Society Open Science who analyzed the ancient little animal.

The fossil was discovered in the Mazon Creek fossil fields in Illinois by a collector who later donated it to the Chicago Field Museum of Natural History. While working on his doctorate at Carleton University in Ottawa, Canada, Mann encountered the fossil while examining the collections of the Field Museum. Now he and his colleagues at Carleton University are the first to engrave it in the evolutionary archives.

The Mazon Creek fossil bed formed around 307 to 309 million years ago during the Carboniferous Period, when some of the earliest known land animals first appeared in the fossil record. While amphibians were previously semi-terrestrial, they still had to return to the water to lay their eggs. The group of animals always reproduces in the same way.

And while people have found fossils at Mazon Creek for over a century, most of those traces come from insects or fish – tetrapods like J. bolti are much rarer. When these proto-reptiles went extinct, the Mazon Creek area was likely mangrove forest, Mann says.

Jörmungandr bolti was about 2-3 inches long with small legs and about 40 vertebrae in his spine. It may have looked similar to today’s snakes and longer lizards like skinks. J. bolti had scales and, although it is not clear whether they are made up of keratin like all modern reptiles, they appear to be smooth and thin. The scales were probably similar to those of reptiles which use them to get rid of dirt as they spend at least part of their life underground.

The shape of the head also resembles that of snakes and lizards that spend part of their lives there and dig with their heads. “These groups of animals could be the first reptiles suitable for burying,” Mann explains.

The newly described creature may have belonged to a group called microsaurs, which were among the most abundant creatures in the Carboniferous and the Lower Permian that followed. J. Bolti Now complicates the debate over whether microsaurs were amniotes, an ancestral clade of reptiles that separated from amphibians, or a type of proto-reptile just outside the amniote group. “If it’s reptiles, it really increases the diversity of early reptile fossils,” he says.

While the name bolt hailing from paleontologist John R. Bolt of the Field Museum, Mann also nicknamed the new creature after the infamous Jörmungandr. This mythological sea serpent unleashes the death of the world when it nibbles the tip of its own tail. Eventually, a new world emerges after the old one is submerged in water. Mann says he chose the name because J. bolti was part of a wave of life that has evolved to diversify various niches on earth.

By this time, the rainforests had started to separate and some sections became more arid – conditions favoring animals that did not depend on water, like the amphibians and fish that once ruled the world. “These ecosystems were becoming unstable,” Mann says. “It was really this period that allowed Amniotes to become the most dominant colonizing things on earth.”

A new species discovered in Germany