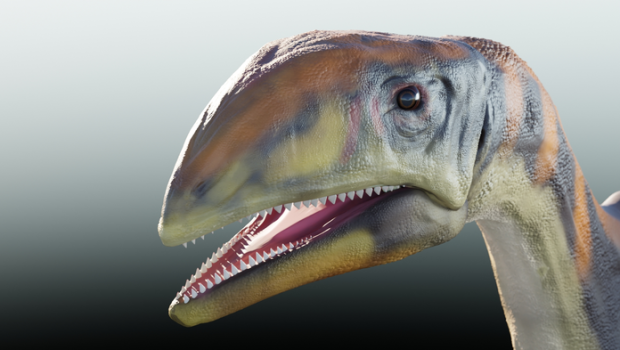 TORONTO – Researchers have identified a whole new species of dinosaur from well-preserved skulls found in Greenland: a two-legged herbivore that researchers say is the first evidence of a “distinct Greenlandic dinosaur species.”

Although the two skulls that helped make this discovery were unearthed in 1994 in eastern Greenland, scientists believed that one of the skulls belonged to a plateosaur, a long-necked dinosaur that was common in the Triassic in Germany. , in France and Switzerland.

Now, years later, researchers claim that the skulls are distinct in a way that makes it clear that they belong to a new species.

“It is exciting to discover a close relative of the famous Plateosaurus, hundreds of which have already been found here in Germany”, co-author Oliver Wings of Martin Luther University in Halle-Wittenberg, said in a press release.

A document published last week in the journal Diversity describes the new dinosaur, which was nicknamed Issi saaneq, chosen in homage to the Inuit of Greenland, which means “cold bone” in their local language.

Issi saaneq roamed Greenland 214 million years ago during the Upper Triassic Period, when Greenland was part of the northern edge of the Pangea supercontinent, which was just starting to break apart to form the Atlantic Ocean. Issi saaneq was a medium-sized dinosaur belonging to a group of dinosaurs called sauropodomorphs. This group includes the sauropods, the well-known huge, long-necked herbivores that feature in many dinosaur movies and settings.

The new dinosaur shares some similarities with the sauropods, such as a long neck, but would have been much smaller.

The researchers determined that Issi saaneq was a separate species after performing a micro-CT on the bones, then created a digital model of what the skull would look like if fully formed. This method also gave them insight into the internal structures of the skull that were not visible without damaging the bones.

According to the article, skulls differ from other similar dinosaurs by the combination of a few unique traits, including four cranial structures unique to Issi saaneq and differences in the length and shape of some bones from each other.

“The anatomy of the two skulls is unique in many ways, for example in the shape and proportions of the bones. These specimens certainly belong to a new species”, Victor Beccari, lead author of the article, who carried out the analyzes at NOVA University of Lisbon, said in the statement.

The two skulls differ in size related to each other, but researchers believe this is because one is an adult and the other is a juvenile of the same species.

Issi saaneq also has obvious similarities to a group of dinosaurs that were found in Brazil almost 15 million years before the existence of Issi saaneq, and researchers say these dinosaurs, along with Plateosaurus, are part of a subgroup of sauropodomorphs that encompass “relatively graceful bipeds” about 3-10 meters long.

According to the article, some of the traits found in Issi saaneq are those that were previously considered exclusive to species found in what is now Brazil.

The discovery of this new species adds another missing piece to the evolutionary story of sauropodomorphs and how these species spread across Pangea, Issi saaneq marking the first sauropodomorph to be found this far north.