The photo shows the fossil specimen of the Microraptor. Photo courtesy of the Institute of Vertebrate Paleontology and Paleoanthropology, Chinese Academy of Sciences

Chinese scientists have identified a new species of lizard from a fossil specimen of Microraptor, a flying dinosaur that lived in the early Cretaceous period.

Microraptor is one of the smallest carnivorous dinosaurs in the world. The fossil specimen of Microraptor was discovered in Liaoning province in 2005.

Scientists from the Chinese Academy of Sciences’ Institute of Vertebrate Paleontology and Paleoanthropology have found the remains of an almost complete lizard preserved in the stomach of the Microraptor.

The lizard differs from previously recognized early Cretaceous species due to its unusual teeth and bones. 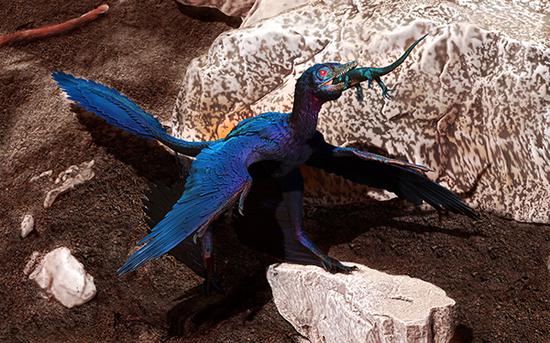 The photo shows the reconstructed scene of the microraptor swallowing the lizard. Photo courtesy of the Institute of Vertebrate Paleontology and Paleoanthropology, Chinese Academy of Sciences

According to Zou Jingmei, one of the researchers, this dinosaur is now known to have fed on mammals, birds, fish and lizards. This is the fourth documented occurrence of a Microraptor with preserved stomach contents.

The lizard is nearly complete and articulated, showing that it was swallowed whole and head first and indicates that Microraptor had a primitive digestive system and fed in a manner similar to living carnivorous birds and lizards.

Unlike fecal fossils and bone fossils, fossils contained in the stomach provide direct evidence of dietary habits. The relationship between these predators and their prey helps us better understand the whole ecosystem, according to Zou.

The research was published in the journal Current Biology.