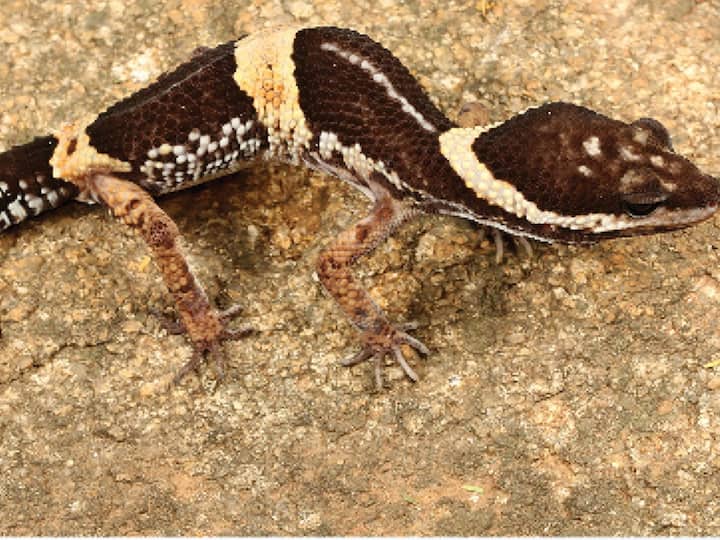 A species of colorful gecko has lived deep in the forests of Odisha and Andhra Pradesh in India for several years. However, the organism was identified as a new species recently.

A molecular phylogenetic study was conducted on the genus Eublepharis Gray, which revealed the presence of a genetically divergent sister line of the species Eublepharis hardwickii Gray, 1827. Researchers from the National Center for Biological Sciences, Bangalore and Madras Crocodile Bank Chennai Trust have recently re-evaluated the taxonomy (branch of science concerned with the classification of organisms) of Eublepharis hardwickii based on museum material in the light of molecular phylogenetic study. The results of the new study were recently published in the journal Scalable systematics.

Researchers have recognized two species distributed on either side of the Brahmani River in Odisha. The river crosses the Eastern Ghats.

What is an Eublepharidae?

Eublepharidae is a family of lizards that contains 44 species in six genera distributed in parts of North and Central America, West and East Africa, the Middle East, South Asia, South and the Malay Archipelago. The lizard family ranges from tropical to temperate latitudes.

Eublepharidae are less diverse than other gekkotan lizard families and are relatively understudied in their natural habitats, especially members of the genus Eublepharis, according to the study.

Previously, six species represented the genus Eublepharis. Of these, four were recorded in India. Eublepharis is the least frequented genus in terms of taxonomy, with a few exceptions.

Additionally, three genetically distinct lineages were identified in a recent phylogenetic evaluation of the genus Eublepharis. One of the three lineages is related to Eublepharis hardwickii, which is distributed in northern Eastern Ghats and parts of Jharkhand and South West Bengal.

In 1827, British botanist John Edward Gray described the species and said the specimen originated from Chittagong, which is likely an error as the species was never recorded in Bangladesh. After that, the species was recorded from several places in West Bengal, Jharkhand, Odisha and Andhra Pradesh.

How was the painted leopard gecko identified as a new species?

Researchers had found a gecko in a water tank near a temple in Visakhapatnam, Andhra Pradesh in 2017 during a field survey. Meanwhile, the gecko has been identified as belonging to the East Indian leopard gecko species, Eublepharis hardwickii.

In the recent phylogenetic study, researchers researched the evolutionary history and relationships within and between leopard gecko species in the genus Eublepharis. The study authors found that what had previously been thought to be a southern population of the East Indian leopard gecko may be distinct enough to represent a new species.

Once the researchers gathered enough molecular data to work with, they made morphological comparisons between species and examined specimens in natural history museums.

All About the Painted Leopard Gecko

The painted leopard gecko has a length of 11.7 centimeters and is a bit large for a leopard gecko, according to the study. The Brahmani River geographically separates the new species from the East Indian leopard gecko, with which it shares many similar traits.

Eublepharis pictus lives in dry evergreen forests mixed with scrub and grassland, and is strictly nocturnal. The gecko species forages actively along paths in the forest after dusk and licks surfaces as it moves, when searching for food. This suggests that the species uses its tongue at night as a sensory organ.

Researchers are concerned about the conservation of Eublepharis pictus, despite the fact that it appears to be widespread across Odisha and northern Andhra Pradesh. Additionally, researchers believe the species would have a better chance against humans if more people knew it was actually a pest. They suggest the species should be listed as Near Threatened based on the International Union for Conservation of Nature’s prioritization criteria, to ensure protection for the gecko, until more is known. on the size of its populations.