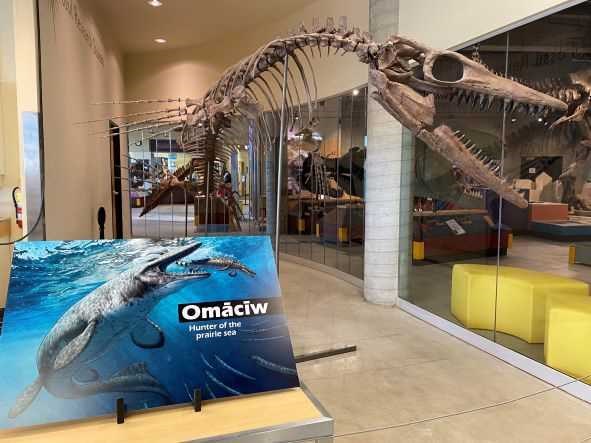 The Royal Saskatchewan Museum (RSM) T.rex Discovery Center in Eastend, Saskatchewan, unveils a new exhibit of fossils – a 10-meter (over 32-foot) mosasaur marine reptile found with the remains of a mosasaur 3 meters in his stomach.

The Royal Saskatchewan Museum (RSM) T.rex Discovery Center in Eastend, Saskatchewan, unveils a new exhibit of fossils – a 10-meter (over 32-foot) mosasaur marine reptile found with the remains of a mosasaur three meters in his stomach.

Mosasaurs were large marine reptiles that lived around 72 million years ago during the Late Cretaceous period. At that time, much of the Prairies, including Saskatchewan, was covered by an inland sea. Mosasaurs are related to modern monitor lizards and snakes.

The 10 meters Tylosaurus specimen, which was named “Omācīw”, was found in the hills around Lake Diefenbaker near Sask Landing Provincial Park. The smaller mosasaur skeleton found in Omācīw’s stomach is currently being reconstructed by RSM technicians.

“The T.rex Discovery Center is an incredible attraction and I encourage Saskatchewan residents to take the opportunity to experience Scotty and the rest of the Discovery Center offerings,” said Laura Ross, Minister of Parks, Culture and Sport. “This new Tylosaur exhibit is just another example of the great work done by our staff at the Discovery Center and RSM. There are fun activities and programs for guests of all ages.

“Scotty” is the nickname of the largest and oldest Tyrannosaurus rex fossil discovered to date. Estimated to have lived over 30 years, Scotty weighed nearly 9,000 kilograms (~20,000 pounds) and was 13.2 meters long (over 43 feet).

Scotty was first discovered in 1991. It took two decades to extract 65% of the skeleton from the rock.

Another popular attraction at the T.rex Discovery Center (TRDC) is the Paleo Lab experience. Visitors can interact interactively with staff and learn about ongoing research. RSM staff are working to uncover a number of fossils, such as another mosasaur discovered in 2012 in Grasslands National Park.

The TRDC is open daily from 10 a.m. to 6 p.m. at No. 1 T.rex Drive in Eastend. Admission is by donation. More information can be found at royalsaskmuseum.ca/trex.