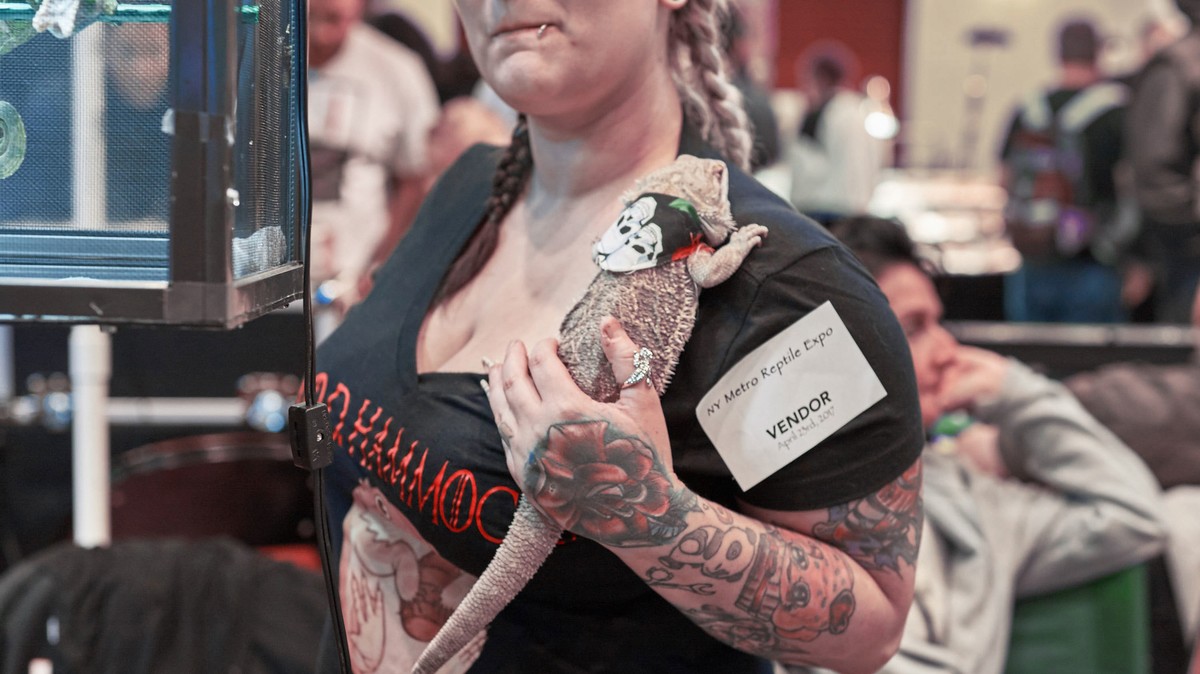 My pilgrimage to the reptile exhibit, a dark paradise for lizards

All pictures of Rion Harmon

Throughout the year, the Northeast Reptile Expo moves from conference center to conference center – bouncing between Long Island, NY, White Plains, NY and Manchester, NH – inviting hundreds of vendors to set up and exhibit their wares. This is the largest one-day exhibit of myriad snakes, lizards, toads, frozen rodents, and various reptile paraphernalia in the region.

I didn’t grasp the significance of this statement when I arrived at the White Plains exhibit a few hours after its 9am start time with my boyfriend and roommate. I own a chameleon – which I evangelize to all my friends, acquaintances and strangers – but in my heart I recognize that lizards are very niche and not so good as pets in the traditional sense. They are not friendly like dogs, or even rabbits, which are not so friendly but still allow you to hold them. (Chameleons squeal when you try to move them from wherever they are currently.) Some lizards are nicer – bearded dragons, for example, will let you pick them up, and they’ll stay flat like rocks once you will – but I couldn’t imagine there would be enough future reptile owners to warrant anything more than a modest day-long display of frozen snakes, lizards, toads, rodents and various reptile paraphernalia.

Read more: The Teenage ‘Lizbians’ Who Risk Everything To Assess Lizards

Boy, I was wrong. A thick line of people descended the steps of the lavish Westchester County Center steps to pay $10 to see the dizzying array of snakes, lizards, toads, frozen rodents and various reptile paraphernalia that indeed awaited them on the inside. I learned later that in July even more people come to the expo, “after the breeding season”. As I walked past the line to see if I could avoid paying the fee by confidently announcing that I was a reporter, someone who worked for the center made an announcement to the crowd. “Is anyone here for the Sports Hall of Fame?” he shouted, apparently trying to wave all the misguided sports fans out of line. Nobody moved.

They were all there for the reptiles. I was too, though I felt a strange sense of unease amongst my presumed people. Suburban teenagers roamed the expo in packs, many of them with a hairstyle or dress shape that signaled they were alt/emo. Parents were thrilled to have their young children holding snakes larger than their heads. Muscular guys were thrilled to hold snakes that were smaller than muscle. “I feel like I’m in Florida,” my boyfriend said with a slightly panicked look.

But if there’s one thing that unites reptile lovers, it’s the feeling of being overjoyed around scaly creatures who want nothing to do with you. It’s a feeling I know well; I experience this every time I take my chameleon, Drake, and he swells his body and turns black as a defense mechanism.

One of the first stalls I went to had a huge bearded dragon that was about the size of a chihuahua. I picked it up under her stomach, and it stretched the full length of my arm. “He likes the attention,” the bizarre lizard’s supplier said, as the bearded dragon made no indication that he liked or even knew what was going on. She went on to explain that the lizard I was holding was a specific breed of bearded dragon: a German giant.

“Do you know how dogs have breeds? Like the German Shepherd? she says. “That’s how it is, even though I don’t have any papers to prove it.” She said she was going to have him mate with her full-sized bearded dragons to test her theory.

I wished him luck and moved on to the next stall, ready to pick up more lizards and then put them down once I was satisfied. I couldn’t tell you exactly what makes people love reptiles. For the most part, you interact with reptiles just by looking at them, but you can certainly watch them for hours and be entertained. The fact that you can never tell what they are thinking or feeling because they react to everything as if it were a large predatory bird is both unsettling and fascinating. It also lets you project all the emotions you want onto them, which is fun. Reptiles’ complete disregard for human life also makes them excellent pets for sloths.

“I love snakes,” a girl named Katie tried to explain when I asked her why she bought a ball python, which she cradled in her arms. She said she had a hog-nosed snake at home and was excited to add a new one to her collection. “They’re usually really easy to maintain…and they’re just cool.”

It’s true. Even if you don’t want to own a reptile, it’s hard to deny that it’s cool. But, ultimately, the large amount of reptiles at the expo meant that the novelty of it all quickly wore off. Together, all the stalls contained thousands of lizards, snakes and frogs. It got a little dark. I started thinking about the lizards that didn’t sell, transported from exhibition to exhibition in tiny tupperware. I thought of an emo teenager neglecting his new pet, not realizing that even lizards need work.

The last booth I visited had a corgi-sized iguana in a cage; it was missing its tail and it was not for sale. When I asked the vendor, an older woman, what she was doing at the event, she sighed and said, “I don’t know. After some encouragement, she told me that she decided years ago to turn her house into a reptile sanctuary and take in lizards that were injured or needed a home. She has about a dozen lizards that people had abandoned — and she’s divorced, she added as a non-sequel.

If I was tired after spending an hour at the largest reptile exhibit in the northeast, she seemed absolutely defeated after coming to the exhibit for years. “I used to come here to try and connect people with my rescues, but people don’t really care anymore,” she said. She was too depressed to answer any more questions. A man wearing a paisley bandana and a paisley shirt knelt down next to his iguana and took a selfie, and I knew it was time to go.