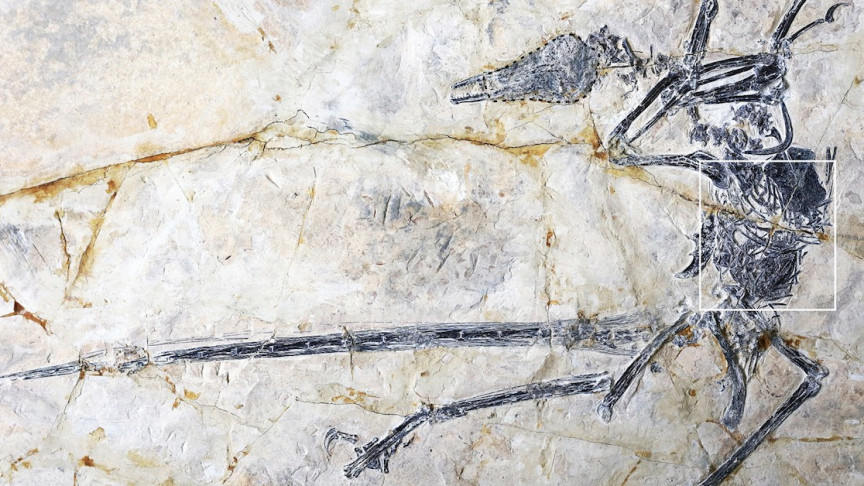 A team of paleontologists in China have discovered the remains of an ancient species of lizard in the stomach of a feathered dinosaur, the micro raptor.

The fossil of the four-winged dinosaur was found in northeast China, from 130 million years Jehol Biota, a treasure trove of fossils Cretaceous period.

The findings were published in Current biology Thursday.

RELATED: FOR THE FIRST TIME, RESEARCHERS IDENTIFY REDISH FUR IN A 3-MILLION-YEAR-OLD FOSSIL

It was the Fourth discovery of preserved stomach contents of a Microraptor fossil, but that was the first to reveal that they ate lizards.

Additionally, similar to the eating habits of our modern owls, the study showed that these Mircoraptors have a penchant for swallowing their prey whole and head first.

What this discovery shows is that these little flying dinosaurs ate what they could find in order to to survive. They weren’t known for being picky eaters, choosing to snack on anything they could: mammals, birds, fish, and now lizards.

The lizard that was found in the contents of the dinosaur’s preserved belly is now known as the Indrasaurus wangi. It was named after Professor Wang Yuan from the Institute of Vertebrate Paleontology and Paleoanthropology (IVPP) of the Chinese Academy of Sciences.

Indrasaurus stems from a Vedic legend where the god Indra was swallowed by a dragon in a great battle – the dragon in this case is the Microraptor.

Another great discovery! This is the dinosaur known as Microraptor, with a half-digested lizard preserved in its stomach. Delicious! https://t.co/7vuKqQPN76 pic.twitter.com/vhvBFI71Pj

Dr. Dong Liping, a former student of Wang and who conducted the most in-depth analysis of Cretaceous lizards ever, assisted in the research by closely analyzing the remains of the lizard.

Liping determined that this new species of lizard was the first discovery of its kind, but closely related to the Liushusaurus, a stocky, medium-sized lizard dating to the Lower Cretaceous.

What distinguishes this lizard from its relatives are its teeth.

This study will also prove useful in reconstructing the first Jehol Food Network.

“Although certainly preliminary, this food web indicates that fish was the most important food source for secondary and tertiary consumers,” the researchers wrote. “This food web can be used in the future to better understand the Jehol ecosystem.”