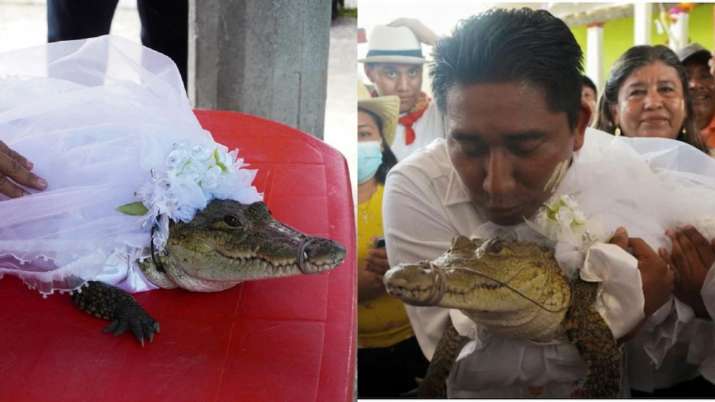 Among a number of videos that have been released in the past few days, this one caught everyone’s attention for one unique reason. It happens to be that of a Mexican mayor who married an alligator in centuries-old rituals. The incident happened in a small fishing village, Oaxaca, Mexico, where the mayor of San Pedro Huamelula, Victor Hugo Sosa, married a seven-year-old alligator dressed as a bride in white. He even kissed the reptile (the little princess) whose mouth was closed. Video of the ceremony was shared by Reuters and has now gone viral on the internet. For those unfamiliar, the tradition of marrying an alligator dates back centuries to pre-Hispanic times and takes place in the Chontal and Huave indigenous communities of the state of Oaxaca. It is made in order to make a prayer for the bounty of nature.

Reuter states that the reptile is considered a deity representing mother earth. The union of two marks the union of humans with the divine. The ceremony took place in the presence of trumpets, drums and dancing revelers. The mayor carried the bride in his arms as he crossed the street while other men fanned him with their hats.

While sharing the video, Reuters tweeted alongside, “In an age-old ritual, a Mexican mayor married his alligator bride to ensure abundance. Victor Hugo Sosa sealed the nuptials by kissing the alligator’s snout.”

The godmother who planned the wedding, Elia Edith Aguilar, told Reuters: “It gives me so much happiness and makes me proud of my roots. It’s a very beautiful tradition.”

Meanwhile, Mosa said, “We ask nature for enough rain, enough food, to have fish in the river.”

As soon as it was shared, it spread across the internet like wildfire. In a while, the video received nearly 2 lakh views and left netizens confused and amused. See the reactions that poured in on social media:

What do you have to say about the same?