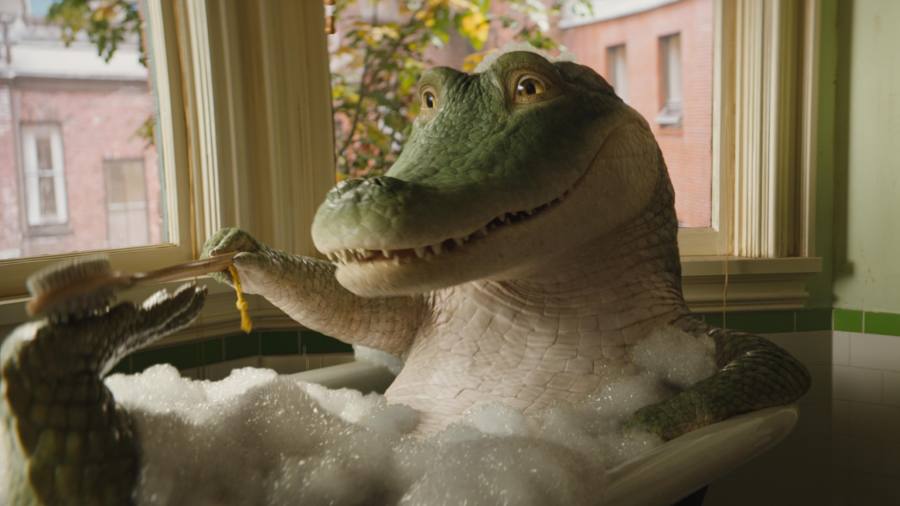 Like last year Clifford the big red dogthis utterly crazy but oddly endearing family feature revamps an old piece of children’s intellectual property – in this case Bernard Waber’s early 1960s books The house on East 88th Street and Lyle, Lyle, Crocodile. The action (directed by Josh Gordon and Will Speck) is relocated to present-day New York in a mix of real actors and digital wildlife. That means 106 minutes of watching Javier Bardem, Constance Wu and Scoot McNairy mug, growl and frolic as they pretend to react to the antics of a human-sized bipedal crocodile named Lyle, who doesn’t talk but sings with sweetness, radio voice of pop star Shawn Mendes.

The key conceit is that Bardem’s shadowy peddler Hector P Valenti tried to turn Lyle into a singing sensation via a TV talent show, but the timid semi-aquatic creature has terrible stage fright and can never sing at the moment. crucial. Valenti’s solution is to abandon his big lizard, leaving him alone in an Upper East Side apartment to be discovered by Josh (Winslow Fegley), the nerdy son of Mr. and Mrs. Primm (McNairy and Wu respectively).

A scene where Josh tries to convince Mrs. Primm to let him keep Lyle as a pet, arguing that this man-eating reptile is different because he wears a scarf, is gorgeous. Just like Brett Gelman (Flea bag, stranger things) as a neighbor from hell kvetching with a cute digital Persian cat named Loretta. But that’s not quite enough to lift the whole thing out of the weird vale of oddly-animated digital beasts and ill-conceived concepts.

In UK and US cinemas from 14 October