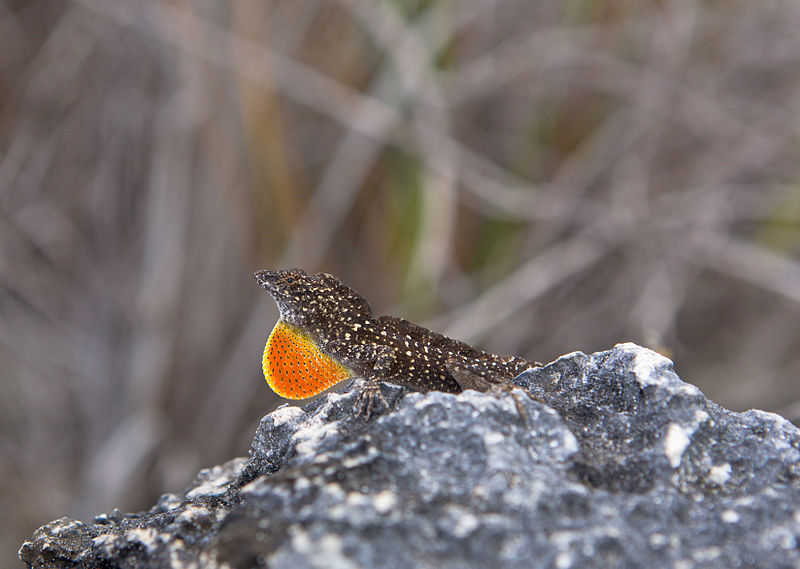 (Phys.org) —A team of researchers from several US universities found that male brown anoles (Anolis sagrei) – a type of lizard, greatly reduced its head-dancing mating dance when predators were introduced. In their article published in Proceedings of the National Academy of Sciencesthe researchers describe their field study of lizards and how it led to the discovery that an animal was able to change its mating behavior so quickly.

Male brown anoles, like many other lizards (and other species), engage in a kind of dance when trying to attract a mate. He shakes his head in exaggerated movements, puffs out his bright orange dewlap, and even does a few push-ups. Besides attracting a mate, the dance is believed to also serve as a warning to rivals to stay away. In this new effort, the researchers found that if predators entered the area, the males immediately attenuated their movements, apparently hoping to remain invisible, while attempting to attract a mate.

To learn more about the lizard’s mating patterns, the team of researchers ventured home to the Bahamas and began measuring the amount of movement involved in head bobbing with several specimens on several of the islands. Once that was done, they introduced curly-tailed carnivorous lizards, (Leiocephalus carinatus) on the islands, which are known to catch and eat brown anoles. After waiting some time to allow the new arrangements to settle in, the researchers again measured the distance the heads of several specimens moved as they engaged in their head dance, and found that the distance decreased significantly (up to 40%). They also noted that the lizards seemed more timid when dancing, doing so with much less enthusiasm.

The researchers speculate that the reduction in head movements was due to a desire to be less visible to newly arrived predators that might be in the area. How females reacted to weak mating gestures has not yet been determined, although it is likely that they would also prefer not to attract the attention of predators when mating.

The researchers note that many cases of animals changing their mating rituals have been observed over several generations in response to predators, but only one species changing its mating habits in its own lifetime has ever been seen before.

Summary
Signalers must effectively capture and hold the attention of intended conspecific receptors while limiting eavesdropping by potential predators. One possible mechanism for achieving this balance is that individuals modulate the physical properties of their signals, or change the proportion of time spent signaling, depending on local levels of predation pressure. We test the hypothesis that prey can alter their visual signaling behavior to decrease visibility and potentially limit predation risk through modulation of signal properties or display rate. To do so, we conducted a manipulation experiment in the wild to assess the possible effect of predation pressure on the physical properties of motion-based cues and the proportion of time spent signaling using a predator- well understood prey in the Bahamas, the semi-arboreal lizard Anolis sagrei, and one of its main predators, the curly-tailed lizard Leiocephalus carinatus. We find that on islands on which the predator was introduced, male anoles reduce the maximum amplitude of head displays, but not the proportion of time spent signaling, compared to control islands lacking the predator. This reduction in amplitude also decreases the signal’s active space, which could impair the reproductive success of signaling individuals. We suggest that future studies of predator-prey interactions consider risk effects generated by changes in signals or signaling behavior to fully determine the influence of predation pressure on prey population dynamics.

Rare and Huge Species of Lizards Found Alive in Şanlıurfa