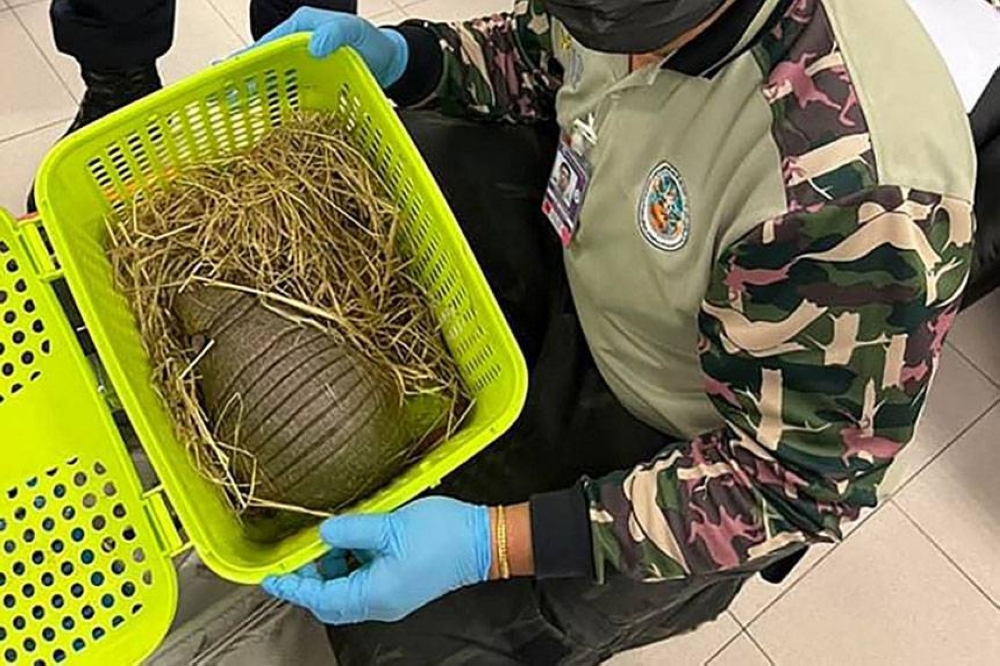 SAVED ME This photo taken on June 27, 2022 and released by Thailand’s Department of National Parks, Wildlife and Plant Conservation (DNPWPC) on Tuesday, June 28 shows an armadillo rescued after being found in the luggage of a passenger at Bangkok’s Suvarnabhumi International Airport. DNPWPC PHOTO VIA AFP

Bangkok: Two Indian women have been arrested at a Thai airport after trying to smuggle more than 100 live animals including armadillos, porcupines and snakes, wildlife officers said on Tuesday.

Thailand is a major hub for wildlife smugglers, with animals often destined for Vietnam or China, where they are used in traditional medicine.

The creatures were discovered when Nithya Raja, 38, and Zakia Sulthana, 24, walked through X-ray machines at Bangkok’s Suvarnabhumi International Airport on Sunday evening en route to the Indian city of Chennai, officials said.

“This kind of case has happened many times because animals have high prices in India,” Sathon Konggoen, head of the airport’s wildlife inspection office, told Agence France-Presse. (AFP).

Get the latest news

delivered to your inbox

“Animal trafficking is usually detected at Thailand-Myanmar borders and domestic airports to some extent,” he added.

Officers discovered two armadillos, two porcupines, 20 snakes, 35 turtles and 50 chameleons stuffed into a pair of bags belonging to the women.

Two dead iguanas were also found, while all the reptiles suffered from dehydration, according to a Facebook post from the Southeast Asian country’s Department of National Parks, Wildlife and Flora.

The creatures are being treated and will be transferred to an animal center or breeding facility, the department said.

The two women were charged with offenses under the laws on the preservation and protection of wildlife, animal epidemics and customs. They are being held in an airport police station.