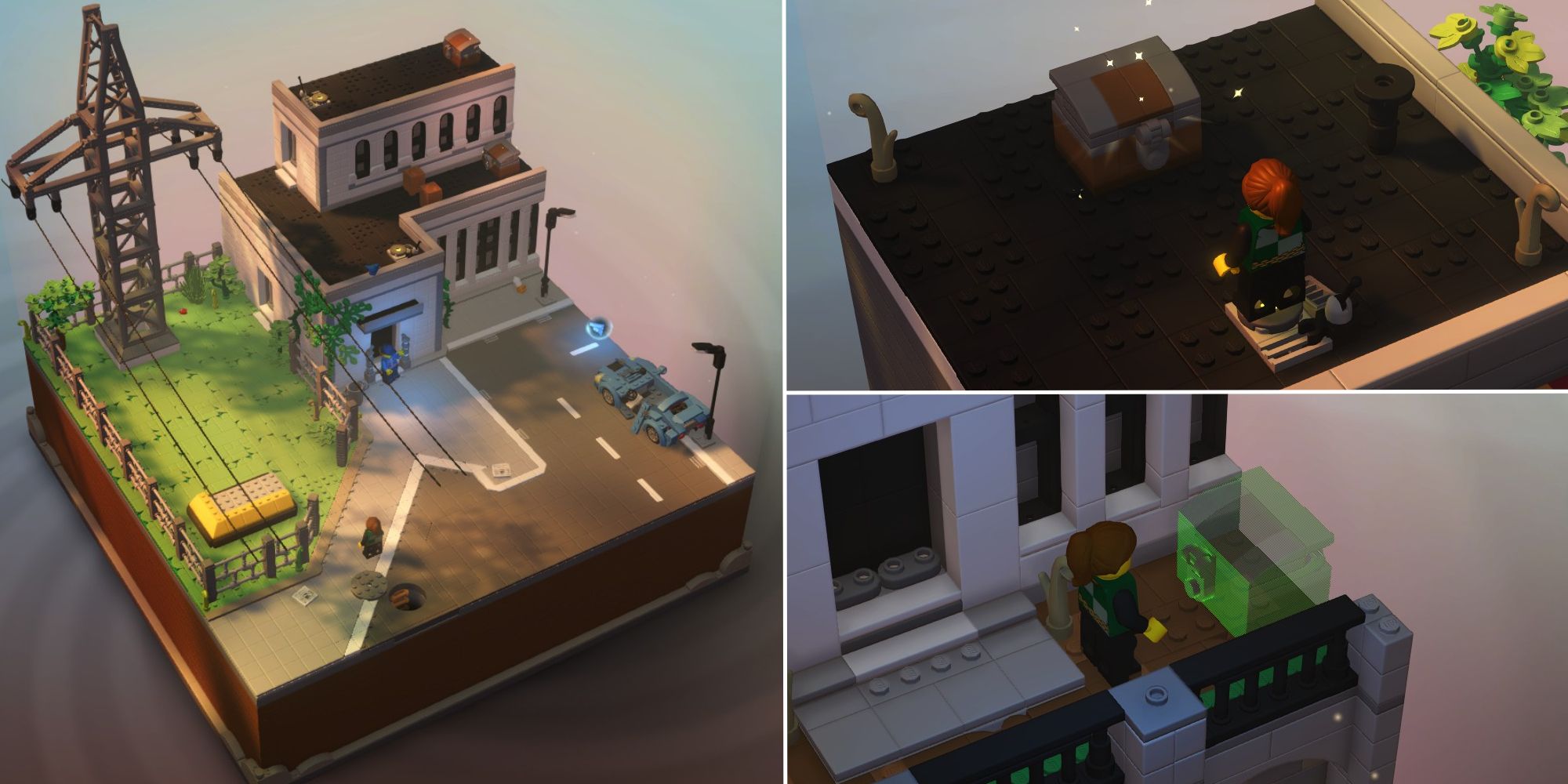 The fourth world in LEGO Brick Tales, the City, allows you to unlock the Electricity skill. Armed with this high-voltage power, you’ll be able to activate the teleporters you’ve seen throughout the game, reaching previously inaccessible areas. You’ll use the skill to good effect around the city, but you’ll still have to come back later with the fifth and final ability to find it all.

Use this guide to track down missing animals and treasure chests in the game’s plastic metropolis. With skyscrapers and sewers to explore, you’ll literally have to search high and low to find them all!

How to get the whip in the city

The whip in town is easier to find than most, but you can miss it if you’re in a rush. When you enter the sewers of Rita’s lab, descend the ladder instead of going straight to the power station. Break the blocks to your right when you reach the bottom and you’ll find the whip beyond.

When you rebuild the rainbow wall on the first roof, you can build stairs left to reach the bird above. This can be accomplished with the bricks at hand, but you can also enter sandbox mode after achieving the main goal of building without limits.

As you make your way through the sewers between Rita’s lab and the power plant, keep an eye out for the bird sitting on a rail at the bottom of the big ladder.

At the power station, use DImension in the upper left corner, near the steel tower, to reveal a valve. Turning it opens the back door of the building, which leads to the roof where you can collect the bird above the main entrance.

After building the bridge at the construction site, cross it and look to the right find a bird on a railing.

As soon as you arrive in town, look behind the park bench to your left. Clean the dirt using the Water skill to discover a chameleon.

When you return to Rita’s lab after learning the Electricity skill, use the top floor teleporter to reach the chameleon in the lower left corner.

While you’re following Rita through the sewers, wash the pile of dirt to the left of where it gets stuck. There is a chameleon below.

On site, walk to the right to find an alley between two tall buildings, where a chameleon waits in the corner.

Be sure to catch the ladybug sitting on the computer desk near the stairs in Rita’s lab.

In the sewers, just before the ladder that leads to the power station, turn the valve to the right to open a door below. Go through the door to find a ladybug on the other side.

Check the grassy area behind the power plant to find a ladybug near the power tower.

After building the crane on the construction site, take it up to the rooftops and use Dimension to reveal a valve on the right. Turn the valve to open the door in the alley below, which leads to a ladybug.

After talking to the Mayor but before entering the building behind him, use Smash to destroy blocks To the left. There’s a rabbit near the wrecked taxi.

As soon as you complete the Temple of Skills at the Power Plant, go back through the car park manhole to return to the sewers. Once inside, immediately use Dimension in the lower left corner of the platform you are standing on. Take the teleporter revealed at the rabbit below.

When you return to the starting area with the Electricity skill, use Smash to pass the blocks near the car crash on the left side of the screen. Beyond that is a teleporter that will take you to the rooftops, where you can pick up a rabbit.

Once you’ve pulled the lever that allows Rita to cross the sewer chasm, use the teleporter on the right to take a small detour before following her. It will take you to another teleporter, which in turn will take you to a ledge that can only be climbed if you have the whip. At the top is a rabbit.

Look to the right of the Power Plant entrance to find a Hermit Crab on the sidewalk.

Once you have learned the Electricity skill at the Power Plant, return to Rita’s lab. Use the teleporter near the original entrance and turn the valve to your left. This opens a door behind Rita’s machine, which leads to a Hermit Crab behind a Smashable block.

After helping Rita through the hole in the sewers, use the teleporter on the right before following her into the next room. There is an easily accessible hermit crab on the other side.

On site, use Smash skill to get behind the truck in the upper left corner, where you will find a crab.

You will receive a chest for completing the Temple of Skills inside the Power Plant – be sure to open it before you leave!

Outside the powerhouse, find the valve that opens the back door by using Dimension in the top left corner of the map. Go inside to reach the roof, and Break the blocks on the right to reach the hidden chest.

After completing the Temple of Skills inside the Power Plant, return to the rooftop described above and use the teleporter to reach the other chest.

Once you have the Electricity skill, head back to the sewer area that leads from Rita’s lab to the power plant. Go through the door at the bottom of the large ladder and use Dimension to reveal a teleporter on the other side. The teleporter takes you to a pile of dirt, which reveals a different teleporter.

Go back to the main area and go down the corridor to the right of the ladder. When the camera angle changes, there will be a teleporter to your left. Use it to reach the newly discovered cushion and adjacent chest.

In the starting area, use Dimension at the top of the fire escape to reveal a teleporter. When you have the Electricity skill, you can use it to reach the opposite roof and open the treasure chest there.

While you’re helping Rita through the sewers, use the teleporter near the switch that extends the bridge for her. Use the second teleporter at the bottom, then follow the path to the end. There is a hidden tunnel on the left that you can Fight your way through. Beyond that, use Dimension to reveal a chest inside a seemingly empty alcove.

Once you have completed the Caribbean, return to the place described above and use Dimension to reveal a Hover Rail in the bottom left corner. Climb it to the other side of the room to find another chest.

On the way to the chest above, you can use the Hover rail between the first and second teleporters to reach a valve. This opens the way to a chest near the room’s exit, which you can pick up on the way out.

When you mount the crane on the roofs for the first time, use Dimension make a valve appear on the right of your landing zone. This will open the door in the alley below, which leads to a chest. Note that the treasure must also be revealed with Dimension.

The valve described above also opens a door on the right side of the alleyleading to another chest.

After learning the Hover skill in the Caribbean, return to Rita’s lab. If you haven’t done so already, use the teleporter near the street entrance to reach the valve that opens the way to the back room. Inside, use the Hover rail to reach a hidden treasure chest.

Enter the Power Plant Sewers and go down the ladder. Walk right until the camera angle changes, then walk left along the edge of the map. Look for a Hover Rail (you may need to reveal it with Dimension first) and ride it up to a switch covered in dirt. Clean it using the Water skill and activate it to lower the chest elsewhere in the area.

Collect the whip if you haven’t already, then go through the door at the bottom of the big ladder and ride the rail to the chest to collect your prize!

When you collected all twenty birds throughout the game, return to the starting area of ​​the Town and visit the bird watcher in the alley under the fire escape. She will give you a treasure chest for your efforts.