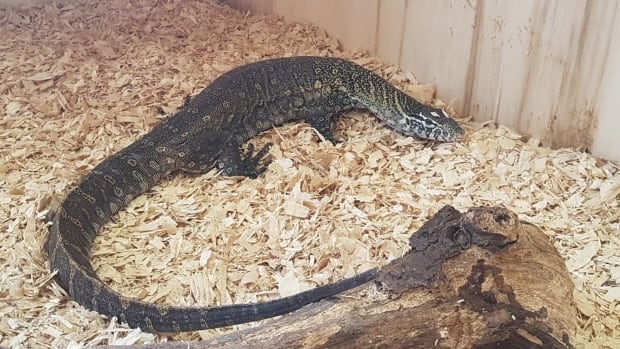 In a small space under the reception of the Little Ray Reptile Zoo and Nature Center, the search for a missing Nile monitor came to a halt on Friday morning.

Markhor, a three-year-old, three-foot Nile monitor went missing from the zoo in June.

Kevin Dungey, the manager of Little Ray’s on Barton Street East, has been devastated since Markhor’s initial disappearance. A Little Ray’s employee for nearly 20 years, Dungey said he “took it very hard.”

After spending about 16 hours at the zoo that day, he searched what he thought was “every square inch” of the facility.

“I don’t think I slept that night, and I was back the next morning,” he said. “I was pretty devastated. I felt like I let down my team, I let Ray down. It’s a tough thing for me.”

A call with good news

Over time, he had even been surprised that there was no sign of where Markhor was, like a stray piece of skin.

By the time of his disappearance, Little Ray’s back door had been left open and Dungey finally accepted the fact that he might not return or “might even live in Lake Ontario,” he said. -He’s joking.

After employing search teams and sending out press releases, the zoo’s plight was ended when Dungey received a call from its chief curator on Friday morning.

She had good news: Markhor was seen coming back through a hole he had been hiding in from the start.

That hole was a three-inch hole under Little Ray’s landing – a hole Dungey didn’t even think Markhor could get through.

“Apparently he did,” Dungey said. “He went back there, [the curator] I had to physically take part of it apart and get it out of there, sent me a photo at home and just started calling people to share our story and share my happiness. ”

“Today I feel pretty good,” he said on Friday.

According to Dungey, reptiles and cold-blooded animals don’t need a lot of energy to survive. A lizard like Markhor can go up to six months without food if it cannot be found in the wild.

When asked if Markhor could have been hiding in several places on the premises, Dungey said he believed he lived under the desk “all the time”.