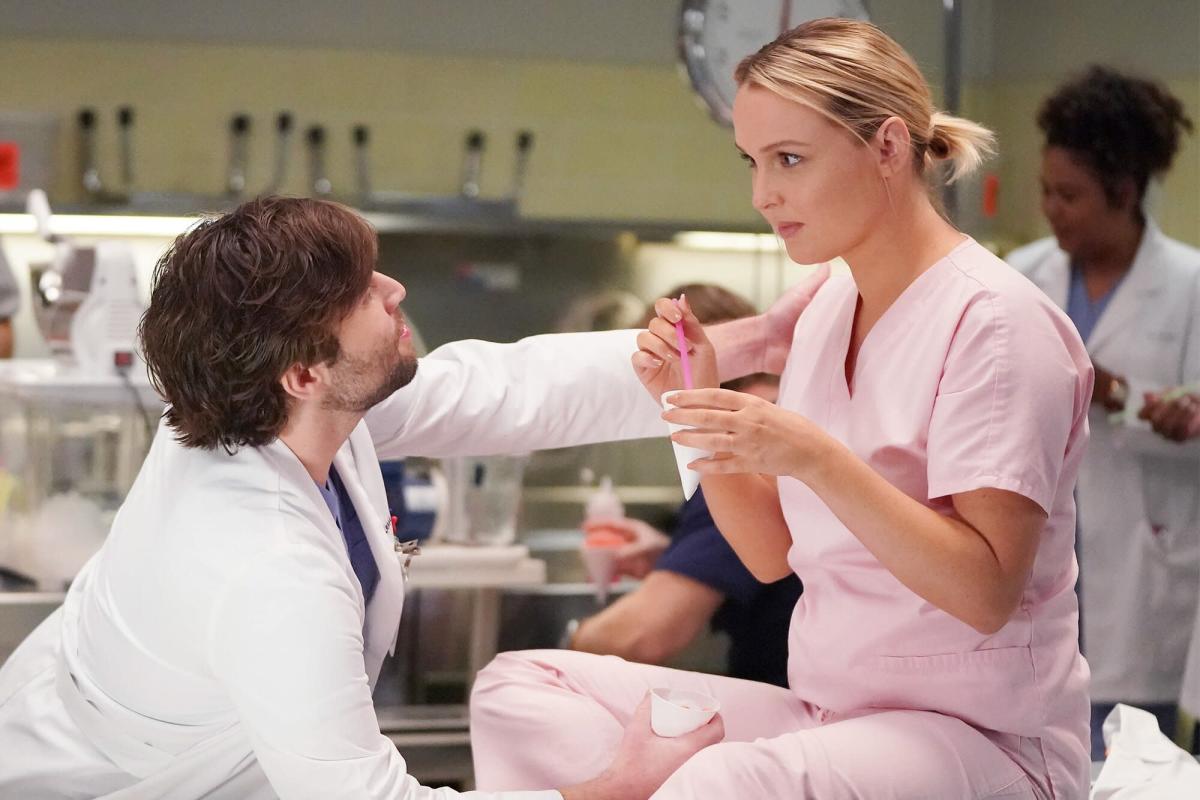 Camilla Luddington joined Grey’s Anatomy in its ninth season. Now, over 200 episodes later, it’s safe to say she’s seen Jo through many, a lot twists. But season 18 sees Jo try a few things for the first time: she’s changed her specialty to OB, she’s a mom, and she’s a blonde!

EW spoke to Luddington about Jo’s journey and the story behind her new “do.”

ENTERTAINMENT WEEKLY: You’ve played Jo for so long and seen her go through so many ups and downs. What was your reaction when they told you she was going to be a mom?

CAMILLA LUDDINGTON: It’s my 10th season on the show, so I wanted a lot of things for Jo, like finding out about her past, and one of the things I always wanted was for her to have her own family. I felt like it was really important to her. When they told me she was going to be a mom, the first thing I said was, “Who is she with?! She’s not seeing anyone. How’s it going?”

At first, I thought maybe she was going to have a donor. But when they told me the story, I thought it was so beautiful. I was happy that she became a mom, and I think that really influenced her to want to be an obstetrician and give birth. This part of his journey with [her new child] Luna, I love her so much for her. It’s crazy and she’s tired, but I think she finds so much joy every day in being a mom.

It’s also like, especially after seeing her get a happy ending with Alex (Justin Chambers) only for him to leave her, fans have been waiting for her to have something like this.

Yeah, and breakups are really hard, but what I love about this story is that life is unpredictable like that, and people leave people, and they break up, and your original idea of ​​the place where you think your life is going to go sometimes takes a sharp left turn. There’s probably a lot of people who watched those seasons where she was left behind and who might relate to a breakup like that and have to re-evaluate what’s important. That’s what she did: how can I find my happiness without that person being there? I think that was an important story to show.

It occurred to me when I was watching the last episode that I felt like OB is a specialty that we haven’t seen much of, compared to the others at least.

I agree with you! It’s funny because I gave birth to my son last year and I know Jo finds great pleasure in giving birth, but I, Camilla, am so excited to enter the delivery rooms! The joy you see in Jo is also mine. I feel like congratulating the actors. I’m like, “Oh my god, you’re having a baby today. It’s so exciting!” [Laughs] I find great joy myself. From your perspective, it feels fresh and new. And it’s also fun to watch her have to start over. She’s back in the residents’ lounge.

Will we see her learning from Addison (Kate Walsh) or is it mostly Carina (Stefania Spampinato)?

Right now it’s really Carina. I don’t know what the writers are planning for the future. There are so many episodes to do that we haven’t read, so right now that’s what you see, who Carina is.

I loved this scene where Jo fell asleep on a bench outside the hospital.

You know what’s great about that? Luna is one year old and I also have a one year old. During filming, I’m so tired because he’s teething and she’s teething, and so what you see is my life basically. [Laughs] They don’t need to make me look tired – I arrive as if I’ve never slept. It is this parallel that is happening, so [with] when she fell asleep on the bench, I said to myself: “I’m starting to get a little tired just filming this.” I’m going all out with the method this season.

Let’s talk hair. Is this change coming from you or from the series?

I wanted to change it. During breaks, I always change my hairstyle, then I have to go back. I got a little blonder this time and thought, “I feel like Jo needs a change. She’s been through a divorce and now she’s got a baby.” There are many times in my life where I go through different seasons where it reflects in my appearance. I could dress differently, or I could change my hair.

I called Krista Vernoff, our showrunner, and said, “Is it okay if I keep my hair blonder?” I sent her a picture and she said, “If you want to do this, I want you to go platinum.” And I thought, “Perfect! It’s done.” I said, “Can I cut it short?” and she said, “Yes, we’ll write it.” So they wrote it down saying she left bleach on her hair too long and fried it. But I love it for her right now. I make her want to feel a little different.

What surprised you playing this character for so long?

It’s not about keeping it interesting and new, because every season is really exciting. The writers always have such surprising plots that change everything. There’s no element of “Ugh, how do I keep this interesting to myself?” In fact, when you sit with a character for this long, things in their life start to parallel yours. When I started, I was dating my current husband. Now I’m married and have kids and feel more confident in my career, and Jo is excelling in her career and has kids. It’s like growing up with a friend. That’s the surprising part of the experience, when you’re sitting with someone for so long. You are so invested.

This interview has been edited and condensed for length and clarity.

Register for Weekly entertainmentthe free daily newsletter of to get the latest TV news, exclusive first looks, recaps, reviews, interviews with your favorite stars, and more.