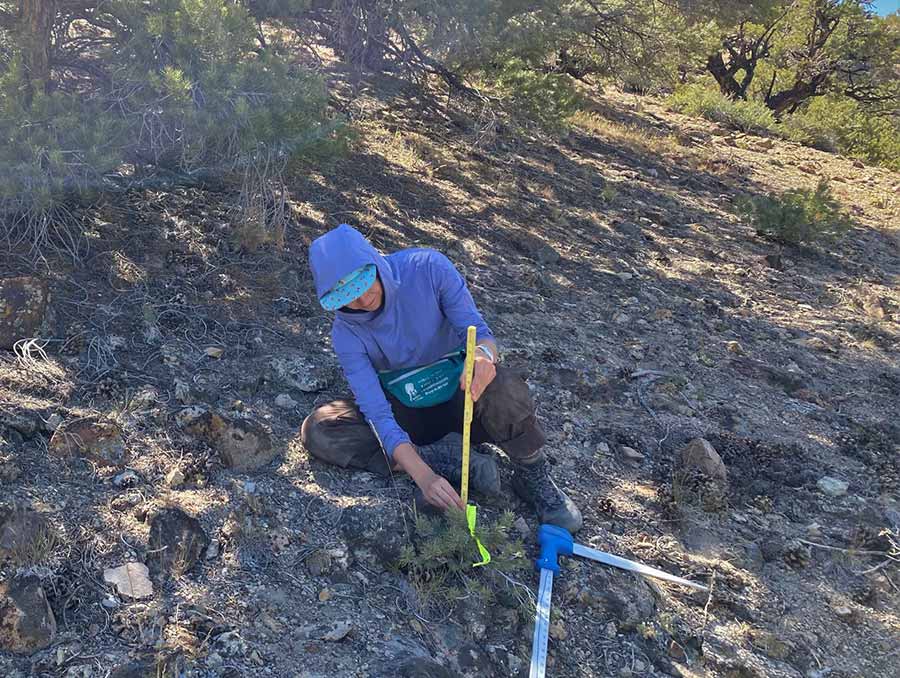 The pine and juniper forests are home to unique wildlife and wildlife habitat, as well as areas for hiking and outdoor recreation. They are also part of a network of healthy ecosystems that together help balance water availability, storage and runoff; and prevent erosion. A new study published in Global Ecology and Biogeography and led by the University of Nevada, Reno researcher Robert Shriver sheds new light on what’s happening in western pine and juniper forests. The research is unique in that it looks at both tree mortality, as well as recruitment, or new seedlings and saplings, to calculate a ‘net effect’. And the news isn’t necessarily good, especially in hotter, drier places.

“We found that four of the five species were in decline,” said Shriver, an assistant professor in the university’s College of Agriculture, Biotechnology and Natural Resources. “And, in the driest and hottest places, up to about 50% of the populations are in decline. It’s pretty bad in those places, which are generally at lower elevations that tend to be warmer and receive less water than forests at higher elevations.

Shriver said looking at all the sites surveyed, which included more than 6,000 plots and more than 59,000 tagged trees, up to 10-20% of the populations were in decline. Of the five species, including two pinyon pines and three junipers, Pinus edulis, more commonly known as two-needle pinyon or simply pinyon, has experienced the greatest declines, with around 24% of its populations in decline. The other pinyon species and two of the juniper species showed more moderate declines overall, but still quite severe declines in hotter, drier areas. These species include Pinus monophylla (single-leaved pinyon), Juniperus monosperma (single-seeded juniper), and Juniperus scopulorum (Rocky Mountain juniper). Juniperus osteosperma (Utah juniper) was the only species that did not show decline.

“Utah juniper was the exception to everything,” said Shriver, who conducts research as part of the College’s Department of Natural Resources and Environmental Science and Experiment Station. “What we found roughly matches what we know about the resilience of this species. It is the most abundant in the Great Basin and it is generally less vulnerable to warmer and drier climatic conditions, which could mean that there could be compositional changes in the future, where some areas composed of species mixed may become more juniper dominated. ”

In part, Shriver used data from the Forest Inventory and Analysis, a national survey of forested land in the United States, conducted by the US Forest Service.

“They tag the trees and come back to the same plots for comparison at least every 10 years, but they have a systematic pattern to figure out where,” he explained. “They make sure to get a wide cross section of federal and private land. The result is a representative sample of what all forests look like in the United States, covering even very remote locations. It’s staggered, with 10% of plots surveyed in a given year.

Shriver said the plots included in this pinyon-juniper research were first sampled between 2000 and 2007, and were surveyed the second time between 2010 and 2017. These are the data obtained during these periods of 10 years that he used for research. He pointed out, however, that the Forest Service survey doesn’t capture as complete data on recruitment or seedlings because they don’t mark anything less than 1 inch in diameter. Trees of this size are counted, but not labeled.

“Recruiting is the hardest part,” he said. “Tree mortality is easy to see, but recruitment is harder to observe, so it was harder to explain. Population stability depends on both mortality and recruitment. We therefore developed a new statistical approach that allowed us to understand and take recruitment into account. Using these modeling approaches we were able to quantify the recruitment rate in these different areas and then combine this data with the mortality data to get a clearer and more accurate picture of what is really happening in terms of species change. . populations under different climatic conditions and forest densities in different regions.

The search excluded plots where fire mortality or intentional tree harvesting has occurred, allowing researchers to more directly observe changes that have occurred due to climatic conditions in each species’ range.

Shriver says the population declines they calculated could be significant for a number of reasons.

“In terms of wildlife, probably the biggest effect is on the pinyon jay, which has been in decline for two decades and is really dependent on the seeds produced by the pinyon pine,” he said. “The areas where the pinyon jay tends to choose are on the border of sagebrush and pinyon. It likes habitats that are probably the most vulnerable. But, beyond the pinyon jay, a number of species could certainly be affected – mule deer and other birds and wildlife.

What does the future hold?

“We’re likely to see some pretty big shifts in where we find forests in the Great Basin and the Southwest over the next few decades,” Shriver said. “A lot of places where we saw forests, we might not see them, especially at lower elevations because they tend to be the hottest and driest.”

Shriver said there has been a lot of expansion in these forests since the mid-1800s, and some decline may not be a bad thing everywhere. For example, in some areas pinyon and juniper forests have encroached on shrub ecosystems that provide important ecosystem services and unique wildlife habitat. And, trees, especially when they are too dense and without enough moisture, also increase the intensity of wildfires.

“Our results also suggest that for some locations, management actions could slow or reverse forest decline,” Shriver said. “As it gets hotter and drier, the density of trees that a landscape is able to support decreases, so reductions in tree density could expand the envelope of the where trees can be found, reducing the risk of large tree mortality events.”

While declining forests could create an opportunity for the expansion of native shrubs such as sagebrush, Shriver warned that other less beneficial vegetation could also take hold.

“Just because pinyon and juniper die doesn’t mean something desirable would establish in their place,” he said. “You might have cheat grass or other unwanted vegetation.”

Shriver said the purpose of the research and the models he has created is to help anticipate the vulnerability of forests and predict future range changes, so that we may be able to influence the results for to be more positive.

“If we know where this is likely to happen, we can do our best to influence what might happen next,” he said. “We might be able to direct them to ecosystems that could support native plants and animals in the Great Basin and Southwest, and integrate into our watersheds in beneficial ways.”