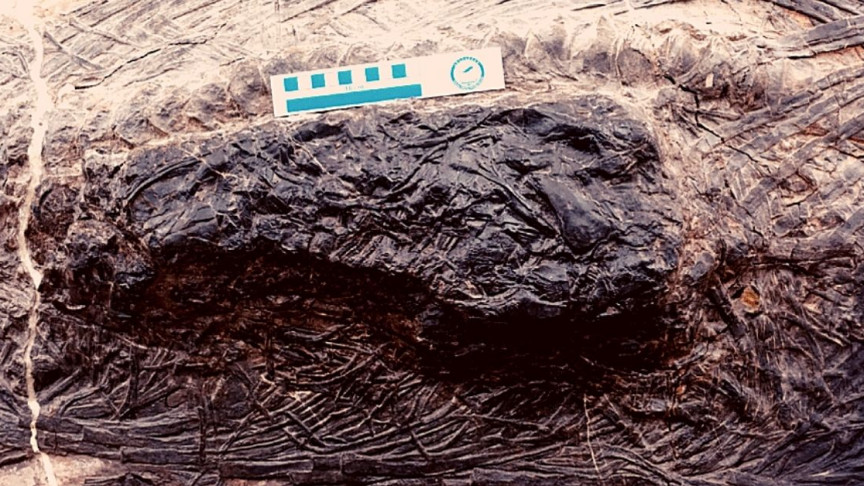 A team of scientists has discovered a 240 million year old reptile measuring 15ft (4.5m) long containing the remains of a second 13ft (4m) thalattosaurus or ‘sea lizard’ – shortly swallowed long before the largest reptile’s death, according to a recent study published in the journal iScience.

RELATED: A PREHISTORIC SHARK FROM THE ERA OF DINOSAURS HAS BEEN FOUND OFF THE COAST OF PORTUGAL

Hundreds of millions of years ago, the seas turned with the movements of reptilian predators called ichthyosaurs. Their fossils are haunting, but Ryosuke Motani, a UC Davis paleobiologist, said they could have appeared as friendly dolphins.

“Maybe in real life ichthyosaurs would have been cute, at least the smaller ones,” he said. American Scientist reports.

Motani’s team of scientists discovered the new specimen in southwest China and noticed the second animal in the belly of the bestial ichthyosaur because it had not yet been digested. This means that the ichthyosaur died shortly after swallowing it.

The prey of a giant reptile fought for its survival

However, Motani was not comfortable attributing the reptile’s death to the giant meal, although the larger specimen had its neck broken. This led him to speculate that the ichthyosaur had snapped at the sea lizard, but his alleged meal resisted.

“And that fight between the two was fierce, probably,” he said, reports American Scientist.

As the ichthyosaur attempted to subdue its prey by snapping its neck, it also had to disjoin the smaller creature’s bony head and tail from its more appetizing midsection.

“Now the predator had to do it by shaking and writhing like crocodiles do,” Motani added to American Scientist.

Repeated sudden movements are not good for anyone’s neck. Eventually, the ichthyosaur had to swallow the animal – perhaps with the help of inertia or gravity to pull the prey down its throat.

“And there’s a good chance that by the time it was ingested, the damage to the neck had accumulated to some level and maybe the neck couldn’t support the predator’s head well,” Motani said. .

Studies of this prehistoric battle are important because scientists can only deduce to a limited extent which creature ate what – judging by teeth alone. The latest fossil evidence directly supports the conclusion that sometimes ancient monstrous reptiles bite off more than they can chew.