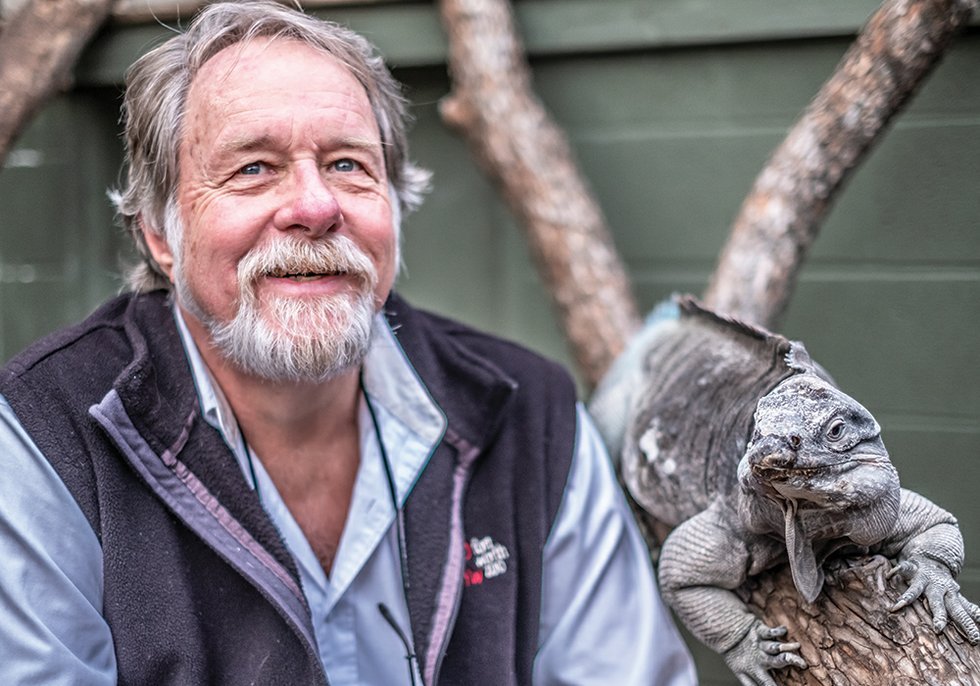 Growing up in the heart of the Blue Ridge Mountains, Rick Hudson had no shortage of unique creatures to catch when he was young.

If there was anything in his path that was crawling, jumping, or sliding, he probably brought it with him to his home in the small rural town of Stuart, Virginia.

Now, at 67, Hudson is the Fort Worth Zoo’s longest-serving employee and has the longest tenure on staff after coming aboard in 1980.

Spanning more than four decades, Hudson’s entire career has been spent at the Fort Worth Zoo, where he now specializes in the conservation of tortoises, tortoises and iguanas.

He attributes his success to the generosity of the community and the willingness of zoo leaders to prioritize the survival and recovery of species.

“When there’s a wildlife crisis out there, people know and expect me to be in the trenches to fight where I can,” Hudson says. “I’m sick of crisis management, but I’m damn good at it.”

And he has his endless list of accolades, accomplishments and awards to prove it. Most recently, he received the Columbus Zoo’s 2021 Commitment to Conservation Award for his “drive, heart and collaborative spirit.”

“Whether he was working on restoring the endangered Jamaican iguana population through start-up and reintroduction programs, helping to save radiated tortoises from mass confiscation in Madagascar or establishing populations of Ensuring species at risk in range nations, Rick’s work has made a profound impact on conservation,” said Tom Schmid, president and CEO of the Columbus Zoo & Aquarium.

A passion for life

From the start, Hudson knew he would be a zoo man.

He was the kid all the townspeople called to when they needed to remove a bug, a lizard, a snake – or basically any creature that would send shivers down your spine.

But it was inevitable that it would become his career after he opened his own miniature zoo in his backyard at the age of 12, showcasing the best of the local lizards, frogs, turtles, snakes and salamanders he had caught.

Still tutored at his home today, the local newspaper quoted the pre-teen as saying he hoped to “become a naturalist and work in a real zoo” when he grows up one day.

The whole family supported the business, he says, and while he commissioned his father to build habitats for his ever-growing hobby, his mother accompanied him in his search for box turtles after the rains. summer.

Hudson clung to his passion throughout his childhood and later attended the University of Richmond, where he earned his bachelor’s degree in biology.

Ironically, career opportunities in rural Virginia — the very place where he provided unprofessional care for abundant wildlife — were scarce.

While job hunting, he remembers flipping through the pages of a wildlife magazine and spotting an ad for the Fort Worth Zoo opening.

He had never been to the zoo, or even to Texas, but he admired its herpetology department, so he quickly put his name in the hat for the job.

After receiving an interview request from the zoo, Hudson made the 5 p.m. trip with his sister – eager but nervous to impress.

“I remember getting a phone call from the zoo saying I got the job,” Hudson says. “It was the day my life changed.”

Although Hudson has always had a preference for reptiles and amphibians, he says his love for them has certainly grown over the years.

As assistant curator for reptiles for 20 years, Hudson played a key role in strengthening the zoo’s herpetology department. And he’s proud to be acclaimed for bringing one of the zoo’s most beloved species – the Komodo dragon – along with the gharials.

But an urgent need for help in the wildlife crisis prompted Hudson to change direction, and in the early 2000s he began his career conserving turtles, tortoises and iguanas.

“When I came here, I had read an article about the Jamaican iguana,” says Hudson. “They had found one that they thought had been extinct since the 1940s. I remember how much reading this article really touched me; it really marked the rediscovery of this species. And it stuck with me. »

From then on, Hudson says he became more involved in the rediscovery of the species, leading programs to revive them from the brink of extinction.

With support from the Fort Worth Zoo, he founded the International Iguana Foundation and the Turtle Survival Alliance—now his full-time job at the zoo—traveling the world to save them.

Before the pandemic, Hudson traveled frequently to Madagascar to rehabilitate sick and injured turtles that had been rescued from the wildlife trade.

“We’ve seen some pretty brutal things from animals, and it’s hard to see,” Hudson says. “But you have to be optimistic if you’re passionate about wildlife conservation.”

Currently, around 26,000 rescued turtles are waiting to be released into the oceans, which he says requires extensive community negotiations.

“We can’t just release them with poaching people,” Hudson says. “We have to find the appropriate habitat, and we have to have a community that really wants to protect them.”

A conservation hero, Hudson has no desire to stop during such a perilous time for wildlife.

“I can’t walk away,” Hudson says. “Conservation is my life.”