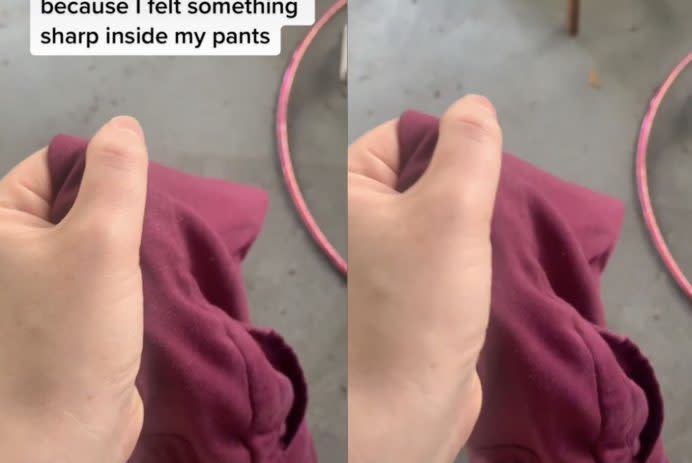 Florida woman finds wild animal crawling in her pants: ‘I felt something sharp’

A Florida woman got a pretty epic surprise in her pants thanks to Mother Nature.

After putting on some pants, TikToker @uss_andrea felt something sting her. She gripped the source of the discomfort in her hands, then took off her pants to see what it was. The discovery left her horrified.

Check out all of Christian Cowan’s haute couture looks from his In The Know shoot:

“I just took my pants off because I felt something sharp inside my pants,” she said. “I put my hand around the pointy thing, and now we’re going to find out what it is.”

She slowly started removing the fabric, which was interfering with what was in her pants.

After the tail was revealed, she recognized the creature as a living lizard and released it back into her garden.

“I just want everyone to know that I wore lizard pants for about ten minutes before I noticed there was a problem,” she added in the comments section.

The video has racked up 5.3 million views on TikTok. People might actually relate to the bizarre situation.

“My friends baby was crying and we didn’t know why. There was a lizard in his diaper,” one user shared.

“I had jeans on one day and this happened. I’ve never gotten out of pants so fast in my life!” one person wrote.

“He just wanted to make sure you knew you could save 15% or more on your car insurance,” someone joked.

Shop the black-owned brands Luka Sabbat wore for his In The Know cover:

The post Woman finds wild animal crawling in her pants: ‘I felt something sharp’ appeared first on In The Know.

If you’re hot all night, you need this cooling blanket that feels like ice silk.

In search of the most important species on the planet

Reptile longevity is even more complex than we imagined – study