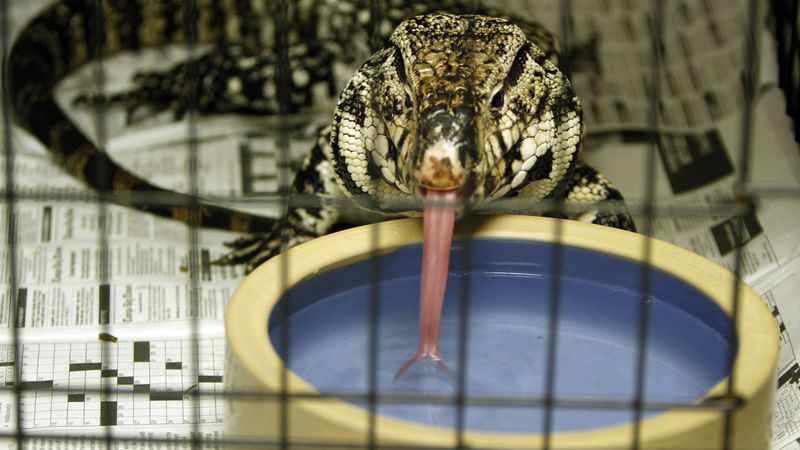 Florida restricts the possession and private breeding of certain exotic animals, including Burmese pythons, green iguanas and tegu lizards, citing concerns about invasive species invading the state. This decision is met with strong opposition from enthusiasts and reptile dealers.

“The environment trumps livelihoods over it, unfortunately,” said Rodney Barreto, chairman of the Florida Fish and Wildlife Conservation Commission. He and his colleagues voted unanimously on Thursday to support the policies. “It’s not an easy decision, but it’s a decision we have to make.”

The rules prohibit people from owning as pets or raising for sale any animals, including: Nile monitor lizard, Burmese python, North African python, reticulated python, tegu lizards, iguanas greens, the southern African python, the amethystine python or the brush python. Some, like the iguana and the Burmese python, are well established and breed in Florida. Others, like reticulated pythons which can grow to over 20 feet, are not, but state wildlife regulators say they want to avoid problems before they arise. They worry about escaped and released animals that create or increase wild populations.

“These animals do a lot of damage,” said Commissioner Robert Spottswood.

People who have iguanas and tegus will not need to return or kill them immediately. Owners can keep currently legal pets until they die. Some breeders will be allowed to import and own species in the future, under specific conditions, for limited uses such as exhibitions or research. They will also be able to capture wild tegus and iguanas for sale or send them out of state, according to a state submission, and the ban on breeding these lizards for commercial sales will not begin until 2024.

Critics tried Thursday to dissuade the commissioners, describing their personal attachment to reptiles. People misunderstand snakes and lizards, they said, comparing their chosen pets to dogs and cats. Several callers logged into the meeting from out of state.

“People who own reptiles have a mental and emotional connection with them,” said Nicole Tisdale, who said she has reptiles living in Maryland and reconsidered moving to Florida due to the new rules. “They are part of our family, they are part of our being.”

Ahead of the vote, Melissa Tucker, who heads the commission’s Habitat and Species Conservation Division, described the problems invasive reptiles are causing in Florida. She said the warm climate is beneficial for animals that don’t belong here and that displace or kill native wildlife.

Tegus, for example, are a troublesome lizard in several areas, including Hillsborough County, and are known to eat alligator eggs and compete with gopher turtles for burrows. Green iguanas undermine roads by digging in South Florida and devour homeowners’ plants.

The reptile trade can be worth up to $ 200 million a year in Florida, according to Tucker, but the species affected by the rule are part of a market that includes thousands of animals. She said regulators are aware of about 120 licensees statewide who have inventories of tegus or iguanas and a few dozen dealers who sell reptiles such as the listed snakes.

We’ll provide you with the latest news and information you need to know every weekday morning.

You are all registered!

Want more of our free weekly newsletters delivered to your inbox? Let’s get started.

Explore all your options

The Fish and Wildlife Conservation Commission spends more than $ 8 million a year to manage invasive species, Tucker said, including nearly $ 1 million for the Argentine black-and-white tegu.

Critics questioned the accuracy of the agency’s financial assessments and accused Tucker of “sensationalizing.” Cutting back on wildlife trade, especially key lizards such as tegus and iguanas, they said, will affect related operations, including food suppliers and shipping companies.

Miranda Hill, owner of a reptile business in Daytona Beach, said last year that she bought more than $ 12,000 of exotic animals, paying $ 50 or $ 100 in shipping costs with each ordered.

“No one is saying these wild animals are not a problem,” she said.

Several callers said they would accept tighter regulations or tighter licensing policies, but that an outright ban was government abuse. The new rule, they said, does nothing to reduce current wildlife populations while isolating cautious breeders and hobbyists who could help the state capture problem snakes and lizards.

“You are creating a rule that creates criminals out of law-abiding citizens,” said Anthony Green, owner of Anthony’s Exotic Rescues in Tampa. Some opponents have predicted an increase in black market transactions.

Chris Cannarozzi, who said he runs a reticulated python breeding operation in Gainesville, described how the new rules could threaten a career that has taken decades to build.

“If this ban passes, everything I worked for will be lost,” he said. “Not every invasive animal contemplated will turn into this Burmese python situation.”

Related: Two women from St. Petersburg enjoy hunting pythons in the Everglades. We went with them.

Proponents countered that it made little sense for Florida to spend money catching and killing animals that people are then allowed to keep and buy as pets.

Take the iguanas, said Kate MacFall of the Humane Society: “If the owners regularly tried to kill these lizards, sometimes without success, their neighbor can buy one for a small fee.

Pedro Ramos, director of the Everglades and Dry Tortugas National Parks, said billions of dollars in taxes are being spent to restore habitats in South Florida, but that investment will be wasted if Burmese pythons continue to devastate deer, raccoons and other native wildlife.

“We’re not going to do it for a bunch of weeds and animals that don’t belong here to begin with,” Ramos said. “This alien problem may well be – and I don’t think I’m exaggerating in saying – the problem of our time.”