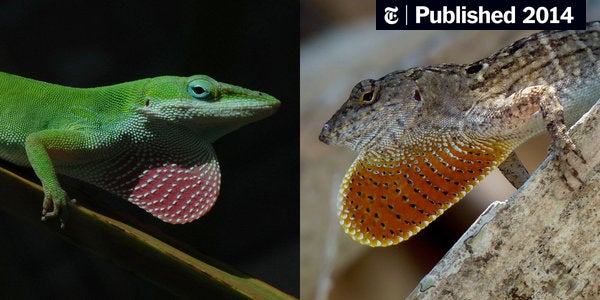 Faced with competition from an invasive species, a type of Florida lizard took just 20 generations – about 15 years – to develop feet better suited for climbing trees, according to a new study.

Biologists have long believed that evolution could occur rapidly in some species when faced with sudden and intense competition. In 1995, as part of an independent study, researchers introduced an alien species of brown anole lizards to three islands off Florida that were already home to green anole lizards. Green lizards have been known to move to higher perches after an invasion of brown lizards.

To test the rapid evolution theory, the researchers returned to the islands 15 years later and examined the feet of the green lizards (which had, as expected, moved to higher perches). They found that the lizards had developed larger, stickier toes, a characteristic not shared by green lizards on nearby islands that had not been populated by brown lizards.

“First, we saw the behavioral response,” said Yoel Stuart, a University of Texas biologist and lead author of the study. “And when we compared anoles to islands without invaders, we saw there was this evolutionary response as well.”

The ability to evolve rapidly could be a boon for species threatened by climate change, suggested the researchers, who published their study in the journal Science. Other species that have shown an ability to do so include Darwin’s finches in the Galápagos Islands, which developed smaller beaks just 22 years after a competitive species arrived, according to a princeton study from 2006. DOUGLAS QUENQUA