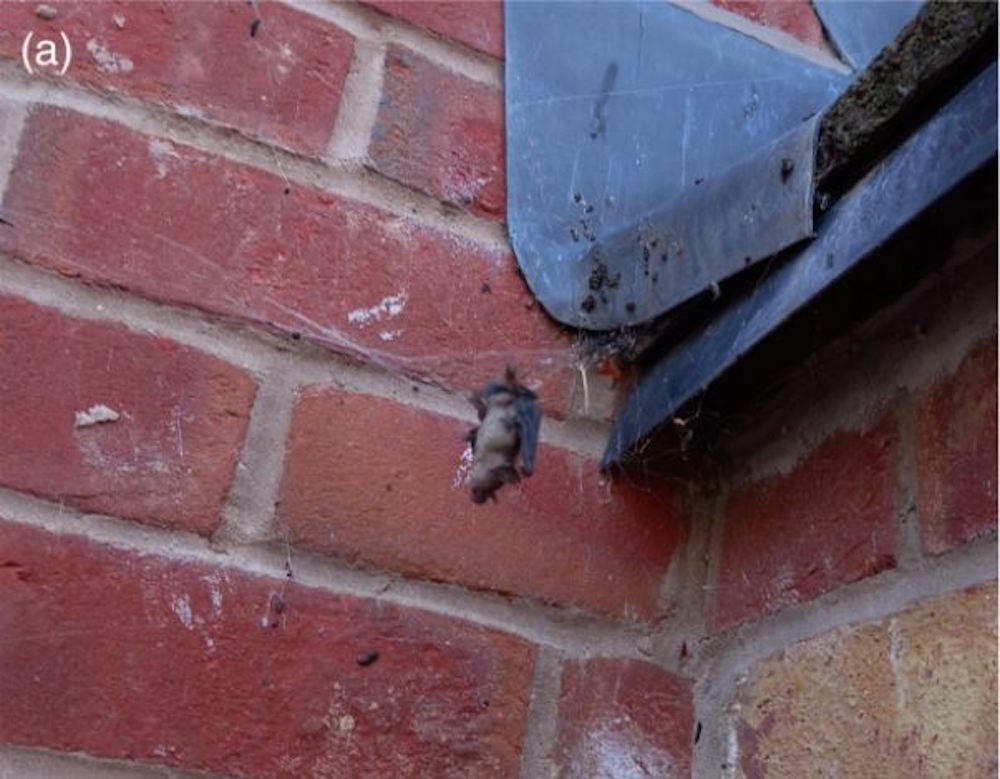 Spider-Man and Batman exist in different comic book universes, so it’s unlikely they’ll ever cross paths, outside of the occasional crossover event. In the real world, however, their animal counterparts sometimes inhabit the same spaces, and despite the drastic difference in size, in a fight the spider wins.

At least, that’s how things turned out in the attic of a house in Shropshire, England. Wildlife artist Ben Waddams has a living bat nest in his attic and noticed a lone spider had built a web just below the entrance to the roost. At first glance this doesn’t seem like a problem, bats are relatively large and not the typical prey of a spider. So, scientists were surprised to find the spider capturing and feeding on bats.

John Dunbar of the Venom Systems & Proteomics Lab at the National University of Ireland in Galway and his colleagues investigated the unusual interaction. Their findings were published in the journal Ecosphere.

The spider was identified as a false noble widow and the bats were one of two types of Pipestrelle, protected species in the region. This is the first documented case of a false widowhood feeding on a mammal anywhere in the world.

Due to the location of the web, adjacent to the entrance to the roost, it appears that the bats got caught in the web as they attempted to return to the roost. Pipestrelle bats may be more susceptible to being caught in webbing than other species, due to the frequencies they use for echolocation. High-frequency echolocation calls can ping spider silk, but pipestrelle bat calls are between 36 and 72 kHz and may not be well suited for identifying the presence of webs.

“Bats that echolocate at frequencies above about 36 to 72 kHz can better detect cobwebs and allow them to avoid colliding with them,” Dunbar told SYFY WIRE.

False widows, on the other hand, are well suited for capturing large prey. They belong to the Theridiidae family, the same family that true black widow spiders belong to, which is responsible for 34% of mammal predation by spiders. In addition, their web is particularly strong compared to other spider species and is more than capable of entangling relatively large prey. Once captured, the spiders hoist their prey up and suspend it above the ground before wrapping it in silk and paralyzing it with neurotoxic venom.

“Sightings of the Noble False Widow spider previously feeding on a lizard in Ireland and other much smaller species of false widows preying on lizards and snakes, it seems reasonable to assume that similar events may have occur but have gone unnoticed. Given the continued expansion of range and density globally, we should expect to see an increase in these occurrences,” Dunbar said.

Waddams observed the spider capture two bats, one after another, on two consecutive evenings. The first was a pup that might have had the worst luck in bat history. Given its age, the scientists involved in the article believe it may have been the first night the bat flew from the roost. By the time it was observed, its limbs were completely immobilized and its shriveled, discolored body indicated that the spider had fed on it. The next morning, the pup had been taken down from the web.

It is not believed that the spider disconnected it or that there was secondary predation. Instead, it was likely thrown off the web by the beat of the second captured bat. A new bat was found in the web on the second night, this time an adult. The adult was still alive and there was no indication that the spider had ever attempted to feed. The decision was made to release the bat from the web. He was placed on the wall near the entrance to the roost and eventually returned home.

“Although this is the first instance of this species feeding on mammals, it is not unusual for false widow spiders and true black widow spider species to subdue small vertebrates hundreds of times their size,” said Dunbar. “In the past, they have been documented feeding on mice, rats, voles, shrews, frogs, lizards and snakes.”

This hunting behavior might not be of concern were it not for the nature of both species. As mentioned earlier, pipestrelle bats are a protected species and false widow bats are invasive. Originating in the Macaronesian archipelagos located several thousand kilometers from England, they have since spread not only throughout Europe but also to Asia and North and South America.

The full impact of their spread on the ecosystem has not yet been studied, but the predation of these protected species does not bode well. Scientists are considering plans to mitigate the negative impact on global ecosystems.

The battle between the spider and the bat could make for an exciting comic book, but in the real world, it’s added pressure on an already challenged species. Without intervention, these spiders could be responsible for a real dark night for bats.

Tuataras: the discovery of fossils reveals secrets about the mysterious reptile