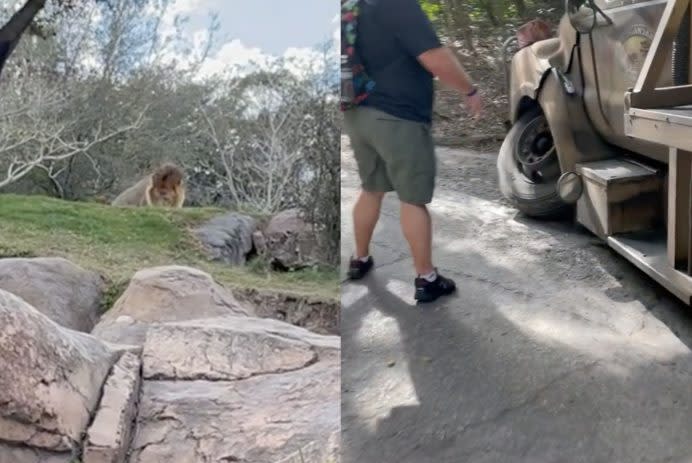 A group of Disney Guests had an unexpected experience while venturing on Kilimanjaro Safari earlier this week.

The Kilimanjaro Safari is an exclusive attraction at Disney’s Animal Kingdom at Walt Disney World in Florida. Guests take an open-air vehicle for a guided tour of Harambe Wildlife Sanctuary, home to 34 free-ranging species on the 110 acres of land. Animals include crocodiles, wildebeest, lions, elephants, hippos, and black rhinos.

Watch this Brooklyn bedroom go from dull to fabulous in a day:

The excursion, according to the Disney site, lasts about 18 minutes. But a TikToker captured the moment a group of tourists stopped for over 40 minutes.

TikTok user Katelin (@purely_katelin) filmed the visit being mesmerized by a lion strolling a few feet from the vehicle. But the sense of awe and wonder began to fade after the group got stuck in the lion enclosure.

“30 minutes later…still stuck in the lion enclosure,” Katelin recounted. “Hasn’t moved, nobody – that lady driving has no idea why.”

In a follow-up video, Katelin explained, “Here’s the thing: they evacuate us with a ladder and we have to walk the rest of the way.”

Visitors – which include families with young children, as Katelin showed some mothers carrying their children – had to walk through metal chains and a cattle grid, which are methods used to keep animals from wandering into other enclosures.

The group then figured out what had caused the evacuation – the front wheel of a vehicle had become completely bent and broken, blocking the path used for all tours.

As for Disney’s compensation, Katelin said in a comment that Disney gave guests “ONE Flash Pass to Animal Kingdom,” which grants access to separate entry to attractions and rides with shorter lines.

“What made it so miserable was that there were toddlers with us, it was in the sun and no one was telling us what was going on,” Katelin concluded. “Can you imagine that? It’s ridiculous.”

According to reviewers, getting stuck on safari didn’t seem too uncommon.

“We were stuck for about 15 minutes because the giraffes weren’t moving,” one person said. “It was cute but the sun was hitting us directly.”

“In my experience it’s usually a giraffe jam,” another joked.

“We were stuck for 20 minutes because rhinos were on the road,” another added. “Then a truck came and dropped off food to move them.”

See this tiny New York City apartment get an impressive makeover in a day on a $1,000 budget:

The post Disney guest shares a ‘ridiculous’ experience stuck in Animal Kingdom’s lion enclosure appeared first on In The Know.

If you want soft, glowing skin when you wake up, apply this nourishing face oil before bed (you can buy it at Walmart!)