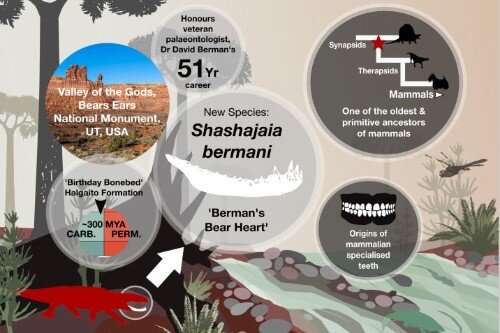 A recently discovered extinct species of reptile has shed light on how our earliest ancestors became top predators by changing their teeth in response to environmental instability around 300 million years ago.

In conclusions published in Royal Society Open Science, researchers at the University of Bristol have found that this evolutionary adaptation laid the foundation for the incisor, canine and molar teeth that all mammals, including humans, have today.

Shashajaia is one of the most primitive members of a group called the Sphenacodontoidea, which includes the famous sail-backed Dimetrodon and mammal-like reptiles known as therapsids, which eventually evolved into mammals. It is remarkable for its age and anatomy, possessing a very unique set of teeth that sets it apart from other synapsids – that is, the animal line to which mammals belong – of the time.

Dr Suresh Singh from the School of Earth Sciences explained: “Teeth show a clear differentiation in shape between the front and back of the jaw, organized into distinct regions. It is the basic precursor of what mammals have today: incisors and canines in the front, with molars in the back.This is the earliest record of such teeth in our evolutionary tree.

Shashajaia’s new dentition demonstrates that large, differentiated canine-like teeth were present in synapsids during the late Carboniferous, an era famous for giant insects and the global rainforests that produced much of our coal deposits .

By analytically comparing the dental variation observed at Shashajaia with other synapsids, the study suggests that distinctive and specialized teeth likely emerged in our synapsid ancestors as a predatory adaptation to help them catch prey at a time when the global climate change about 300 million years ago once saw -The predominant Carboniferous wetlands are replaced by more arid seasonal environments. These new, more changeable conditions resulted in a shift in prey availability and diversity.

Lead author Dr Adam Huttenlocker of the University of Southern California said: “Canine-like teeth in small sphenacodonts like Shashajaia may have facilitated rapid raptor biting in riverine habitats where a mixture of Terrestrial and semi-aquatic prey could be found in abundance.

The new reptile is one of the oldest synapsids. It was named “Shashajaia bermani”, which translates to Berman’s Bear Heart, to honor the 51-year career of veteran paleontologist Dr. David Berman of the Carnegie Museum of Natural History, as well as the local Navajo people of discovery site inside Bears Ears National Monument, Utah.

Dr Singh said: “The study is a testament to Dr Berman who originally discovered the fossil site in 1989, and his decades of work on synapsids and other early tetrapods from the Bears Ears region of the United States. ‘Utah, who helped substantiate the Bears Ears National Monument in 2016.’

The site is located in an area known as the Valley of the Gods and is of great importance to paleontologists.

“The monument archives the final stages of the Upper Paleozoic Ice Age, so understanding the changes in its fossil assemblages over time will illuminate how climate change can drastically alter ecosystems in deep time, as well as in the present” , added Dr. Huttenlocker. .

How canines of carnivorous mammals evolved to be super killers

Provided by University of Bristol

Galleries: a new exhibition explores the intimate relationship between art and anatomy