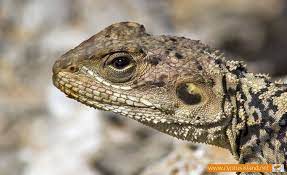 Discovery of a new endemic reptile species in Cyprus

According to a UCy press release, the lizard known as “kοurkoutas” in Cyprus is a distinct species (Laudakia cypriaca), found only in Cyprus and now part of the important biodiversity of the country with the Cypriot snake (Hierophis cypriensis) and the Troodos lizard (Phoenicolacerta troodica).

It was thought that these lizards corresponded to a species widely distributed throughout the eastern Mediterranean, however, as indicated, the study of genetic material (DNA), which was carried out at the Laboratory of Ecology and Biodiversity of the Department of Biological Sciences of the University of Cyprus, in collaboration with the Natural History Museum of Crete of the University of Crete and researchers from Austria, Germany and Turkey, have shown that the Cyprus lizard corresponds to a separate species, also revealing the existence of two other species, with the first (Laudakia vulgaris) extending to neighboring countries in the Near East (Syria, Jordan, Israel and Egypt) and the second (Laudakia stellio) restricted to Greece and the Turkey.

Finally, it should be noted that the results of the study were published in the eminent scientific journal Zoological Journal of the Linnean Society and provided important data on the evolution of these animals in the eastern Mediterranean, such as the estimate periods of time during which each of their various lineages evolved, according to which it appears that the kourkoutas diversified in Cyprus around 2.5 million years ago at the start of the “ice age”, which brought the coasts of Cyprus from those of Syria and Israel.

6 weirdest hearts in the animal kingdom