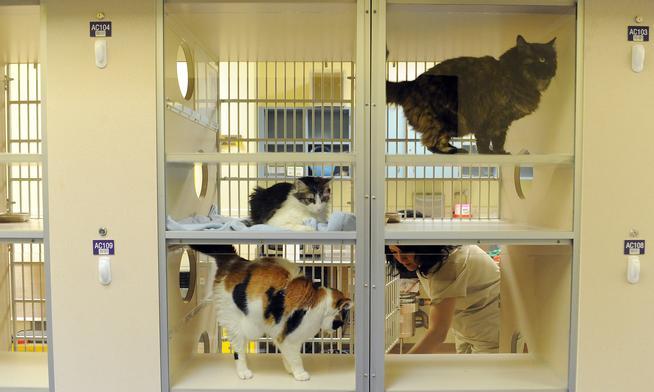 The Denver Animal Shelter has too many animals in its care — and now the shelter is offering big discounts to Denver residents who might be open to adding a new family member.

Emerging from the height of COVID-19 lockdowns and low numbers of pets admitted, the shelter began to see an increase in intake around September 2021, said accommodation service manager Meghan Dillmore, and since then numbers have only increased.

“We’re still fuller than I’ve ever seen us, even with lots of animals in foster care,” Dillmore said.

To help with the surge, DAS is working with the Clear the Shelters campaign and halving adoption prices through August. Regular adoption prices at DAS range from $15 for small animals to $170 for puppies and include neutering surgery, microchipping, vaccinations and a one-year license.

It’s not just dogs and cats either. The shelter has seen a 175% increase in small mammals such as mice, guinea pigs, rabbits and hamsters, Dillmore said, and they even have bearded dragons and leopard geckos.

The flood of animals released to the shelter is due to a variety of reasons, Dillmore said. For small mammals, it seemed like more people were buying them for their children during the closures, but they are being brought to the shelter since those children are now returning to class.

For dogs and cats, however, they didn’t see as much consensus on why more should be given up. Some may be due to lifestyle changes after the first pandemic lockdowns, new jobs that take people out of town, or landlords who can no longer afford them.

But the increase in admission levels has also coincided with a decrease in the number of adopted animals.

“We don’t adopt as many as we normally do,” Dillmore said.

In addition to adopting, Denver-area residents can help DAS and other shelters by volunteering, donating items or money, and promoting. The shelter has streamlined its foster program to allow more animals to be placed in homes, and people can even take dogs out for day trips or short periods of time.

“We take very good care of our animals here, but that being said, it’s still a very stressful place,” Dillmore said. “So even taking them out for a night or a weekend, or a few days; if you want to hike, take a dog with you.”

Dillmore has encouraged people to consider adopting animals during the Clear the Shelters campaign if they can, and the shelter has experienced staff who can help anyone find the right animal – whether they’re be it a dog, cat, rabbit or lizard – to suit their lifestyle.

The shelter has a list of adoptable pets on its website, but Dillmore said the list of pets in need of homes is much longer, and many of those animals are waiting in line to be found. authorized by a veterinarian before they can be made adoptable.

Adoptions made during this special event go through a standard adoption process to ensure pets and people find the right person.

Satire | You can’t win against a reptile