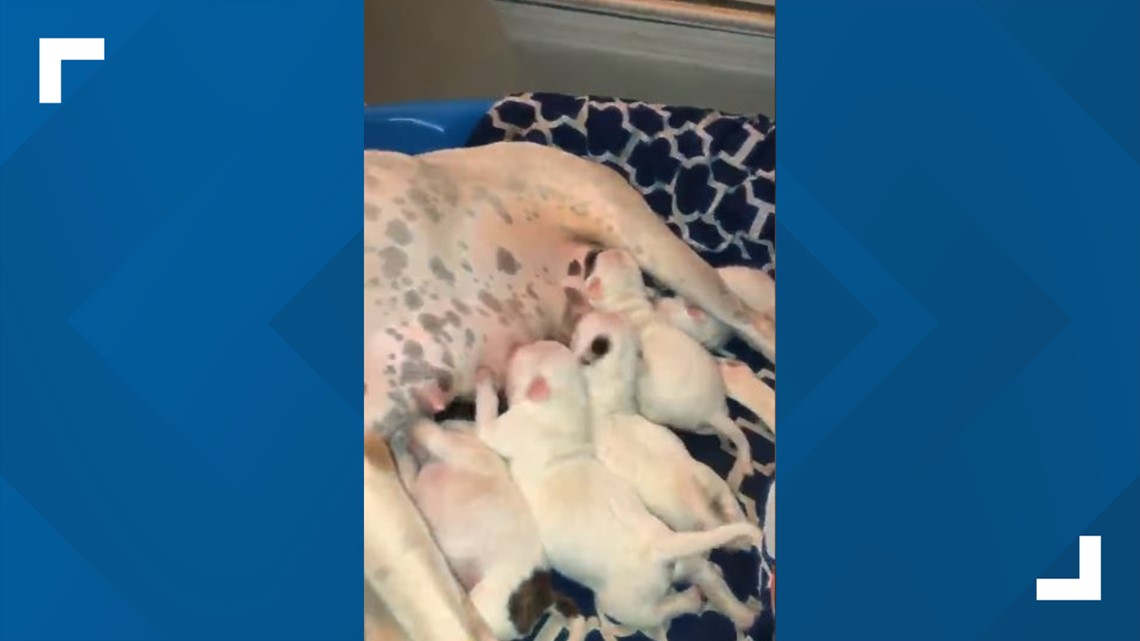 The mother had given birth overnight as severe storms moved through parts of Georgia.

CLAYTON COUNTY, Ga. – A litter of puppies and their mother are on the mend in Clayton County after a chilling welcome to the world.

The pregnant mother-of-seven had just given birth last week at her landlord’s Morrow home in an unsafe location, police said. The owner called for help after realizing the dog had given birth overnight and dug an area under the concrete patio which was quickly filling with water, according to an animal control officer.

The owner was frantic and couldn’t reach the dogs under the concrete slab, an even more difficult task to do as inclement weather affected parts of Georgia.

Officers rushed to the Planters Court home on April 5. They quickly realized that the mother had dug herself a rather deep cave, leaving the puppies in a muddy and dangerous situation.

That’s when Clayton County police said their animal control officer got down to the level of the dogs, lying in a mound of mud during heavy rains to try to reach the animals . After failing, the officer opted to use a pole, handing each dog to the accompanying officer as she took them out.

Working quickly, animal control officers fished out as many animals from under the patio, examined them for medical attention, dried them off, and made sure the owner let them into the house. Officers were able to rescue six of the seven puppies and their mother. At that time, the puppies were barely a day old, according to the police department.

“They make personal sacrifices to ensure the animals in this county are safe from harm every day,” the department said. “Not to mention the fact that they are ready to do the job! »

#Update: These gorgeous puppies are on the mend after their dramatic entry into the world. Once again, thank you to both of you, Animal Control Officer (ACO) Mathis and ACO Billings for saving these beautiful puppies. #ccpd Clayton County Animal Control

Posted by the Clayton County Police Department on Tuesday, April 12, 2022

The Clayton County Police Department released an update on the now week-old puppies, showing them feeding and cuddling together.

“These gorgeous puppies are on the mend after their dramatic entry into the world,” the department said. “Once again, thank you to both of you, Animal Control Officer (ACO) Mathis and ACO Billings for saving these beautiful puppies.”