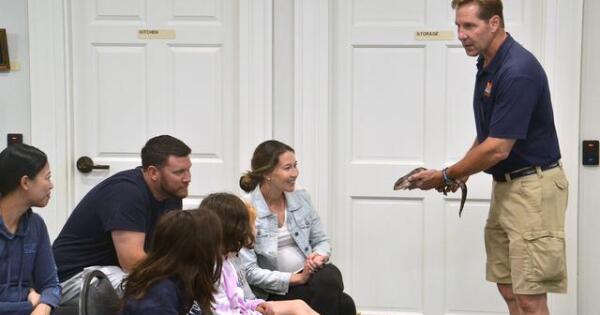 In honor of Connecticut Beardsley Zoo’s 100th anniversary, it expanded its Zoomobile program, which visited the CH Booth Library on September 10.

Jim Knox, curator of education at Beardsley Zoo, brought a variety of animal ambassadors for attendees to learn about. He also explained how families can help animals at the zoo and in the wild.

Knox began his presentation by asking how many people had been to Beardsley Zoo before and about half the group raised their hands excitedly.

He explained that the animals he brought them to see today “came from all over the world” and were “specially chosen based on their temperament”.

Almost all of them were originally someone’s exotic pet that didn’t work out, and the zoo stepped in to provide care and a home for them.

The first animal he introduced was Winston, which is a blue-tongued skink, which is a type of lizard. Knox shared that Winston has worked at Beardsley Zoo for about 14 years.

Lizards like him live in Australia and New Guinea, and for their survival they try to imitate the Death Adder snake from the forests there to fool predators.

Knox pointed out that Winston often sticks out his blue tongue because it helps him smell what’s in the air, so his brain can tell where to find food.

Another animal that participants got a closer look at was a yellow map turtle named Galileo, which has markings on it that look like topography on a map.

Knox explained that Galileo was someone’s pet and came to the zoo about 18 years ago.

He said that while turtles “can make great pets,” some can live around 50 to 60 years and are a big commitment. If anyone is interested in having a turtle as a pet, he encouraged them to contact them or contact a representative from Beardsley Zoo for advice.

Knox let everyone know that while most assume turtles are slow, they can gain more energy and move faster when warming their bodies in the sun.

“The sun is like their battery charger,” he said. If someone driving sees a turtle in the wild trying to cross a road, Knox recommends pulling over and turning on the car’s hazard lights to protect them from traffic as they cross.

A popular ambassador animal that Knox showed the group at the library was Leonidas the eastern king snake.

He shared that he “has a lot of respect for this guy” because in the wild this species can eat other snakes, including rattlesnakes.

Knox explained that this ability is called an “adaptation” because it allows him to obtain unique prey.

With each animal, he walked around the room to show audience members and answer any questions they had.

Knox said The Newtown Bee“My favorite part of delivering our Zoomobile programs is meeting people from the community who share my thirst for wildlife knowledge as well as a passion for wildlife conservation.”

Upcoming events at the zoo

Beardsley Zoo recently announced its schedule for September to December 2022. This month be sure to check out:

“Enjoy the music created by one of the most influential bands of our time. You’ll hear plenty of Fab Four hits, B-sides and deep tracks, all performed with attention to detail reproducing their tight harmonies, sophisticated guitar work and solid backbeat. In short, this signature sound of the Beatles! announced the zoo in a recent press release.

“Come see our adorable red panda Berry in his home, the Natt Family Red Panda Habitat. The zoo’s educational staff will be giving talks about this adorable member of the zoo family. Learn about red pandas and help us create as many Red Panda Rangers as possible in a single day.What is a Red Panda Ranger?A Red Panda Ranger is a special title given to children who help raise awareness of red pandas.Red pandas have been identified as a species beacon and an indicator of ecological health,” the zoo detailed.

*September 21, 7 p.m., Evening Lecture Series: The Loons Tell Us About a Changing Arctic

“Join Tamara Zeller of the United States Fish and Wildlife Service for a series of youth-produced short films about loon research in Alaska and scientists’ collaborative efforts to learn more about these iconic species. The films will address migration loons, habitat changes and the challenges facing loons in a changing arctic climate.We will also show a film about the loons of Lake Connors in Anchorage and the story behind efforts to conserve them. presented via Zoom. The cost is $10 for each talk, with a reduced cost of $50 if you register for all seven talks,” the press release reads.

The Beardsley Connecticut Zoo is located at 1875 Noble Avenue, Bridgeport, Connecticut, and parking at the zoo is free.

To learn more about Beardsley Zoo and its animals, visit beardsleyzoo.org.

Journalist Alissa Silber can be reached at [email protected]

Beardsley Zoo Curator of Education Jim Knox holds a blue-tongued skink named Winston for all to see during the zoomobile program at the CH Booth Library on Saturday September 10. —Bee Photos, Silber

Galileo, a yellow map turtle, was once someone’s pet before coming to Beardsley Zoo 18 years ago for treatment. Today, he is an animal ambassador for the zoo’s education programs.

Jim Knox, Curator of Education at Beardsley Zoo, shows off Leonidas the Eastern King Snake to the group of Zoomobile participants at the CH Booth Library.