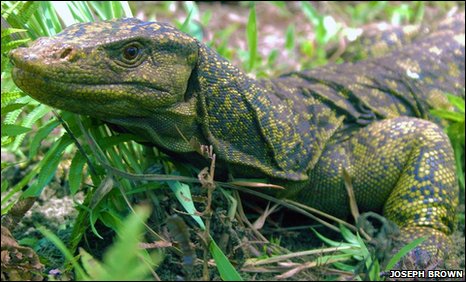 Zoom on the giant Varanus bitatawa

A new species of giant lizard has been discovered in the Philippines.

The 2m long reptile is a monitor lizard, the group to which the longest and largest lizards in the world belong.

The monitor lizard, described as spectacular by the scientists who found it, lives in the forests covering the Sierra Madre mountains in the north of the country.

The striking reptile has shiny yellow, blue and green skin and survives solely on a diet of fruit, but so far has escaped the eyes of biologists.

“It’s an incredible animal,” says Dr. Rafe Brown, one of the scientists who describes the new lizard in the journal Biology Letters.

In the paper, the researchers describe how rare it is to find such a large land animal new to science.

The discovery of the lizard, they say, is of similar importance to two other large species of so-called “mega-fauna” discovered in recent years: the kipunji (Rungwecebus kipunji), a new genus of monkey found in Africa, and the saola, a Vietnamese forest bovid (Pseudoryx nghetinhensis).

The giant lizard is actually well known to the residents of the Agta and Ilongot tribes living in the northern forests of the island of Luzon.

Tribe members regularly hunt the lizard for its meat, a vital source of protein.

Yet scientists were unaware of its existence.

Within these specimens, they identified the new species based on its body size, scales, coloration and DNA.

With a main body length approaching 1m, with an additional 1m long tail, the lizard has dark skin covered in golden yellow spots and blotches.

Its legs are mainly yellow and its tail is striped with black and yellow.

In some images, the animal also appears to have green or blue scales.

The new species, called Varanus bitatawais believed to survive on a diet of fruit, making it one of three species of fruit-eating monitor lizards in the world.

Monitor lizards include the world’s most massive lizard, the Komodo dragon (V. komodoensis), which can reach up to 3 m in length and weigh up to 90 kg.

Although not as massive, other species of monitor lizards, such as the crocodile monitor or the Salvadori monitor (Varanus salvadorii) from New Guinea, can also reach similar lengths.

Why the massive new lizard hasn’t been discovered by scientists until now is a mystery, especially since many biologists work in the northern Philippines.

Researchers say this may be because the lizard is naturally reclusive, being a very secretive animal that never leaves the forest or crosses the countryside.

It may also be because few scientific expeditions have characterized the reptiles living in the forests of the Sierra Madre.

The new species of monitor lizard lives at least 150 km from its closest relative, another lizard called V.olivaceuswhich also lives in trees and eats fruit.

No need for sex: all-female species of lizards cross their chromosomes to make babies