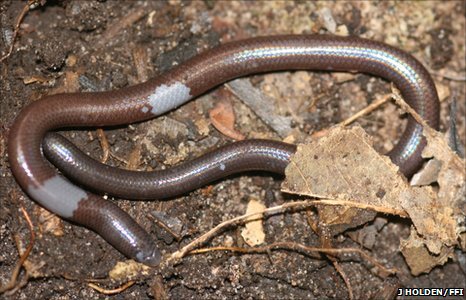 Creature looks like a worm or snake, but is actually a legless lizard

Scientists have discovered a new species of lizard in Cambodia that has neither eyes nor legs.

Neang Thy, a zoologist with Cambodia’s Ministry of Environment and Fauna & Flora International (FFI), found the worm-like creature while exploring the Cardamom Mountains.

He noticed this when he knocked over a log and managed to capture and examine it.

Dr Thy and his colleagues have now confirmed that this is a species new to science.

They published their finding in the journal Zootaxa.

“At first I thought it was a common species,” said Neang, who has studied reptiles and amphibians in Cambodia for nearly a decade.

But he soon realized it was something he had never seen before.

The species has been named the Dalai Mountain Blind Lizard (Dibamus dalaiensis), after the mountain on which it was found.

Dr Jenny Daltry, senior biologist at FFI, said it took almost a year to make sure the strange animal was indeed a new species.

“They had to go through all the scientific descriptions of all the other species… and look at the museum specimens,” she told BBC News.

“What’s really exciting about this is that it’s the first time a Cambodian national has discovered a new species, put together all the scientific evidence and published the discovery.”

The blind reptile looks like a snake, but it’s actually a lizard that evolved to live underground – losing its legs to allow it to wiggle its way through the ground.

“There are actually a lot of legless lizards – like the slow worm in the UK,” explained Dr Daltry.

Also, unlike snakes, this creature does not have a forked tongue.

“Most snakes have only one lung, while lizards have two.

“Also, most lizards are able to blink and snakes cannot,” Dr. Daltry continued. “Although this new [underground] the lizard has no eyes at all.”