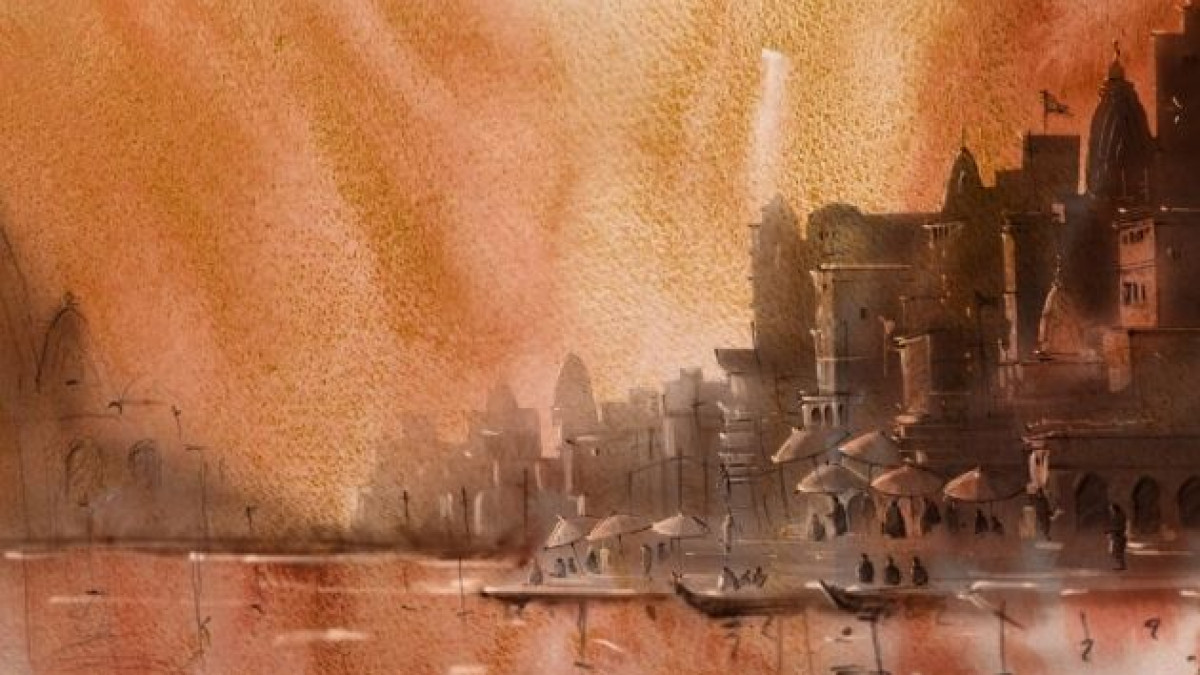 Reimagining the myths and mythologies of the city of Benares, the poem “Anatomy of Baranassey” is a historical and fictional journey from the Benares riots of 1809 to the schismatic electoral uprisings of contemporary India. Written in a whimsical and reverential poetic language, it is also a musical montage of memories, individual and collective. And it reminds us that Benares was never a hegemonic Hindu city – Muslims, Buddhists and several heterodox sects and communities also consider it a holy place. Although the city skyline has become brighter and more opulent, the essential ethos of Indian civilization – plurality, diversity and syncretic traditions – continues to flourish in the eternal abode of Lord Shiva, symbolizing the expanse and depth of the spirit of humanity. and harmony in Benares since time immemorial!

Bathed in sun and salt,
draped in a white loincloth,
it enters the perineum
of the sanctum sanctorum of
the buffalo-horned masked ascetic
God. Lions, sitting cross-legged in the
lotus posture, growling in anticipation of
the procession of the voluptuous
cheerleaders with high nose bridges,
slim waist, wide hips.
It was the third day of rainbow-
lust in the original Vedas.
Saturn was in the sixth house. wives
cooked lost-hearted sages
mutton in clay jugs, washed
secretly the members of their lovers with
the flavor of their grilled meats
body, and party in N and S
positions on the deck of the peacock boat
in the twin rivers of Vara and Nashi
From the medieval mosque to the apsidal chaityas,
aghoris in twenty-one meter funeral robes,
flogged by lepers, pimps and smugglers,
flock to the gates of the Department of Religious
Tolerance and piety for free passes
to the sanctuaries of nomadic gods. Parrots-astrologers
and fugitive Khalistan terrorists rely on
the stairs of the old houses of prostitutes
in Assi Alley to discuss fluctuating fortunes
human sacrifices and mustard harvest.
Driven by old favors,
she bends geometrically and rubs
vermilion paste on the head of the black
lingam, rocking him gently with his lizard lips
fully fledged with spices imported from
Mecca, bursting like a victorious native army.
The aging god in love, lying on a bed of
arrows, wakes up from an opiate sleep
in the camphor clouds of sacred ambitions –
trident, drum, conch and lotus in his hands.
The auspicious
breaks free at the first blow of revelation,
measure the rhymes of salvation in metrical poems,
remembers how, on a damp December morning, he
beheaded Brahma on the river bank
for smuggling Mongol warriors into the city.
He feels relieved to
daily chores to eat everyone
sin and curse the seven wise men for
exalting the virtues of celibacy.

The fourteenth night of
Waning moon, she’s rising
after endless days
joys of first night marriage with stone gods
(which we do not know, nor hear, nor exist any
more), crosses the ghats filled with
peacock feathers, reclining sacrifices
three-eyed Brahman rice ball body
ghosts, and bares her happiness with the
evening sacred prayer in the river.
We were warned by the famous local
bard, “Half the town lives in the water;
the other half is a corpse
(shava). “We have to admit that we
alarmed by this unusual sight.
There was no government
neither religion nor any ideology.
Nothing was forbidden,
nothing taboo, and civilization
existed in simple geographic coordinates.
It’s only late at night
that we carried out the celestial gossip-
the merchant’s warning was right
A new republic had arisen on the holy
town. With black ink on the index finger,
unbaptized Hindus, primetime anarchists,
part-time lay people and the famous Internet
Baba had assembled
on the banks of the polluted Himalayan river,
and promised to clean up the old accumulated dirt.
The great chief, in a golden Afghan jacket,
limited edition watch and Deccan rubber shoes,
did not tweet Solomon’s songs, but spat lies,
more lies, until they become cobalt truth. His
the barbarian partisans came with
3D banners, on the back of
Seahorses captured from California
valley, leveled the black pillar and
sang hot Bhojpuri songs:
Har Har Mahadev, Ghar Ghar Mahadev!

In a fantastic facade of ritual picnic,
Nagas on the left and Gosains on the right
who often played, played and relieved
themselves in the overflowing landfill of the
narrow streets of the city,
attacked the memory bazaar momins.
We were told that they were unemployed migrants.
They were carders, spinners, spinners,
dyers. They were armed with looms, spindles,
and seventy-two additional threads.
Rumor had it: James Prinsep, Tavernier,
and Sri Sri 1008 Dandapani were in the
crowd when a mother cow was shot
and the Emperor’s Mosque destroyed.
As soon as radio jockeys Tiwariji and Daddan
Mia announced “Mandir-masjid waheen banegi,”
all flamingos and dark skinned slaves
fled the city. Intrigued, we saw Brahamins,
Sheikhs, Jain priests plundering pink feathers
designer shops.


Blood dripping blood, mostly red,
without past austerities, reversed in
drawings of dysentery all over the mathematical world
tiles on the promenade of the burial ghats. With
web wings, cut bodies
floated in the air of hate, and
blossomed like an untimely old Scotsman
roses. Seeing this, Kabir began to cry,
Sadho re, yeh murdon ka gaon
yeh murdon ka gaon…
Peer mare, paigambar mari hain
mar gaye zinda jogi
Raja mari hain, parja mari hain
mar gaye baid aur rogi
(Remember this is a village of the dead.
The saints are dead, dead are the living beggars.
The ruler is dead, dead are the governed,
dead are the doctors and the patients.)
Everyone, including the junkies, broke their loom at Shiva’s.
city ​​and hid themselves in the ninety-nine epithets of Allah.
On the orders of the District Magistrate, Mr. Bird,
Our convoy shot male jesters and dancers to
disperse the marauding crowds and raging bulls.
After three days of carnage, we had lost an officer and three soldiers.
We buried them in their scarlet


(“Baranassrey’s Anatomy” as told by Major James Rennell” is the main poem in “Banaras and the Other” by Ashwani Kumar (Poetrywala, 2017). Ashwani Kumar is a poet, political scientist and professor at the Tata Institute of social sciences. Bombay.)