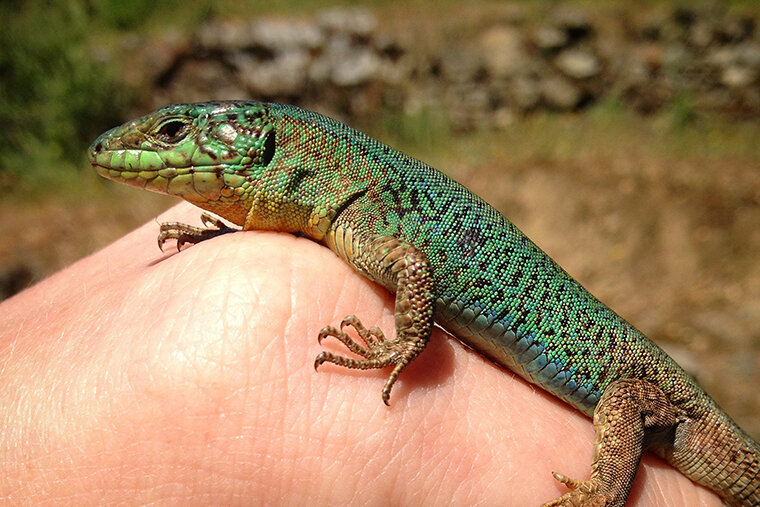 Moved in small groups to experimental islands, the lizards quickly and repeatedly evolved new chemical signals to communicate with each other. Safe from the risk of predators and the intent to attract potential mates, male lizards produce a new chemical calling card, according to new research from Washington University in St. Louis.

Studies of the evolution of animal signals typically focus on acoustic and visual cues, such as the complex chirping in a bird’s song or the brilliant flashes of color on fish scales. Chemical signals between animals are less obvious to humans and more technically complex to analyze. Much of the existing research on these signals has focused on insect pheromones relevant to certain agricultural applications.

But chemical signals are the oldest and most widespread mode of communication, ranging from bacteria to beavers. As such, they represent a valuable opportunity to decode how animals communicate and perceive the world around them, the researchers said.

“What we’ve found is that within species there’s significant variation in chemical cues depending on your context: who’s trying to eat you, who wants to mate with you, and who you’re trying to mate with. compete,” said Colin Donihue, a biology postdoctoral fellow in Arts & Sciences at Washington University in St. Louis and lead author of a new study published April 21 in the Journal of Animal Ecology.

Lizards and snakes gather chemical cues from their surroundings by waving their slender forked tongues, then process those signals using a well-developed sensory organ in the roof of their mouth.

Lizards deposit their encoded chemical messages in the secretions of specialized glands located on the inside of their thighs. Secretions are a waxy cocktail of lipid compounds that contain detailed information about the individual lizard that produced them.

In this study, researchers moved groups of eight male and 12 female Aegean wall lizards (Podarcis erhardii) from a single source population in Naxos, Greece, to five small islets devoid of predators. Under normal conditions, these lizards would face a number of native and non-native predators, including snakes, birds, and cats.

Free from predators on the small islets, lizard populations grew rapidly and competition for resources was fierce.

Each of the lizards moved was individually tagged so they could be identified when researchers returned to check on them. Over the next four years, scientists revisited the populations, tracking the fate of the displaced lizards and their offspring.

What they found was striking: On each of the predator-free islands, the lizards rapidly and repeatedly developed a new chemical “mixture” distinct from that of the lizards in the source population. The changes were apparent after only four generations.

For the first time, researchers believe they have demonstrated strong evidence that lizards can “put on a new cologne” based on their environment.

“Signals to attract mates are often visible to predators,” said Simon Baeckens, postdoctoral researcher at the University of Antwerp in Belgium and co-author of the new paper. “As such, sexual cues exhibit a trade-off between attractiveness and avoidance of detection. However, on these islands, there is no constraint on the evolution of highly visible and attractive cues.

“At the experimental islands, we found that the ‘signal richness’ of the lizard secretions was the highest, meaning the number of different compounds we could detect in the secretion was the highest,” Baeckens added. . “Our previous research suggests that this more elaborate signal could predict a man’s high quality.”

Donihue continued, “Animals have spent over a billion years developing a complex library of chemical communication. But we didn’t invent the technology to identify many of these chemicals until a century ago, and experiments to understand what these chemicals mean to animals in the wild have only just begun.

“We’ve discovered that animals’ chemical signals can change quickly and flexibly to adapt to new settings, but that’s only the beginning of understanding what lizards are telling each other.”