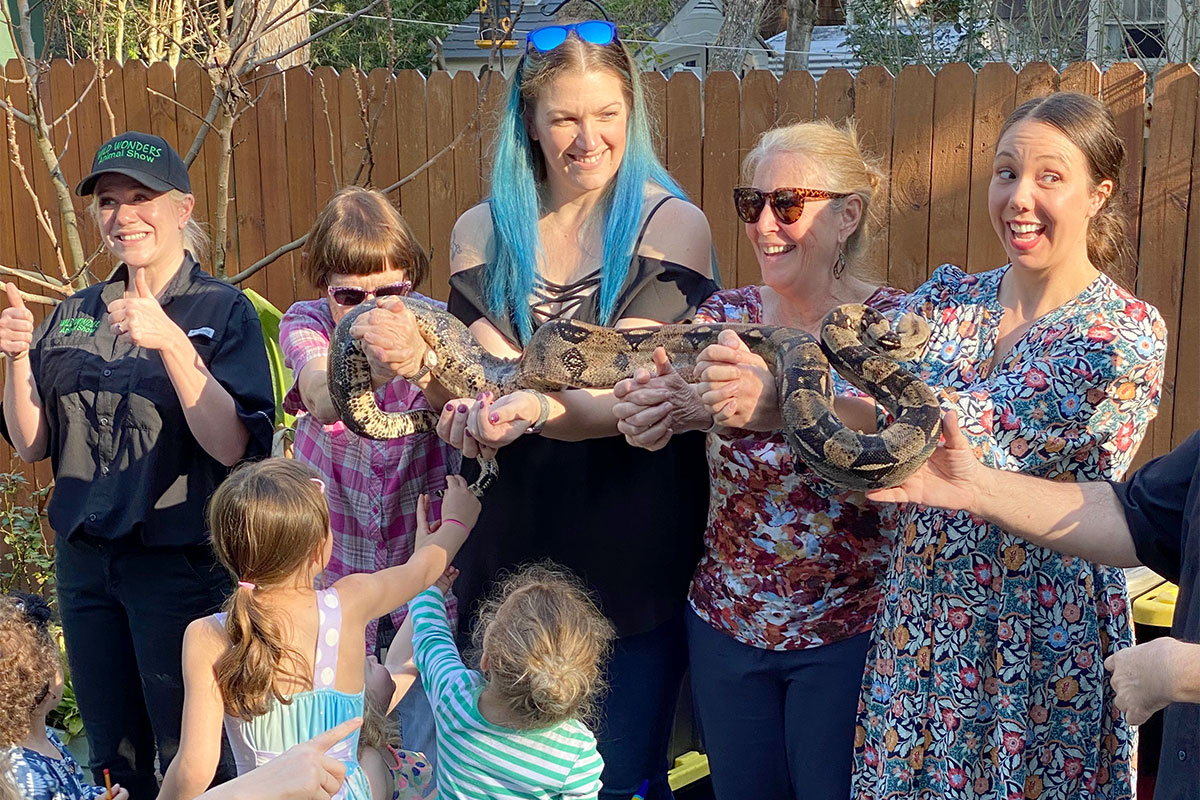 An excited group of restless kids of all ages, teens and adults, recently gathered on a Saturday morning under an outdoor pavilion at Dutton Island Preserve to see “Dinosaurs Among Us.” The “dinosaurs” were actually their modern-day descendants: all manner of reptiles, stars of a free educational program called the Wild Wonders Animal Show. The interactive, family-friendly program will be presented at Dutton Island Preserve four more times in May and June. It will also be presented free of charge in several public libraries in June and July.

Mike Rossi and his assistant, Stephanie Nelson, are teachers who want to introduce children to nature through safe and supervised interaction with live animals. Rossi said one of the reasons he runs these programs is because he knows some children may never have the chance to see or learn about these animals. The educational program with a purpose, mixes stories and music with fascinating facts and information about local native and invasive Florida reptile species, as well as exotic reptiles kept as pets.

Rossi and Nelson were surrounded by several sturdy, neatly covered pet crates, and mysterious, tightly sealed plastic containers ranging from tiny to large. Great care has been taken to avoid any accidental release of reptiles into the park: an important message from the program.

During the show, specially selected songs or movie themes introduced each animal to an audience of approximately 130 people. The music offered clever and entertaining clues about each animal’s personality or disposition that had the audience laughing before the reptile was even seen.

The program included a wide variety of turtles, snakes, lizards and a baby American alligator. As Rossi or Nelson carefully held the reptiles, there were opportunities to approach anything that could be touched or to take a closer look and take a photo. Next, each reptile’s story was told, including detailed facts about that animal, with time left for questions from the audience.

“We offer four different animal programs that include educational yet fun lessons, lots of animal information and interactive activities. Besides reptiles, other topics cover how animals use their important senses of smell, sight, hearing and touch to survive in the wild,” Rossi said. “We also discuss invasive species and how they affect Florida’s wildlife and environment. It is important to teach why we should never release a pet into the wild, which happens far too often. Pets released into the wild may suffer and die, unable to survive on their own, or they may breed and cause serious harm to native wildlife and the environment.

Mike Rossi has been interested in animals and wildlife, especially reptiles, since childhood. Because his mother was allergic to fur, he could never have a furry animal, but he could have reptiles. His favorites were turtles and when he became a teacher, every class he taught had a resident pet turtle. He also formed a student zoological society in his schools. Rossi’s goal has always been to teach the habits, behavior, care, and related environmental issues of native and exotic animals.

In 2002, Rossi started helping a friend put on educational animal shows. Eventually, he took over the programs when illness forced his friend’s retirement. 2022 is the tenth year for Rossi to introduce children in Northeast Florida to the wonders of animals and nature through its paid education programs. He performs the shows during weekends, school holidays and summers at schools, daycares, camps, YMCAs, churches, libraries, parks and birthday parties.

Rossi has been an elementary school teacher since 1985. He taught science for twenty-seven years and more recently taught language arts and math. Her Wild Wonders assistant, Stephanie Nelson, is a middle school reading teacher.

Rossi regularly rotates his animals so that they do not appear in successive programs, to avoid any stress. He is fully insured and licensed by the Florida Fish & Wildlife Conservation Commission to keep, care for, and transport animals. Its animals and the facilities where they are housed are regularly inspected by the USDA.

No native animals are ever taken from the wild, which is illegal. Proceeds from Wild Wonders programs are used to care for animals and provide fuel for transportation to events. A portion of proceeds are donated to support the local Fraternal Order of Police and Jacksonville Firefighters Association fundraisers for summer camps and youth projects.

The reservation, which is part of Jacksonville and Atlantic Beach, is located west of Mayport Road. It encompasses thirty-eight acres and a wooded island in the San Pablo River estuary south of the St. Johns River. There are nature trails, a fishing/viewing pier, a canoe/kayak launch, picnic areas, pavilions, camping and a free wheelchair can be reserved.

There are other upcoming free opportunities for families to see and learn about wildlife and birds at Jacksonville’s two oceanfront parks: Huguenot Memorial Park and Kathryn Abbey Hanna Park. Huguenot Memorial Park naturalist Jolie Friedrich said a variety of birds, dolphins, seabirds, shorebirds, wading birds and crabs are typically seen on guided beach walks. naturalists proposed in the park. Walks are conducted along portions of the Great Florida Birding Trail in Huguenot from 10:00 a.m. to 11:00 a.m. select summer Saturdays: May 7, June 4, July 9, and August 6.

Another naturalist-led beach walk is offered on Saturday, July 16, from 10:00 a.m. to 11:00 a.m. at Kathryn Abbey Hanna Park. Part of the Great Florida Birding Trail is also in Hanna Park and offers spectacular birding. The Great Florida Birding Trail is a 2,000 mile collection of over 500 Florida wilderness locations. The trail protects important habitats for saving birds, promoting native and migratory bird watching, and encouraging environmental education and ecotourism.

Hanna Park is the location of another free opportunity to enjoy the outdoors, see or hear birds, owls, bats, frogs and sometimes wildlife, as well as a night area and stargazing. The Northeast Florida Astronomical Society (NEFAS) is a group of amateur astronomers of all ages whose serious hobby is observing and learning about objects in space. The non-profit group holds monthly public viewing events in the park.

“We invite the public to join us at Hanna Park on select Saturdays at 7 p.m. Bring binoculars or a telescope, or view the sky through our members’ telescopes. We also have Telescope Doctors members, who are happy to help anyone who has a problem with their telescope,” said Mike Napper. “We have approximately eighty members and welcome new ones. Our website – www. nefas.org – features resources, news, astronomy for kids, a guide to the constellations, and our calendar with free monthly public observing events Napper, president of NEFAS, is a retired engineer who has worked on NASA’s space shuttle program.

John Viescas, executive director of NEFAS, said at the group’s dark-sky remote location in the Osceola National Forest, they see bears, deer, alligators and hear coyotes, owls and nightjars. , “plus, we hear animals we can’t identify in the dark. Napper and Viescas said the Dark Sky Locator sessions are specifically for members to work on their own projects, unlike public events in the Interested parties can attend by contacting the group for instructions.They also hold a monthly meeting at FSCJ Kent Campus with a guest speaker or a multimedia presentation open to the public.

NEFAS is interested in broadening horizons through education and space observation to inform people, especially young people, about astronomy as an exciting hobby that combines space, science and technology. They offer free presentations from astronomy lecturers, or members with telescopes for a viewing session, to schools, scout troops, nonprofits, or educational organizations. There is a minimum donation for private or commercial group presentations. E-mail [email protected]

Park visitors are advised to dress appropriately for the weather and time of day, wear closed shoes, bring a hat, camera, binoculars, sunscreen, insect repellent and water. There is a $5 fee per vehicle to enter the beachfront parks. A military discount is available with state-issued military ID. Bad weather may force the cancellation of outdoor programs.

(No evaluations for the moment)