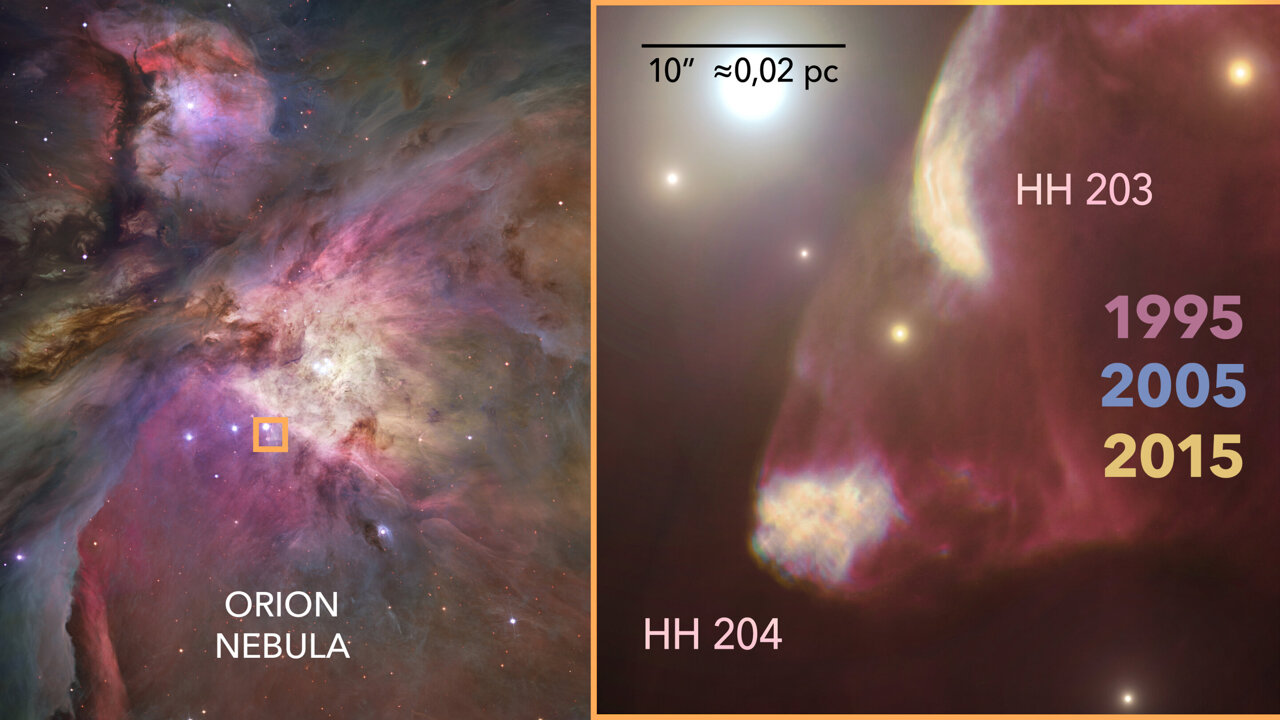 An international team led by researchers from the Instituto de Astrofísica de Canarias (IAC) has discovered, in a high degree of detail, the physical and chemical effects of the impact of a protostellar jet inside the nebula of ‘Orion. The study was based on observations with the Very Large Telescope (VLT) and 20 years of images with the Hubble Space Telescope (HST). Observations show evidence of compression and heating produced by the shock front, and the destruction of dust grains, which cause a dramatic increase in the gas-phase abundance of atoms of iron, nickel and other heavy elements. in the Orion Nebula. The results were recently published in the Astrophysical Journal.

The Orion Nebula, one of the brightest known objects in the night sky, is the closest massive star-forming region to Earth, and it has a complex and extensive gaseous structure. Some of the infant stars within it emit high-velocity jets of gas which, when impacting their surroundings, produce shock fronts that compress and heat the nebular gas. These impact zones are arc-shaped and are called Herbig-Haro objects, named after their discoverers, American astronomer George Herbig and Mexican astronomer Guillermo Haro.

These objects have already been observed in many dark nebulae, where the cold gas is neutral, and its main source of energy is the heat generated by the shock. However, the gas jets of the Orion Nebula are immersed in a wide field of radiation produced by the most massive stars of the Orion Trapezoid, located in the center of the nebula. Due to this radiation, the gas inside the shock front as well as the compressed gas after it passes are hot and ionized, allowing us to accurately measure the physical conditions and chemical composition of the jet.

Research by a team of astronomers in Spain, Mexico and the United States, led by José Eduardo Méndez Delgado, doctoral student at the IAC and the University of La Laguna (ULL), has uncovered the relationships complexes between the ionic abundances of the gas and its physical conditions in HH204, one of the most prominent Herbig-Haro objects in the Orion Nebula.

“Our work shows that in the shock front of HH204, the gas abundances of heavy elements such as iron and nickel are increased by up to 350% compared to the values ​​usually found in the Orion Nebula, and that allows us to determine the proportion of other chemical elements with more precision, which contributes to a better knowledge of the chemical evolution in the solar neighborhood”, explains José Eduardo Méndez Delgado, the first author of the article.

“In addition to the enrichment in heavy elements in the gas phase, we observed a heated post-shock zone which includes a very small fraction of the gas, and which makes it possible to understand the different layers of the structure of the Herbig-Haro object. generated by the impact of the shock front”, explains César Esteban, researcher at the IAC and co-author of the article.

“The origin of HH204 appears to be associated with one of the brightest and richest star-forming areas in the Orion Nebula, the regions called Orion South, although there are many gas interactions which seem to feed it from several directions.” adds William Henney, researcher at the Institute of Radio Astronomy and Astrophysics of the National Autonomous University of Mexico and co-author of the article.

“Thanks to images from the Hubble Space Telescope, we have shown that HH204 propagates at an angle of 32 degrees with the plane of the sky, which allows us to observe the compression of the gas transversely as it approaches the shock front”, points out Karla Arellano Córdova, researcher at the University of Texas at Austin and co-author of the article.

“We have seen that the impact of these objects can be important when determining the local physical conditions in ionized nebulae. In fact, if we do not take these effects into account, we can make incorrect determinations of the chemical composition ionized nebulae, which are fundamental techniques for understanding the chemical evolution of the Universe”, summarizes Jorge García Rojas, researcher at the IAC and co-author of the article.

Quote: Anatomy of the impact of a protostellar jet in the Orion Nebula (September 6, 2021) retrieved on January 29, 2022 from https://phys.org/news/2021-09-anatomy-impact-protostellar-jet- orion.html