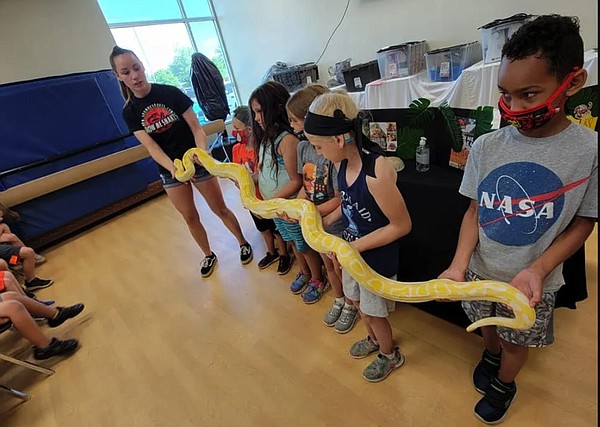 A traveling reptile show will creep into the fairgrounds on Saturday

TEXARKANA, Ark. — Reptiles, especially snakes, do not always give people warmth and fuzziness.

But Micky and Tamara Meyer of St. Louis, who present the Show Me Reptiles & Exotic Show at the Four States Fairgrounds on Saturday, hope to allay people’s fears and even get them to choose a snake or other animal on display as a pet.

The event typically draws 500 to 1,000 people a day as it tours the country, Micky said.

“We have about a dozen different vendors and different animals,” he said. “We have ball pythons, lizards, geckos and turtles. Really there is something for everyone and they all come here for different reasons. We have been doing these shows since 2014. And I hope they gain a new respect for reptiles or overcome their fear of reptiles.”

Micky said people will have the ability to touch snakes, and he has seen children and adults change their attitudes once they overcome their fear of snakes.

“A lot of times I’ve seen people hold a snake, then they buy one and they’re not scared, and they get a new pet,” he said.

One of the most recognizable snakes that will be at the show is the ball python. They are priced between $50 and $25,000, Micky said.

Constrictors are “very nice,” Micky said, though that’s not always how they’re portrayed.

“The ‘Anaconda’ movie was pretty inaccurate,” he said. “They’re not going to wrap people up and kill them. It’s very rare for people to be forced to death by a snake. Snakes just get a lot of bad press, and often times it’s very easy for people to get scared. what they don’t know, so they’re scared. We provide some education.

Tamara Meyer said she and her husband had loved snakes all their lives and grew up in the woods catching and playing with them. When they got married, they noticed what the world of snake shows was like and wanted to expand on what was there, she said.

“We thought the reptilian industry needed more than it was. It felt like a pet business, but we wanted to bring more experience to people,” she said. “If I went to a show as a kid I would think it was cool to see a reptile show and we try to make it more educational than anything else.”

She said attendees would have the chance to learn more facts about reptiles.

“Periodically, a booth with artifacts and other different vendors will come out to share their knowledge of the basics of a ball python, and they will diagram a turtle body and explain how they are put together at different times of the day,” said she declared. “We want people to have more depth and knowledge about these animals.”

“I’m really excited to see them back,” Garner said. “They put on a really fun show, and it’s interesting to get out there and see the reptiles. They had everything, but a great variety of reptiles.”

The show starts at 9 a.m. for VIP ticket holders and runs from 10 a.m. to 3 p.m. for other spectators. Tickets are $12 for VIPs and $10 for the public. First Responders and Military receive 50% off the standard ticket price. Children 12 and under enter free.

For more information on the traveling show, go to showmesnakes.com.